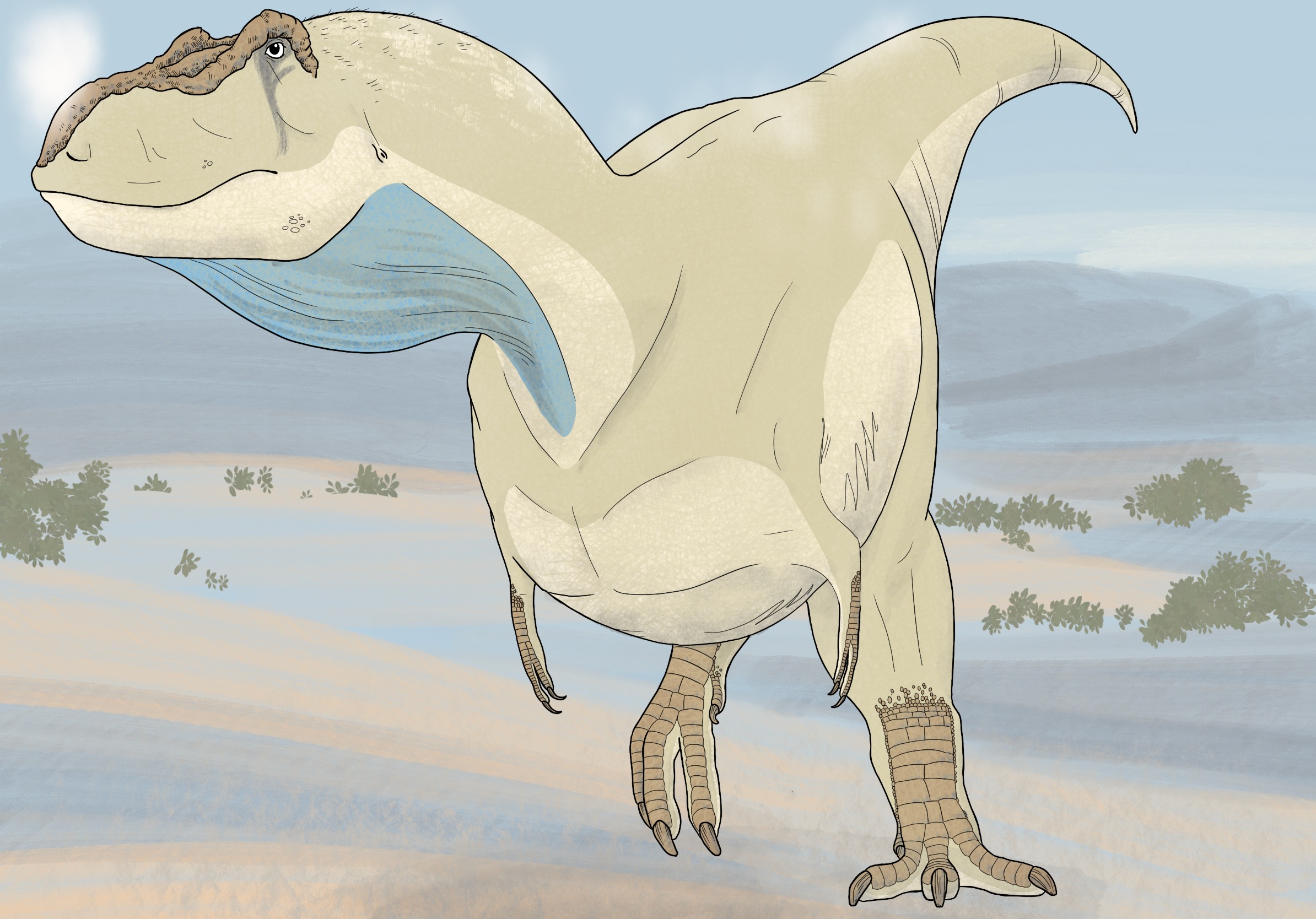 I hope you’ve been watching Prehistoric Planet, the new BBC documentary series narrated by Sir David Attenborough, and the spiritual successor to Walking With Dinosaurs. The animation is spectacular, the dinosaurs are modern and behave like animals, and some of the speculations are straight out of All Yesterdays. I’ll write a post with my thoughts on the series in a couple weeks, but for now I’m going to focus on one of the dinosaurs featured in the “Deserts” episode: Tarbosaurus. (I actually wanted to do a profile of Tarbosaurus before the show came out, but now I can also talk about how it was portrayed for some extra content! Fortuitous!)

Tarbosaurus (meaning “alarming reptile”) was the top predator in Latest Cretaceous China and Mongolia, filling a similar (though not exactly the same, as we’ll see later) role as its relative Tyrannosaurus did in North America. These deep-skulled, peg-toothed, barrel-chested, tiny-armed predators were built for walking long distances in pursuit of large prey–in North America, Tyrannosaurus would have taken down Edmontosaurus and Triceratops, while in Asia Tarbosaurus hunted sauropods like Nemegtosaurus and Opisthocoelicaudia as well as hadrosaurs like Saurolophus and even the giant ornithomimosaur Deinocheirus. 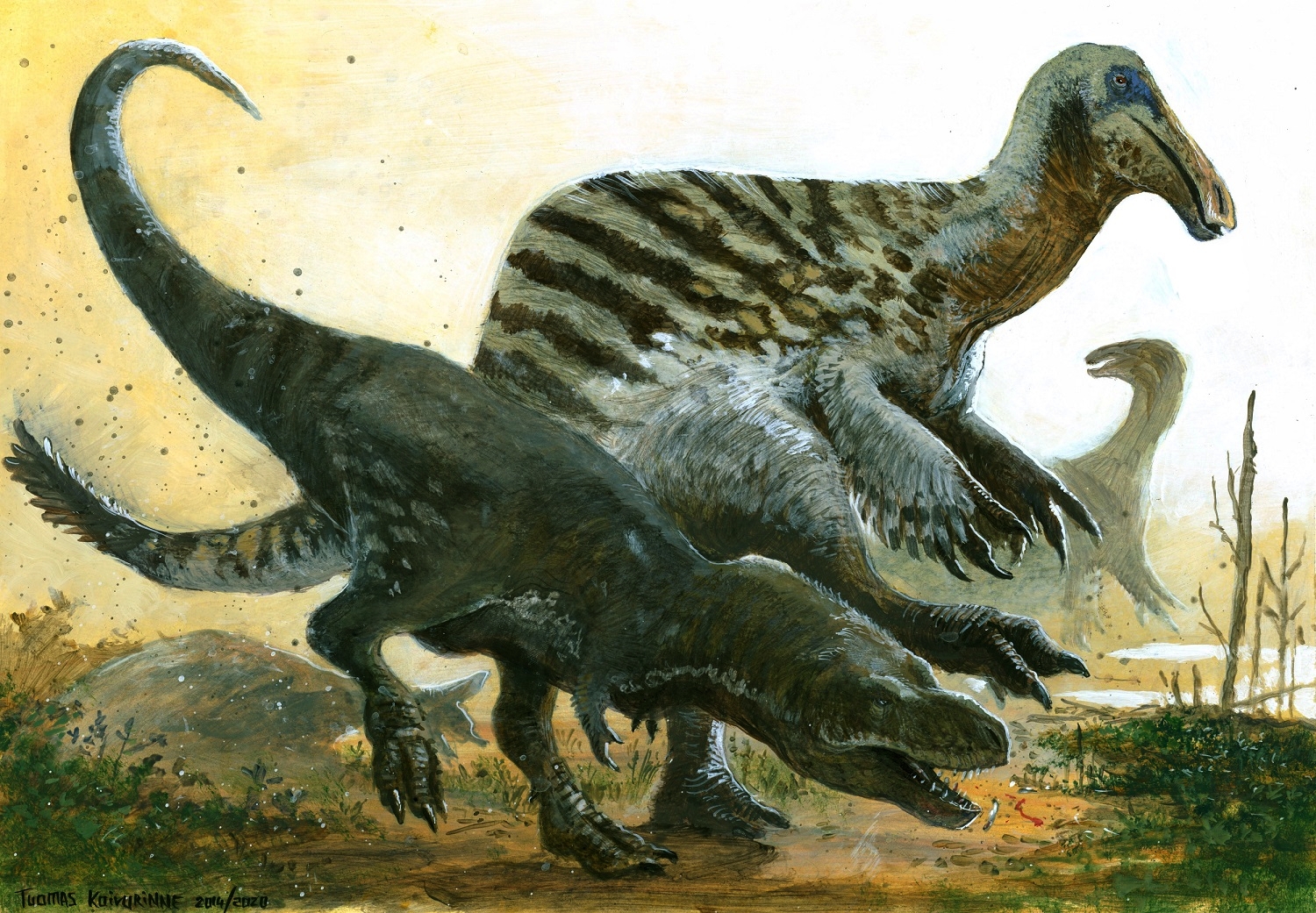 Above: Tarbosaurus gets the boot from Deinocheirus. Don’t mess with the mooseduck!

However, while these two tyrant reptiles have a lot of superficial similarities, there are notable differences between them as well. This makes their evolutionary relationships convoluted and constantly being revised. Here’s a handy chart to get us started:

Since Tyrannosaurus and Tarbosaurus look so similar at a glance, Tarbosaurus was initially classified as a species of Tyrannosaurus, and is still sometimes referred to as such (especially when marketing is important, due to the superior name recognition). But digging deeper, the large differences in their skull mechanics suggest that maybe they aren’t as closely related as originally thought. The much smaller, long-snouted contemporary Alioramus is the only known tyrannosaur that shares the jaw locking mechanism and the details of Tarbosaurus’s bite force transmission. But the way the tyrannosaur family tree is currently organized places Alioramus on a distant branch and Tarbosaurus nested deep within a group containing other large-bodied, deep-snouted animals. If Alioramus is in fact Tarbosaurus’s closest relative, the tree will have to undergo quite a shuffle.

There’s a slightly more ancient large-bodied, deep-snouted tyrannosaur known from China, called Zhuchengtyrannus, which shares its jaw features with Tyrannosaurus rather than Tarbosaurus, confusing things further. It’s possible that Zhuchengtyrannus is a cousin of Tyrannosaurus whose ancestors migrated across the Bering land bridge from North America, and after it died out, Tarbosaurus convergently evolved bone-crushing features. Or, Tarbosaurus evolved Alioramus-like jaw features convergently, for some reason possibly related to being small relative to its prey size.

Unlike Tyrannosaurus, which definitely could see you even if you were not moving, Tarbosaurus seemed to rely more on its other senses to hunt. Tyrannosaurus’s skull flared in the back, allowing its eyes to face forward and granting good depth perception, while Tarbosaurus’s skull was more slender side to side, and its eyes faced mostly sideways. Endocasts of the two animals’ brains also show that while Tyrannosaurus had well-developed brain structures associated with vision, Tarbosaurus did not. And despite the fact that Tarbosaurus was less than half the weight of Tyrannosaurus, it took on larger prey: while the largest thing Tyrannosaurus had available to it was the up-to-9-tonne Edmontosaurus, the Asian sauropod Opisthocoelicaudia would have weighed 20 to 25 tonnes. This, coupled with the fact that Tarbosaurus adults were much more common in their environment than juveniles, while with Tyrannosaurus the opposite was true, indicates that their hunting styles and lifestyles were quite different. Perhaps Tyrannosaurus was a more solitary hunter, while Tarbosaurus was more cooperative. (This is the stance taken in Prehistoric Planet.)

In spite of the fact that Tarbosaurus had proportionally the tiniest arms of any tyrannosaur, stress fractures on the hand bones of one fossil suggest that they habitually used their hands for something. Or at least that one specimen did–it’s possible that it was some kind of tic.

A study on the one known juvenile Tarbosaurus specimen’s sclerotic rings, or eye bones, suggested that it might be nocturnal or crepuscular (active at dawn and dusk); it seems likely that the adults would have been as well, given the harshness of daytime in their desert environment. (Sclerotic ring material isn’t known from any adult specimens.) That’s why I depicted my Tarbosaurus in the page image up top as being up in the early dawn. Maybe he is finding a nice shady spot to sleep away the heat of the day. I also gave him a speculative dewlap, since one specimen was reported to preserve some kind of gular pouch or other soft-tissue throat structure, but this claim was never officially published. I gave him open-habitat countershading as well–clean lines, with the white of the belly starting high up on the side body.

In Prehistoric Planet, Tarbosaurus is featured in a couple of scenes in the “Deserts” episode. First, a pride of Tarbosaurus are shown napping around a sauropod carcass in the blistering midday heat, guarding it from circling pterosaurs and prowling Velociraptor, while the flies buzzing all around attract lizards. That scene is cool for a couple reasons. It displays the entire desert food chain, reminding the audience that dinosaurs lived in a complex environment with many trophic levels much like today. And the carcass-guarding behavior shown is quite a common carnivore habit; lions and hyenas, among others, are known to do this (Tarbosaurus is likened ecologically to lions in many ways during this episode). My only complaint is that all the animals are out in the sun during the stated 60C (140F) summer heat. The Tarbosaurus are at least resting to keep their body temperatures down, but couldn’t they be resting in the shade of the boulders that are everywhere in the landscape? 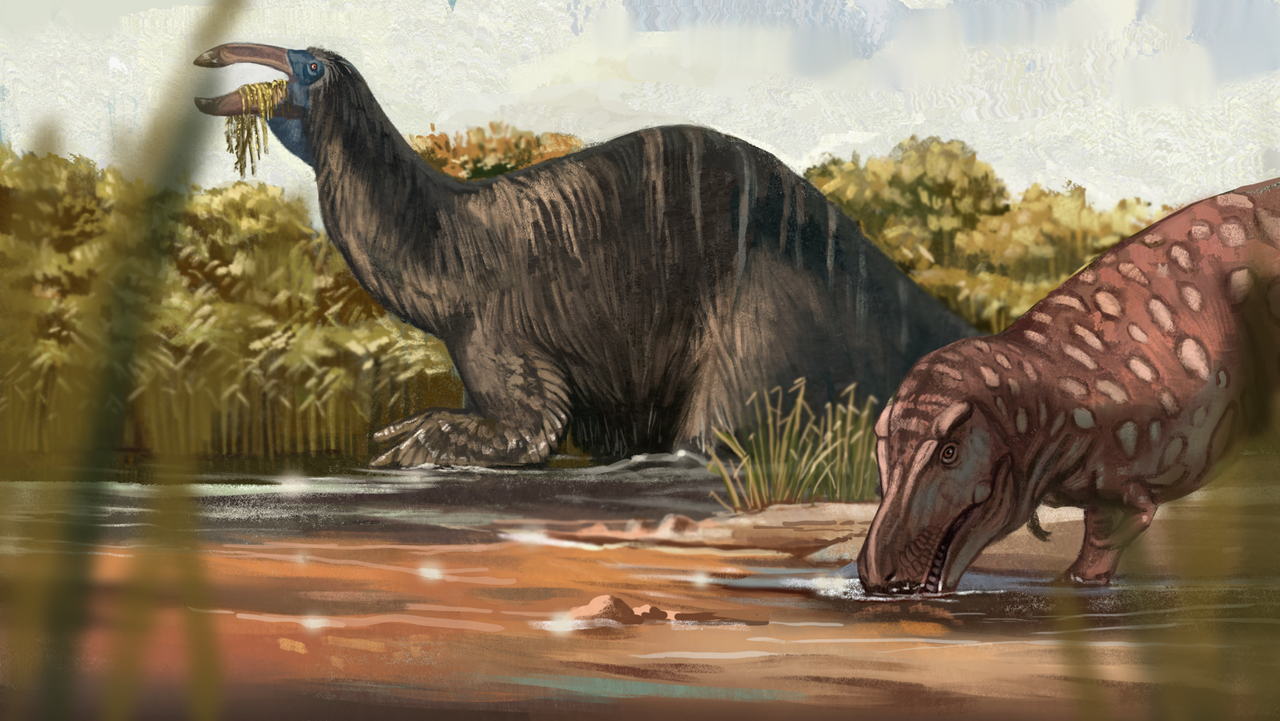 Above: While Tarbosaurus and Deinocheirus never met in the show, they did meet in real life.

In the second scene, lots of herbivores are gathered at a watering hole that’s temporarily pooled in the high desert. A lone Tarbosaurus appears in the distance, and the music makes you think it’s going to attack and spoil the party, but instead it just comes and gets a drink while the herbivores give it a wide berth. This is another tableau from the modern African savanna with large mammal roles switched out for dinosaurs–zebras, giraffes, elephants, and other large herbivores congregate at watering holes, and when lions show up everyone usually manages to keep the peace. (It’s often the rhinos that cause the most trouble.) I like the way that the Tarbosaurus is shown to drink by scooping, like a bird. 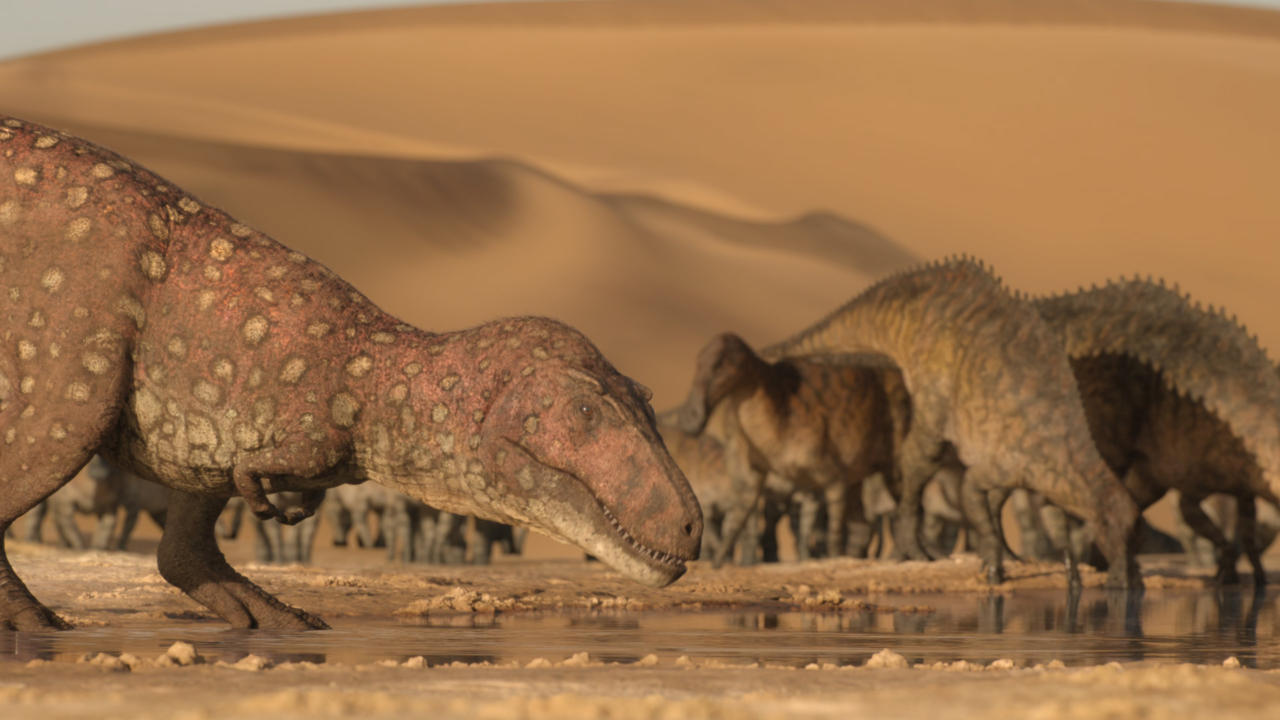 In terms of how Tarbosaurus looks, I wouldn’t say it’s a particularly attractive creature design, but you can’t fault the scientific accuracy. Its head and body are significantly differently shaped than the show’s model of Tyrannosaurus–the head is much slimmer, with the characteristic sideways-facing eyes, and the body is a lot less barrel-chested. While Tyrannosaurus is completely featherless, as is the consensus nowadays due to numerous skin impressions, Tarbosaurus has a smattering of mangy-looking bristles that would help to dissipate heat like radiator fins (this is why elephants retain their sparse hair). This is a cool idea that takes our modern knowledge that ancestral tyrannosauroids were fully feathered and applies it to make adaptive sense in the context of the desert environment. I’m not a huge fan of the jaguar-like spots–and in general, this show probably overrepresents spotted and striped animals for the sake of pretty visuals–but I think they were intended to be reminiscent of those of spotted hyenas, suggesting convergence, given their similar ecological niche.

And while Tyrannosaurus is shown alone, in pairs, and with juveniles, Tarbosaurus is shown living in a pride of multiple adults, which is consistent with the fossil evidence. Overall, a very admirable portrayal of this dinosaur!

Another claim to fame for Tarbosaurus was its involvement in celebrity auctions and fossil poaching scandals between 2007 and 2012. Mongolia and China have strict laws about removing fossils from the country in which they’re found, and since Tarbosaurus is known only from those two countries, fossils belonging to that genus that turn up anywhere else in the world are definitely smuggled. Against a background stream of other, lower-profile smuggled fossils coming out of Mongolia, a Tarbosaurus skull illegally taken from Mongolia, advertised as “Tyrannosaurus bataar” for added sexiness, got bidded up to $276,000 in a showdown between two anonymous private collectors. These turned out to be Nic Cage and Leonardo DiCaprio, bidding anonymously over the phone, and Cage won. DiCaprio begged the seller for another skull, which he obligingly procured, mounted, and sold for an even higher price.

In 2012, though, the Tarbosaurus seller’s luck ran out when he posted a complete skeleton for auction, priced at a cool million dollars. The scientific community and the Mongolian government rallied around this one specimen as the final straw, stopped the sale, repatriated the skeleton, and sent the smuggler to prison. This inspired a crackdown on other stolen fossils, resulting in many specimens being repatriated into Mongolia and China. 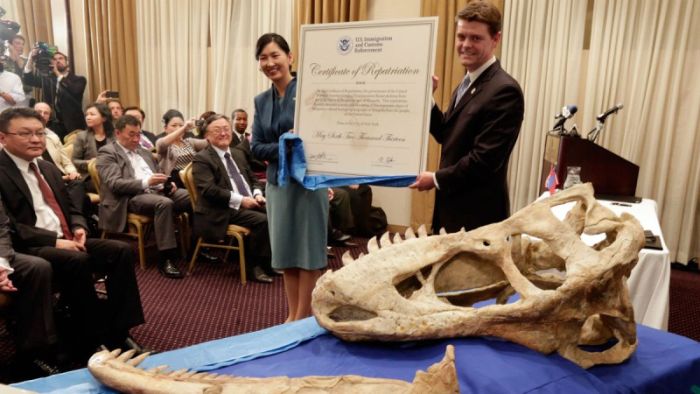 Above: Nic Cage’s Tarbosaurus skull at its official repatriation ceremony.

A much more detailed and sympathetic view of the fossil smuggling phenomenon, and a biography of the Tarbosaurus man in particular, can be found in the book “The Dinosaur Artist”, by Paige Williams.