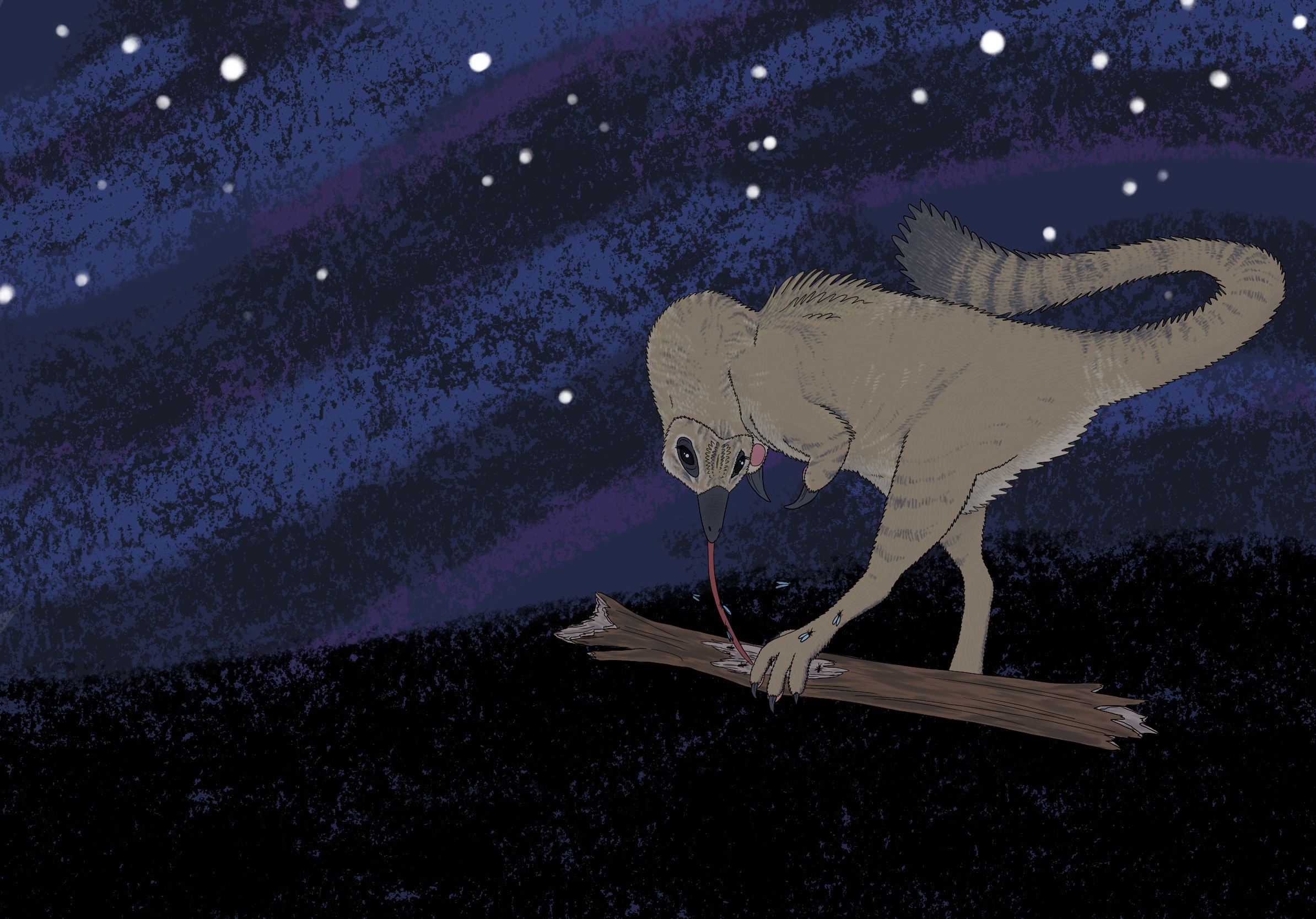 You may have heard the news about the new research done on Shuvuuia’s sensory capabilities, with headlines such as, “Tiny dinosaur that looked like an owl hunted like one, too” and “Desert-Living Dinosaur Had Extraordinary Vision and Hearing”. But there’s a lot more to this little dinosaur, and the group it belongs to, the alvarezsaurids, than this, so I thought I’d do an Obscure Dinosaur Profile to provide a bit more background.

Shuvuuia (“shoo-VOO-ya”) was a 2-foot-long alvarezsaurid theropod from Late Cretaceous Mongolia, and would have lived alongside the famous Velociraptor and Protoceratops in a desert environment. Alvarezsaurids were very small bipedal dinosaurs with long legs and short, powerful arms with one single giant finger on each side. What they did with these claws has long been the subject of debate, with some suggesting they were egg specialists:

And others suggesting they were burrowers, but now the consensus favors the hypothesis that they were myrmecophages, or insectivores specializing on ants and termites. Several features common to modern myrmecophages such as anteaters, pangolins, and echidnas are also present in alvarezsaurs: no teeth in the front of the mouth, the better for wielding a long tongue; reduced and simplified teeth; and long, narrow, weak, simple jaws, good for invading insect nests and bad for chewing, since they swallow their tiny prey whole. Shuvuuia had all these characterstic adaptations.

Back in the Cretaceous, wood-burrowing termites were common; while ants existed, they didn’t make up a large proportion of the insect population, and mound-building termites lived only in the tropics, while alvarezsaurs lived much further north. So alvarezsaurs are thought to have used their claws to rip open rotting wood to access the termites inside (as depicted in the page image).

Shuvuuia was unearthed during the height of the feathered dinosaur revolution in the late ’90s, when the massively productive fossil deposits in China and Mongolia were first being studied. Before this period, the only animals thought to have had feathers were birds; by the turn of the century, all sorts of non-avian dinosaur fossils with exquisitely preserved feathers had been described, such as the small therizinosaur Beipiaosaurus and the red-panda mimic Sinosauropteryx. When the first alvarezsaurids were discovered, they were thought to be flightless birds, since they had feathers as well as features in some bones that would have supported powerful chest muscles, adaptations that are shared with flying birds. However, powerful chest muscles are also important in digging, and additional discoveries of basal alvarezsaurs such as Haplocheirus supported their phylogenetic placement far outside of birds, closer to the base of the maniraptoriform family tree.

A major complaint against the “pickaxe hypothesis” is that alvarezsaurs’ arms just look so short. Their bodies would be so close to the termite-infested wood–wouldn’t they suffer bites and stings? Could their arms even reach past their head?

It’s actually advantageous for a digger’s arms to be the minimum length required to do the job, due to the principles of leverage. The “in-lever” in this case is the back of the elbow where the tricep attaches, which is very long in alvarezsaurs, and the “out-lever” is the rest of the forearm and hand. The longer the in-lever relative to the out-lever, the more powerful and slow the stroke. Alvarezsaurs’ lever ratio (known as mechanical advantage) is comparable to that of modern myrmecophages. 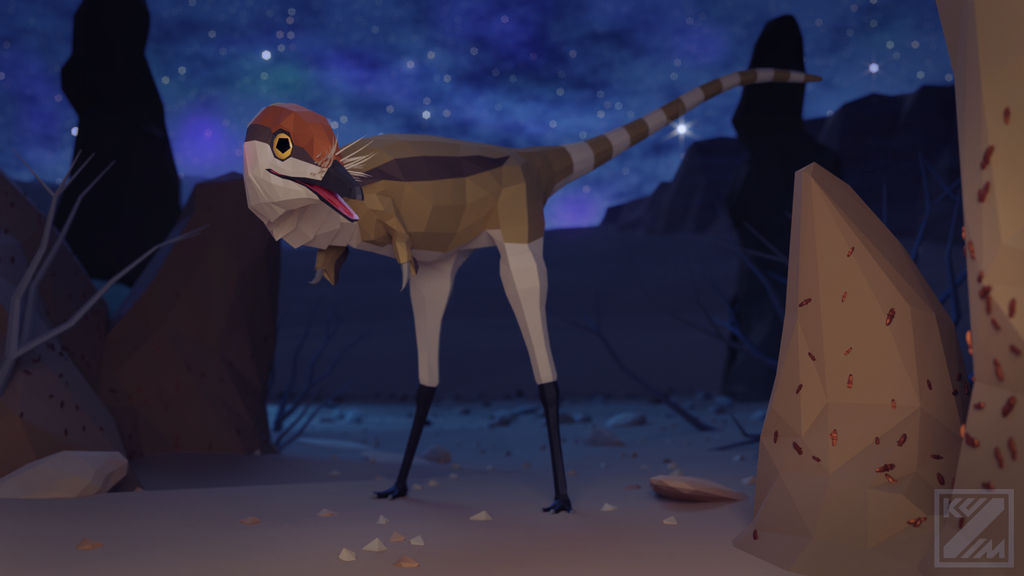 The most recent study that brought Shuvuuia back into the limelight was a comprehensive study on the sensory capabilities of many dinosaurs, including birds, that compared the relative length of their inner ear canals and ratio of inner to outer diameter of their scleral rings (eye bones). The team did not intend to highlight Shuvuuia, but it ended up standing out for its super-sized eyes and ears, comparable to those of a modern barn owl. According to the authors, Shuvuuia would likely have been able to operate in heavy darkness, and opportunistically hunted small vertebrates and insects to supplement its termite diet. Its long legs would have helped it travel great distances from one food source to the next, since the distribution of termite nests would’ve been patchy. Perhaps it even could’ve hopped like a jerboa or like Scleromochlus, given that long-legged desert animals repeatedly evolve this form of saltatorial locomotion.

An interesting thing to note is that more ancient alvarezsaurs like Haplocheirus had scleral ring diameter ratios equal or larger than Shuvuuia’s, but lacked the increased hearing acuity. On the other hand, many of the dinosaur groups studied had moderately lengthened inner ear canals, such as tyrannosaurids, dromaeosaurs, and troodontids, while today the only dinosaurs with long canals are owls and members of the nightjar family. Either hearing was much more important in the Mesozoic than it is for most birds, or birds are less capable of evolving longer ear canals for some reason, or a disproportionate number of Mesozoic groups had nocturnal habits. Maybe something else is going on here that we don’t understand.

I used to think scleral ring studies were not to be trusted because they predicted Microraptor was nocturnal and then the melanosome study indicated that it was iridescent, and therefore probably diurnal (since nocturnal animals have no need to be shiny). But reading more deeply into the scleral ring literature, it turns out that the scleral ring predictive model used only has 92% accuracy, which is much better than random chance but still leaves a large margin of error. And melanosome studies are even less certain, at a stated 82-86% predictive accuracy, but probably less in actuality due to the human component of deciding what counts as a melanosome and what is matrix or bacteria or plant matter. So, now I’m agnostic about whether or not Microraptor was nocturnal, shiny, or both; hopefully new data can provide more insight into this in the future.