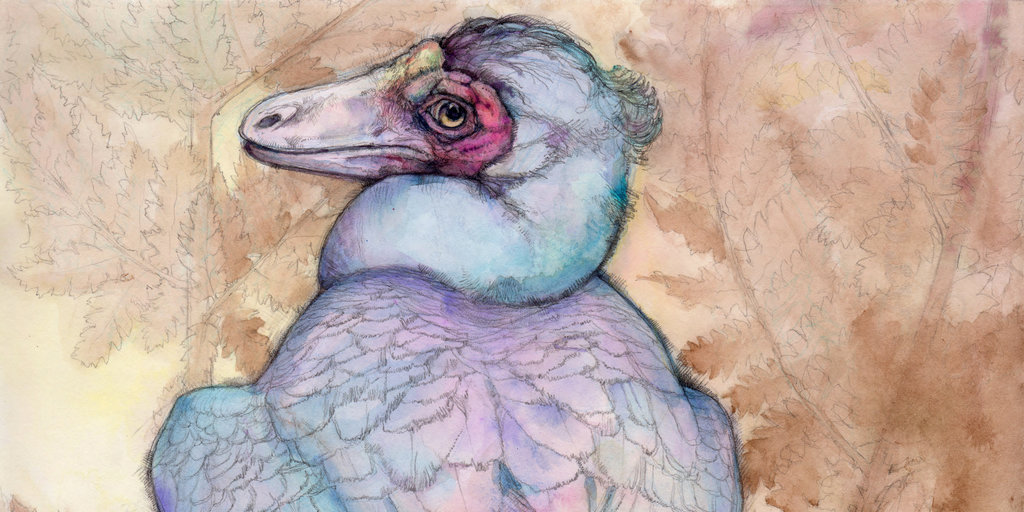 “If truth were a crayon and it were up to me to put a wrapper on it and name its color, I know just what I would call it–dinosaur skin.” So begins the novel So B. It (Sarah Weeks, 2007) whose central message is that there are some things you just can’t know, and it’s better to just enjoy what you can instead of being dissatisfied with what you can’t.

However, as of the very next year after that book was published, dinosaur skin is not one of those things. Thanks to amazing new fossil finds that preserve soft tissue and integument, as well as new techniques for analyzing existing fossils, we actually can know what color dinosaurs were, under certain rare conditions. Here, I’ll go over a few accurately-colored dinosaurs and how we know what we know. Keep in mind that this is by no means a comprehensive list of known dinosaur colors; I’ve just chosen examples that are particularly exciting or historically important.

Melanosomes are organelles (remember organelles from school? Other examples of organelles are mitochondria and chloroplasts) found within certain skin cells of animals, and are responsible for coloration. There are two main types: eumelanosomes, responsible for black and gray hues, and phaeomelanosomes, which produce yellow, red, and brown (white is produced by lack of melanosomes). Thankfully, even though the actual colors are lost during the fossilization process, eumelanosomes tend to be rod-shaped while phaeomelanosomes are rounded, allowing paleontologists with microscopes to identify them in particularly well-preserved fossils. Their arrangement and size also affect what color is produced. By comparing fossilized melanosomes to those found in living animals through a technique pioneered by Jakob Vinther in 2008, scientists have been able to splash a little color on the prehistoric world. 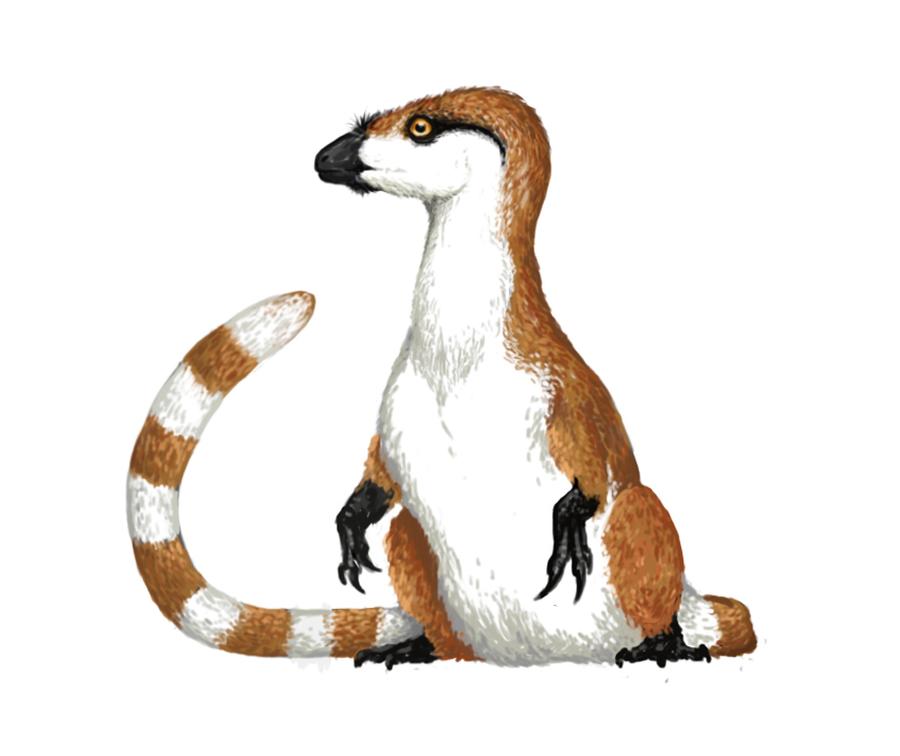 After the discovery of fossilized melanosomes in 2008, the race was on to paint the first dinosaur. A team rival to Vinther’s led by Fucheng Zhang in 2010 examined the melanosomes in a little compsognathid from Early Cretaceous China called Sinosauropteryx, which was historically important as the first non-bird dinosaur to be discovered with preserved feathers back in 1996. Happily, Sinosauropteryx’s coloration ended up being pretty exciting–it was a red panda-mimic dinosaur, with a bandit mask and a long ring tail!

The red back / white stomach coloration is an example of countershading, a common technique for hiding from predators. When the sun hits your darker back while your lighter stomach is in the shade, it creates an optical illusion of flatness that helps to obscure your shape. Many, many modern prey animals exhibit countershading, so it makes sense that dinosaurs would also have used this technique.

Note: Why are ring tails so popular in nature? It might have to do with math. 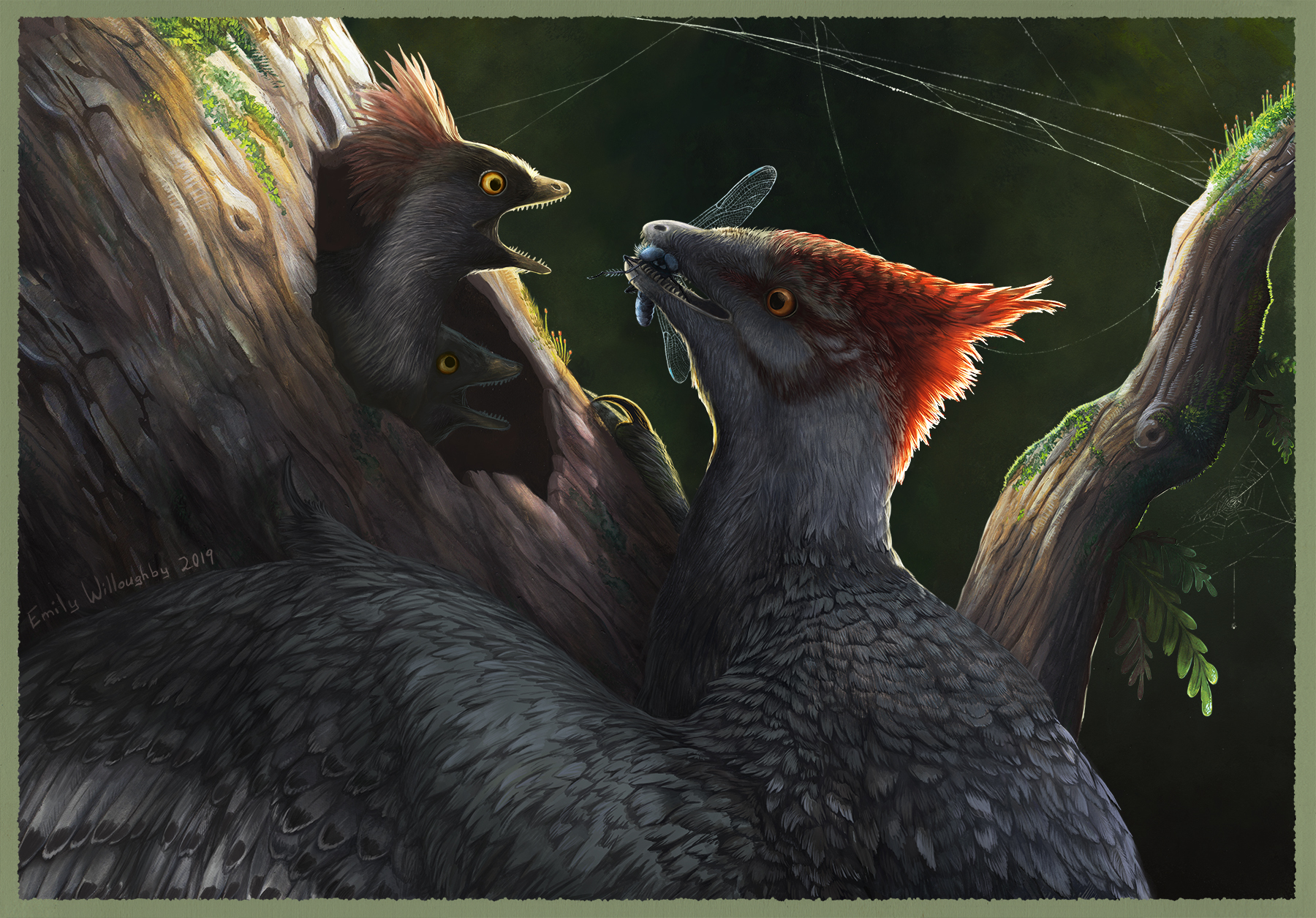 A week after Zheng’s team published, Vinther’s own team announced the results of their melanosome examination. They looked in great detail at the Late Jurassic paravian dinosaur Anchiornis, which is known from hundreds of exquisitely-preserved fossils, taking melanosome samples from all over the body to create a comprehensive picture. Anchiornis is colored like a woodpecker–mostly black body, with white-spangled wings and a red crown. The fact that it’s so uncannily similar to the coloration of modern woodpeckers, to whom it’s not super closely related, is why it’s shown using a tree hole nest in the picture above. Maybe something about the woodpecker lifestyle makes this coloration advantageous.

In 2011, a ridiculously well-preserved ankylosaur mummy from the Early Cretaceous was unearthed in Alberta. It took five years to prepare the fossil for study, and it was finally given a name (and a color) in 2017–Borealopelta. Melanosomes in the skin of Borealopelta showed that it was rusty red, and also countershaded. This indicates that it still needed to hide from predators, despite being 3,000 pounds–the size of a small rhino! Modern animals that large don’t bother with countershading because there’s really nothing large enough around to threaten them. (The largest terrestrial predators today cap out at around 2300 pounds for the saltwater crocodile, and 1500 pounds for the polar bear. The large carcharodontosaurs of the time that may have threatened Borealopelta got up to 13,000 pounds!) And that indicates that Borealopelta’s armor was not just for show, and that the Cretaceous was a very scary time.

Microraptor was a four-winged flying dromaeosaur from Early Cretaceous China. A study in 2012, also by Vinther, revealed the first evidence of prehistoric iridescence–Microraptor’s melanosomes were arranged in a particular pattern found in modern iridescent birds. This dinosaur was shiny black like a crow! That indicates that Microraptor was probably diurnal, since nocturnal animals have no reason to be iridescent.

As more time passes, more fossils turn up, and more specimens get examined for preserved melanosomes, we’ll continue to get a better picture of what colors prehistoric creatures were. Though some may be surprising, like Borealopelta’s countershading, it seems that more often, the same styles have been popular throughout history over and over again.