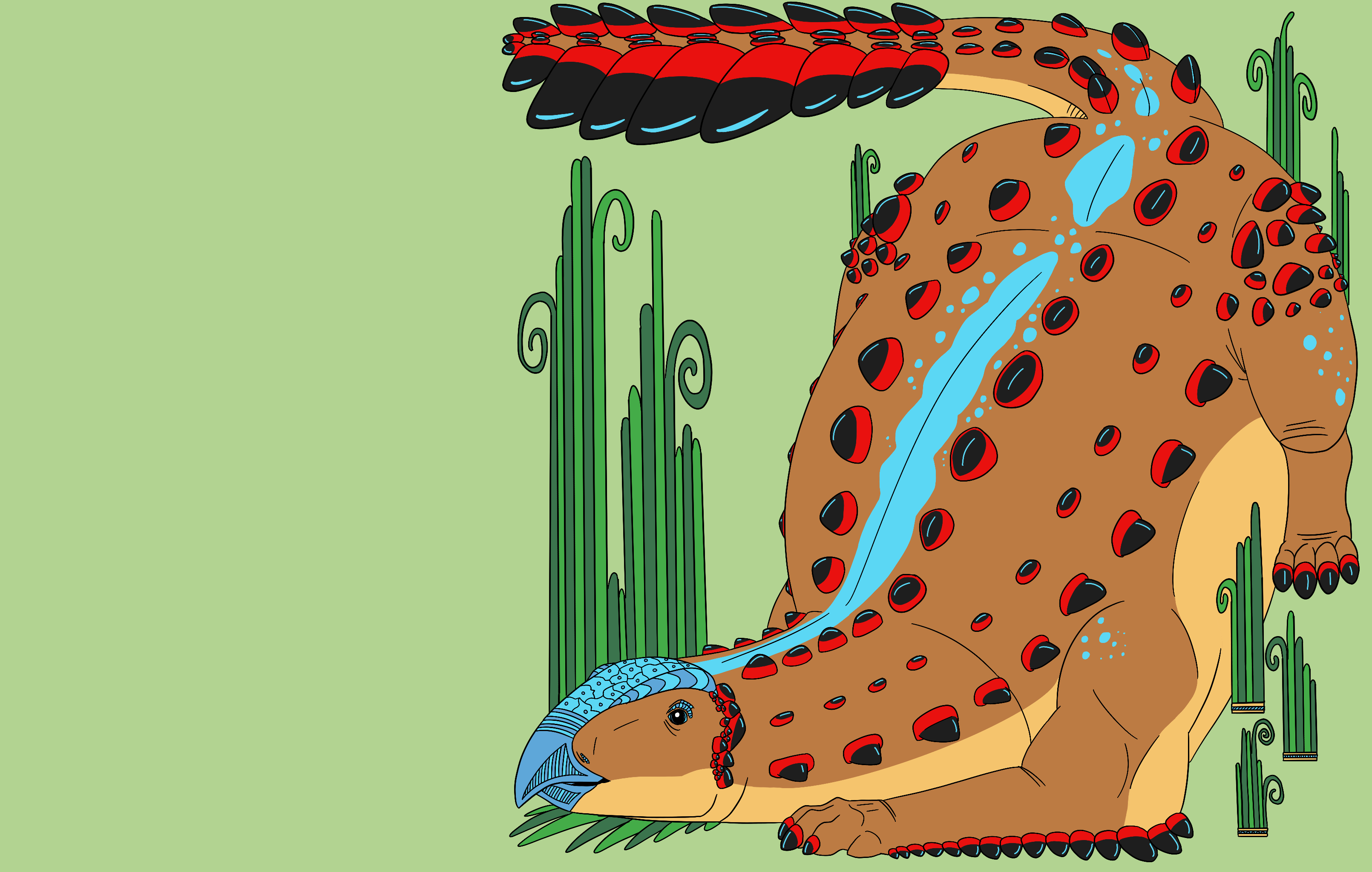 You’ve probably heard of Ankylosaurus, the club-tailed, low-slung, armored, tank-like dinosaur that lived alongside Tyrannosaurus and Triceratops. Its larger family, the Thyreophora (“shield bearers”), contains Stegosauria (plate-backed, tiny-headed dinosaurs, including Stegosaurus), which split from ankylosaurs in the Early or Middle Jurassic and peaked in the Late Jurassic, and Ankylosauria, which is split into Nodosauridae (clubless armored dinosaurs like Borealopelta and Denversaurus) and Ankylosauridae (club-tailed armored dinosaurs like Zuul and Ankylosaurus). Those groups were relatively well-separated and believed to be well-understood until very recently, when two brand-new, very weird basal ankylosaurs were described at the very end of 2021: Stegouros and Spicomellus.

Before we get into the ways Stegouros and Spicomellus are weird, we have to know what “normal” ankylosaurs were like. Their armor consisted of osteoderms, or bones that grew in the skin–similar to croc or armadillo armor today. This armor was not attached to the underlying skeleton, allowing the animal to move and bend relatively freely. While most ankylosaurs had armor consisting of knobby and keeled plates, some nodosaurs, such as Sauropelta, sported huge neck and shoulder spikes with blade-like sharp edges, and some, such as Polacanthus, had a large, fused “saddle” of bone over the hips. Later ankylosaurs lacked this saddle, indicating that whatever function it had as armor was somewhat weakly selected for, or perhaps incompatible with a tail weapon. 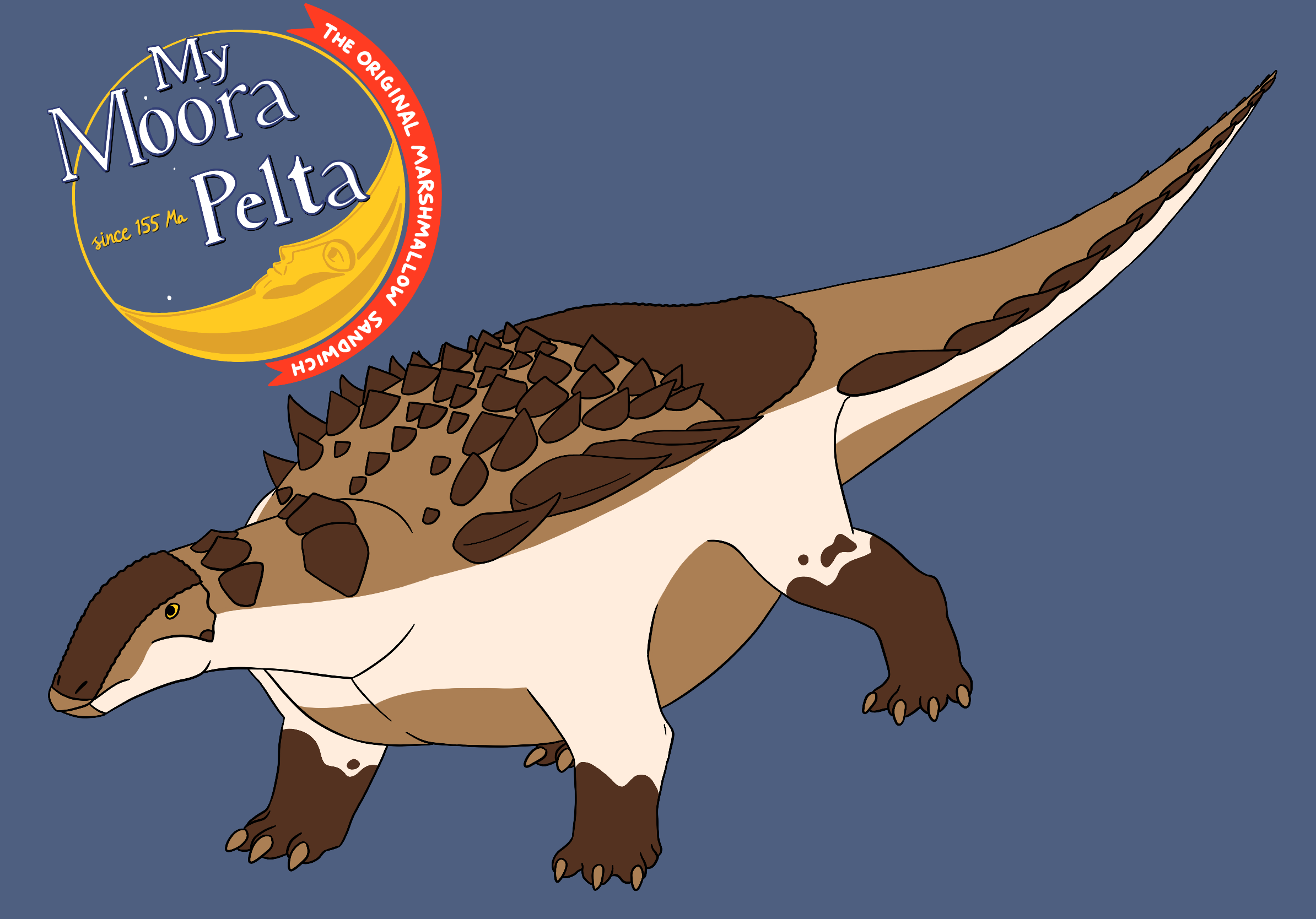 The clubbed tail that ankylosaurs are famous for arose over 100 million years ago, first seen in the mid-Cretaceous Jinyunpelta. It consists of a club, made of three or four lobes of bulbous osteoderms, and a handle, made of stiffened, interlocking vertebrae and ossified tendons, which is necessary for withstanding the forces generated by the club’s strike. A recent study by ankylosaur queen Victoria Arbour and the esteemed Philip Currie provided evidence that the handle evolved first, independently selected for, since a strike from just a handle would have been pretty painful in its own right, and the club was added on later. Ankylosaurs from the early to mid-Cretaceous such as Gobisaurus show this handle-only, stiffened tail aspect.

While biomechanical studies have shown that ankylosaurs could swing their clubs hard enough to break even Tyrannosaurus ankles, there so far hasn’t been any unequivocal evidence of such an injury. The famous Sue specimen has a broken leg that subsequently got infected and then healed, but the break doesn’t look like something that a club strike would have caused. However, we do have some evidence for ankylosaurs whacking each other with the clubs in the form of broken and healed osteoderms at about the right height and location on the body. The hypothesis of tail clubs as tools for intraspecific competition is also consistent with the observation that they grew allometrically, meaning young animals were born without them and developed them rapidly during puberty.

Despite an abundance of ankylosaur fossil material due to their many hard parts, many ankylosaurs’ life appearance is unknown. This is because the osteoderms, not being attached to the skeleton, scatter all around during the fossilization process, and putting the puzzle pieces back together correctly is impossible without more information. That means a lot of ankylosaur reconstructions are just guessing where the various armor pieces go! We do have a few ankylosaur “mummies”, such as Borealopelta and Zuul, which preserve the armor in situ, which help inform the reconstruction of related genera. 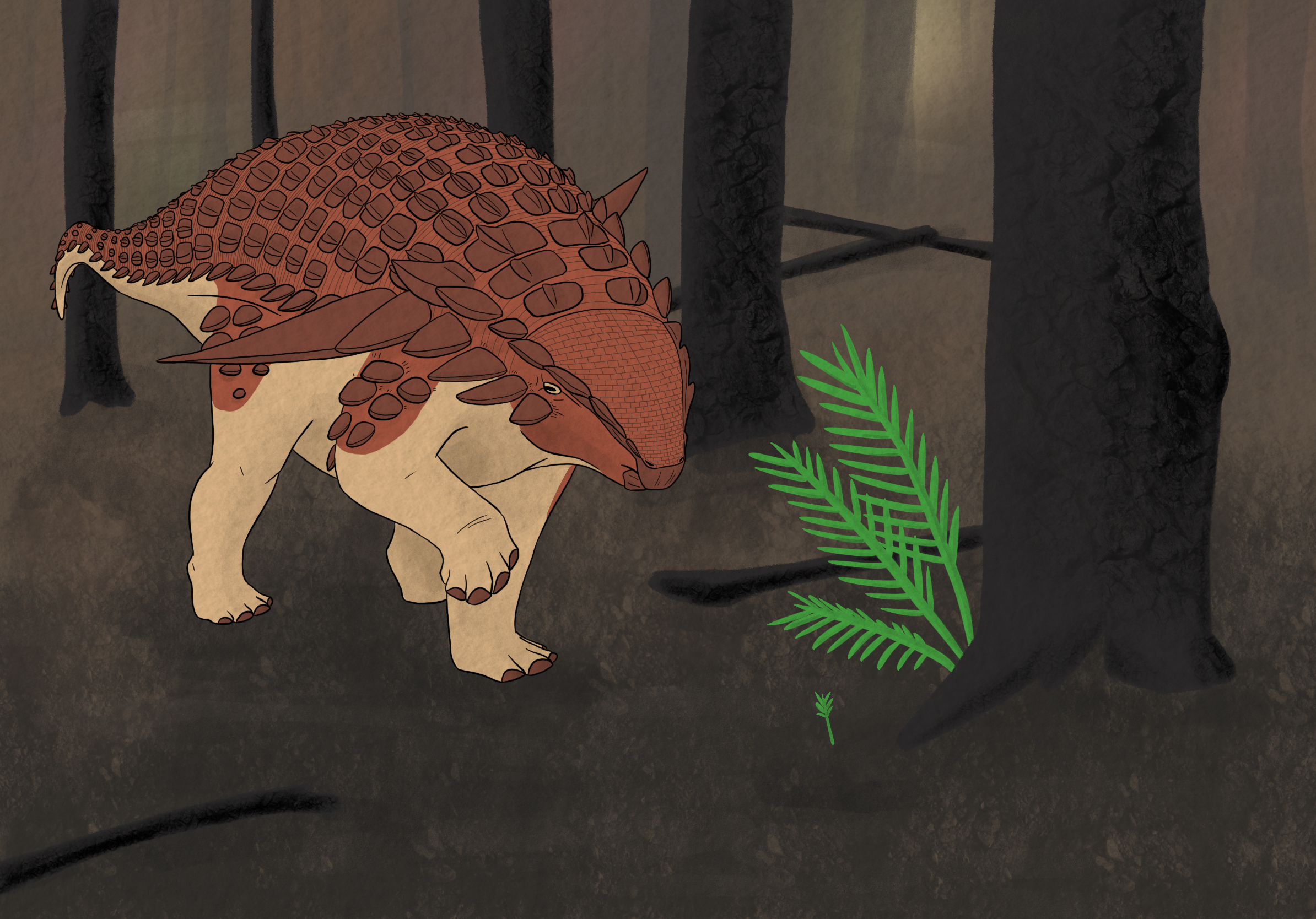 Compared to Stegouros, Spicomellus got a lot less news attention. However, if it is what we think it is, it’s a very interesting find. The fossil consists of just a single rib, sold to scientists in pieces by a Moroccan fossil dealer. When pieced together, it looks a lot like a stereotypical spiked dog collar: 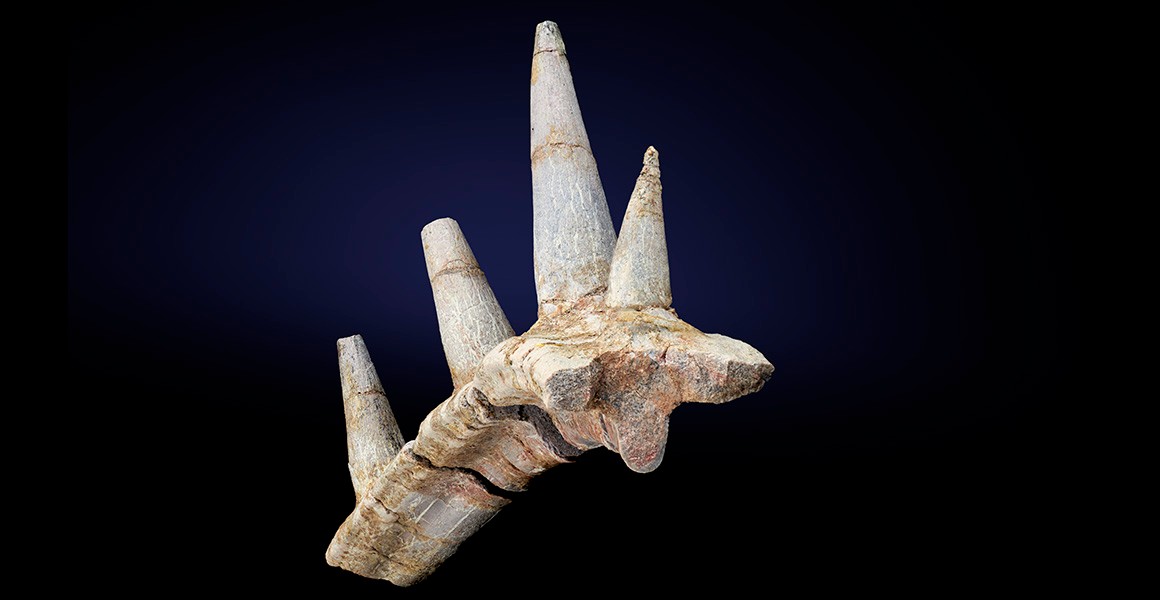 No known animals have ribs with spikes on them like this, so it was at first thought to be a fake. However, the team studied its histology–took thin cross-sections of the bone and looked at them under a microscope–and the microstructure looks like the real deal. Furthermore, the histology is diagnostic of basal ankylosaurs, which the rib’s morphology agrees with. So, this rib was declared the holotype of a new genus, and species, Spicomellus afer, meaning “African spiky dog collar”. Which is exactly what it is.

Between the preserved rib and the outside of the animal, there would have been skin surrounding the spikes, and probably keratin sheaths over them, like a cow’s horns. However, ribs usually need to be more mobile than the top of an animal’s skull–they bend and move when you breathe, eat, twist, lay down, and otherwise move around–and these integral spikes would have hindered such movements. Spicomellus may have looked outwardly like a porcupine dinosaur, but may have been biomechanically more similar to a turtle!

Spicomellus represents not only the first ankylosaur known from Africa, but possibly the oldest ankylosaur discovered so far, existing around the same time or a tad earlier than other basal, fragmentarily known ankylosaurs such as the English Sarcolestes and the Chinese Tianchiasaurus. It’s not a surprise to find them in Gondwana (the southern half of what was previously Pangaea), since later ankylosaurs are known from the south, such as Antarctopelta and Stegouros, and it would have been difficult for these super-unseaworthy animals to cross the Tethys Ocean to disperse from Laurasia (the northern half of Pangaea). However, it’s unlikely that Spicomellus is a direct ancestor of these later Gondwanan ankylosaurs, but rather an early offshoot.

If you thought Spicomellus was weird, just you wait–the new description of a nearly complete skeleton of a dog-sized ankylosaur with a never-before-seen type of tail weapon dropped at the end of 2021 and rocked the paleontology community. This little guy had an adorably large head and skinny legs for an ankylosaur, and a short tail comprised of five rows of spiky osteoderms, arranged like the traditional Mesoamerican weapon, made of a wooden club edged with obsidian blades, known as a macuahuitl.

Not only was this type of tail unheard of before this discovery, it was also unthought of. But it sort of makes sense–since we see biological analogues to other weapons such as clubs (ankylosaurs, glyptodonts), spiked maces (stegosaurs), whips (diplodocids), battle-axes (terror birds), boxing gloves (mantis shrimp), shields (ceratopsians, turtles, and others), and spears (elephants and others), why not expect a macuahuitl to show up somewhere in the history of life? And for that matter, why not a sword or some even stranger weapon like nunchaku? Anyway, this little ankylosaur was surprising in other ways besides the tail. It had hip bones similar to those of stegosaurs, causing the entry qualifications (autapomorphies) for that group to need to be redefined, and showing that the group of Gondwanan ankylosaurs Stegouros belonged to split off from other ankylosaurs quite early in their evolution. It also helped to make sense of older finds of fragmentary Gondwanan ankylosaur material–features of the tail vertebrae and osteoderms of Antarctopelta look a lot like it could have had a macuahuitl as well, and while Kunberrasaurus’s tail is unknown, its anatomy is understood well enough to place it in this group too. The new clade of small, blade-tailed ankylosaurs was dubbed Parankylosauria, and was placed as the sister group to Euankylosauria, or all other ankylosaurs. 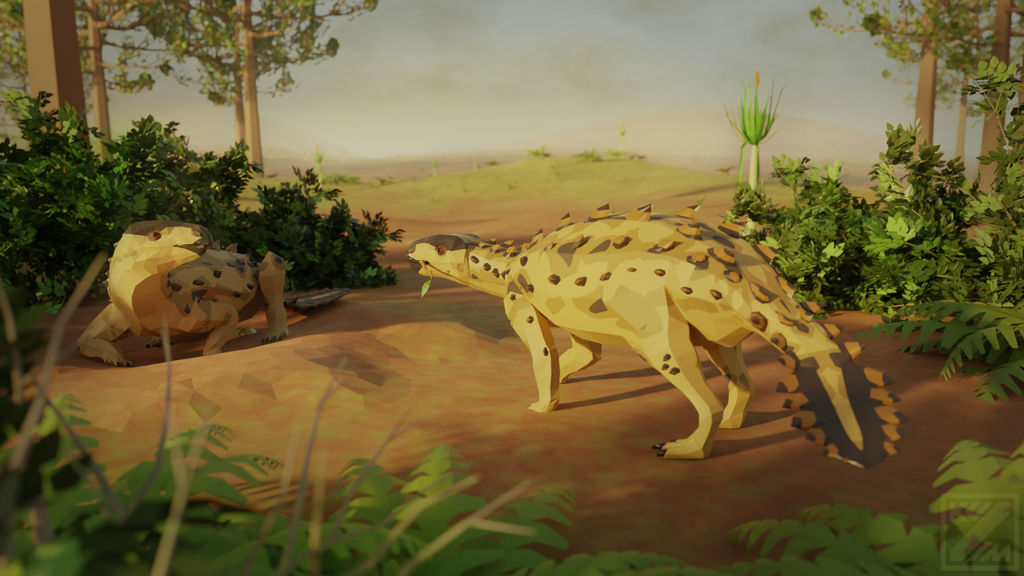 New, revolutionary dinosaurs are being discovered all the time! What will 2022 bring to paleontology? What a time to be alive.