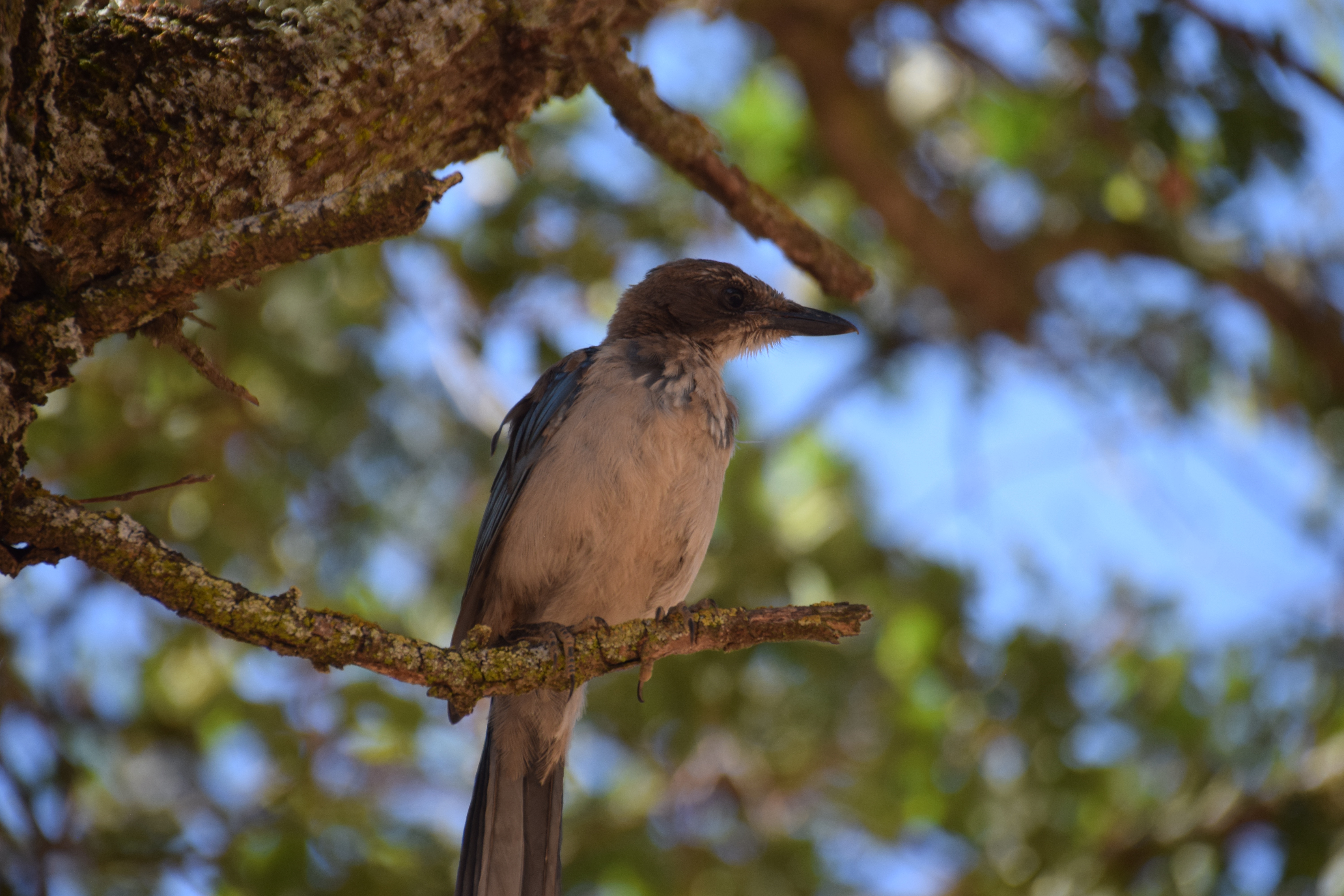 I recently obtained a Nikon D3300 camera, and though I know next to nothing about photography at the moment, I’m super excited to learn and take some killer bird photos! Here are a few of the highlights I’ve taken so far. 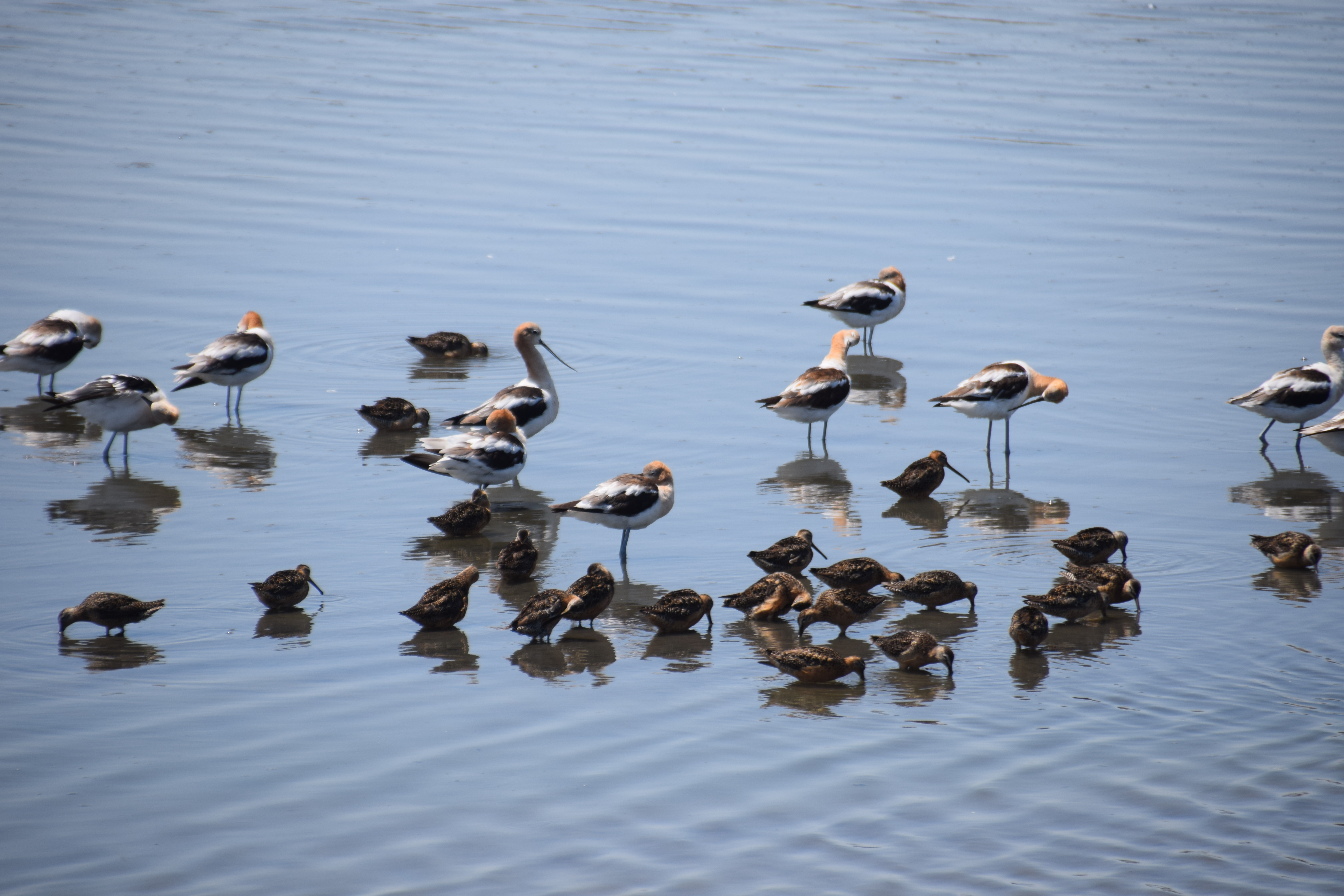 Here’s a large mixed flock of American avocets (the larger, red-headed ones) and short-billed dowitchers (the small, dark ones). Short- and long-billed dowitchers are really hard to tell apart, so I may be wrong. Contrary to what you might reasonably assume, they both have very long bills. Both the dowitchers and avocets are probing the mud in search of brine shrimp and other digging invertebrates.

To make up a convincing fake bird name, just follow this formula: adjective, body part, silly word. Sharp-winged gobtacker. Yellow-footed hannig. Rough-breasted bittle. No one will be the wiser! 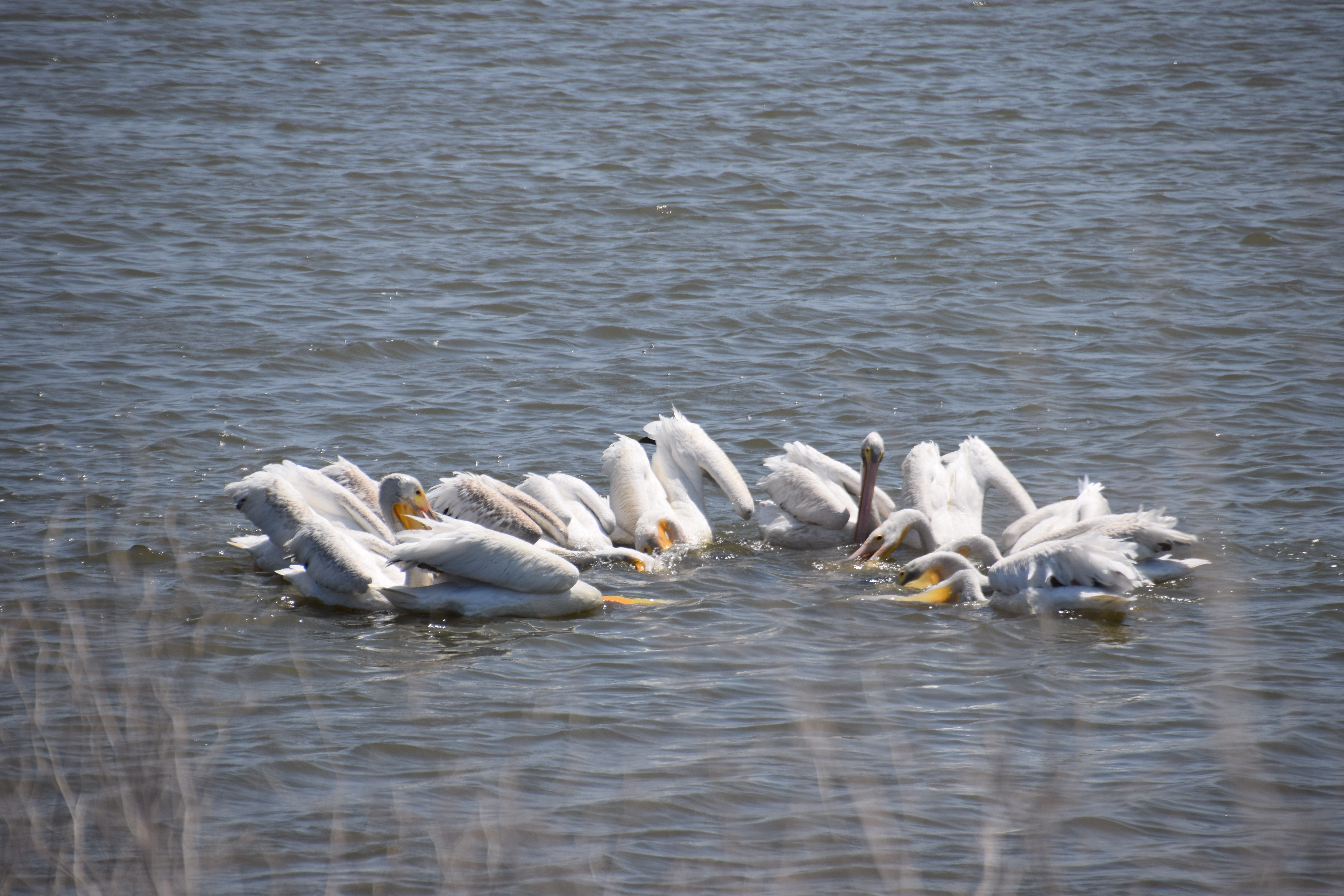 These American white pelicans are fishing cooperatively, forming a circle to corral a school of fish and then diving together. Each bird eats around 4 pounds of fish per day! 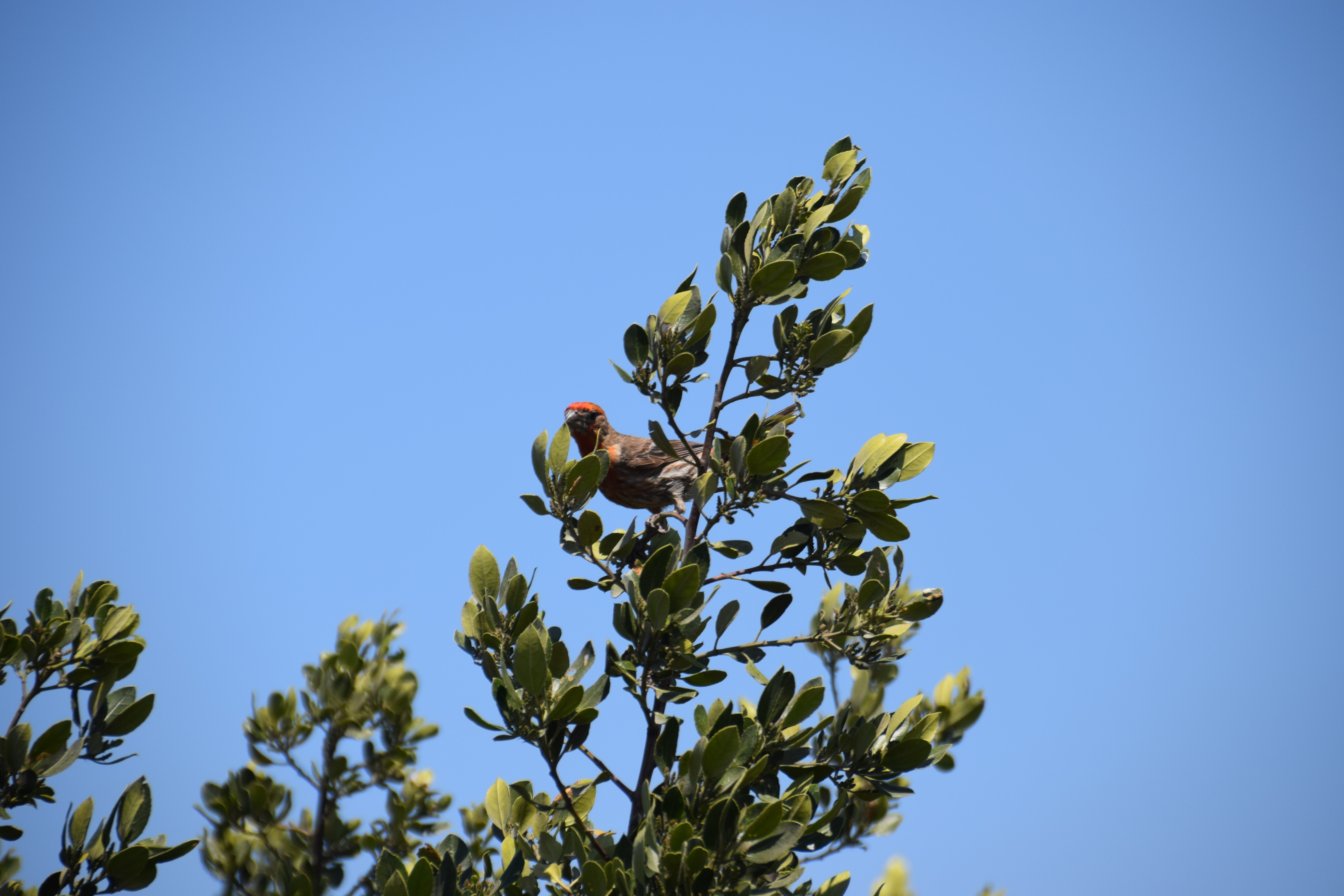 Here is a male house finch showing off his lovely red head and shoulders. The color is derived from fruits in their diet, so it can range from yellow to orange to red. 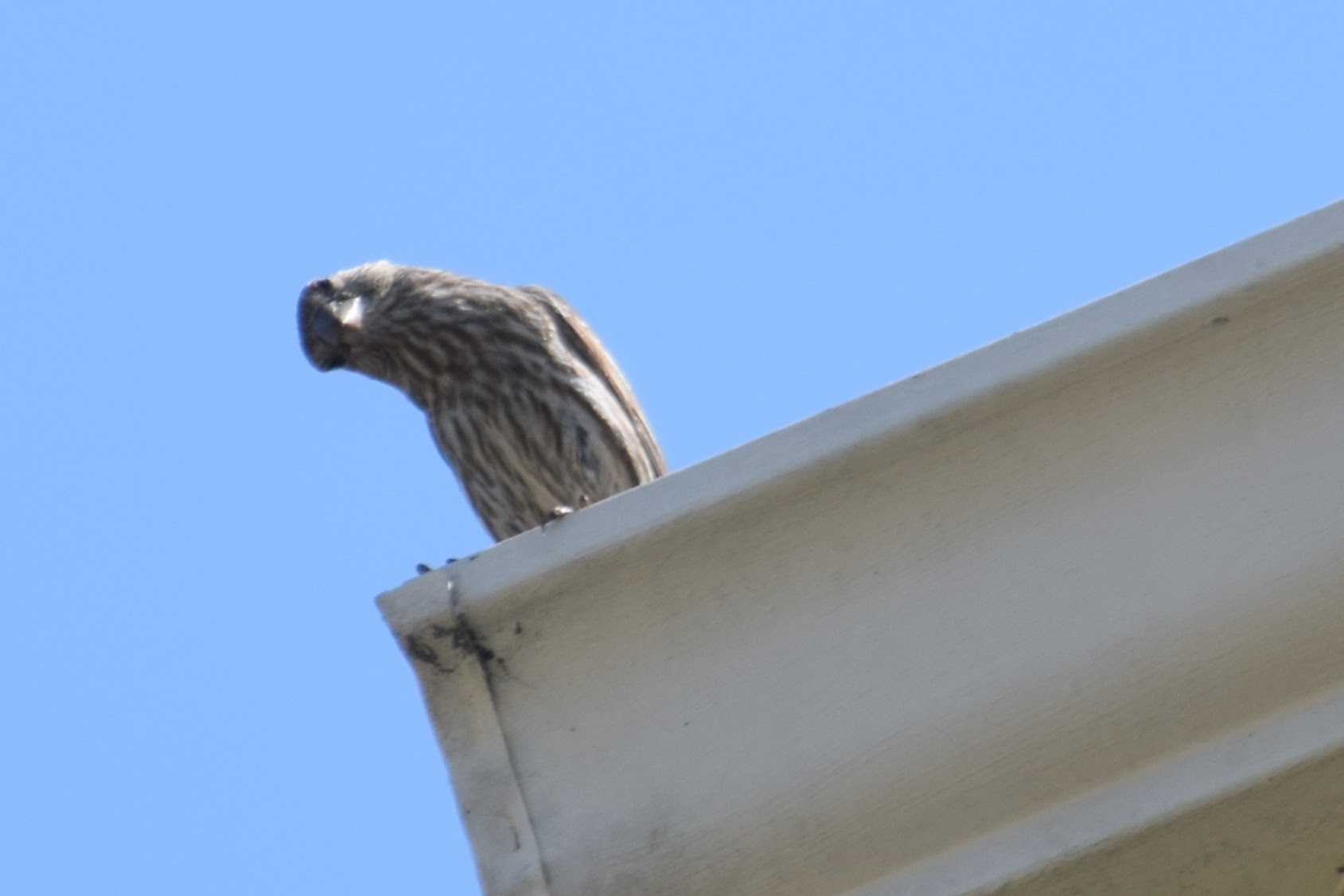 This savannah sparrow was really cooperative in letting me get close. The pose reminds me a lot of my portrait of a curious Microraptor! 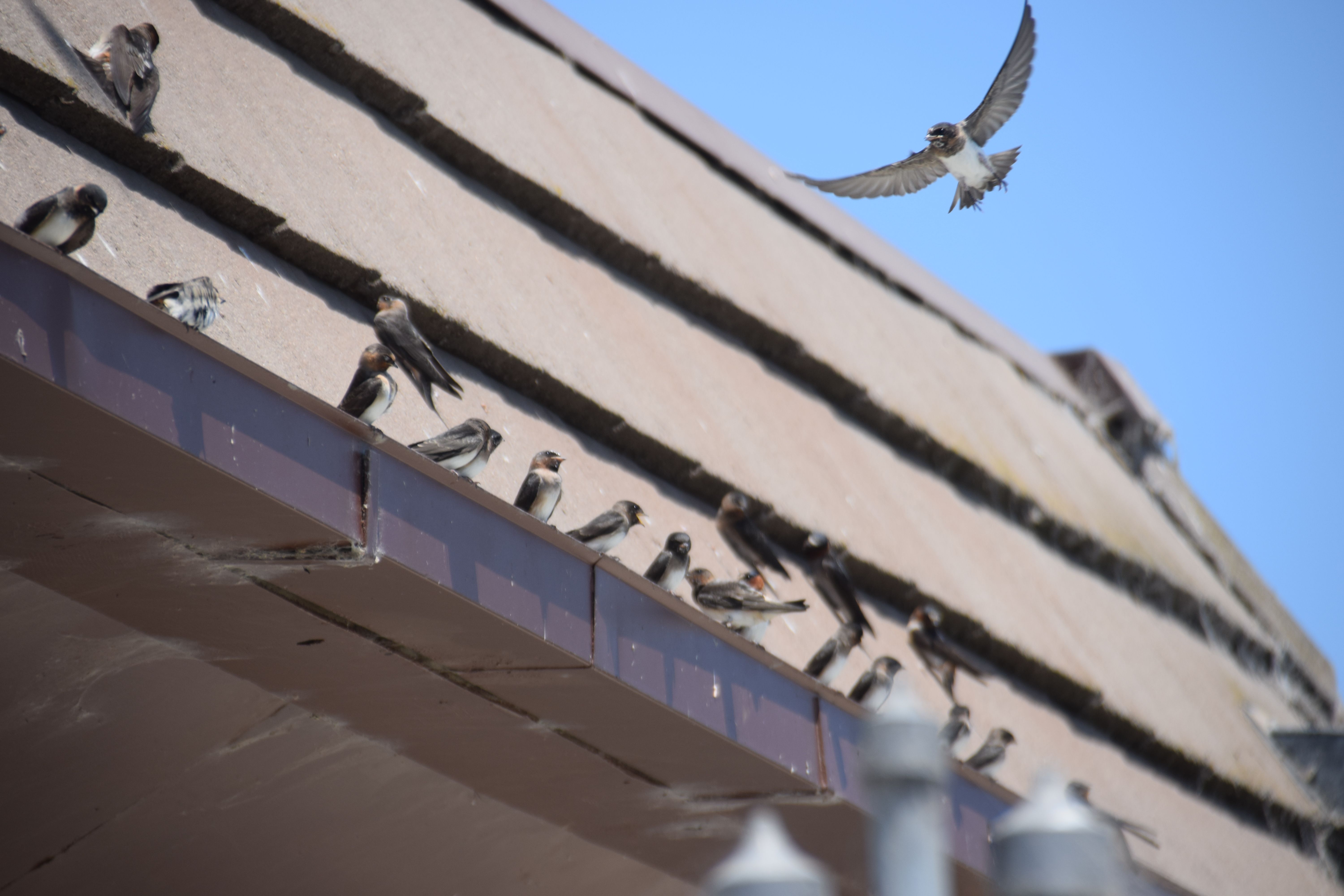 Here are some American cliff swallows that were resting on the roof of a maintenance shack. Whenever I’d seen them before, I could never get a picture because they were always in motion, catching insects on the wing over fields and marshes. If you’ve ever driven down highway 5 in California, you might have noticed certain underpasses have conglomerations of gross-looking mud nests with birds going in and out–those are these guys too. Swallows are remarkably boat-shaped when their wings are folded.

This photo of a turkey vulture at a horse trough is also the first time I’ve been able to get one to sit still–usually they’re soaring. I think he was reluctant to leave the water source, so he let us get rather close before taking off. I wonder if their heads are susceptible to sunburn? 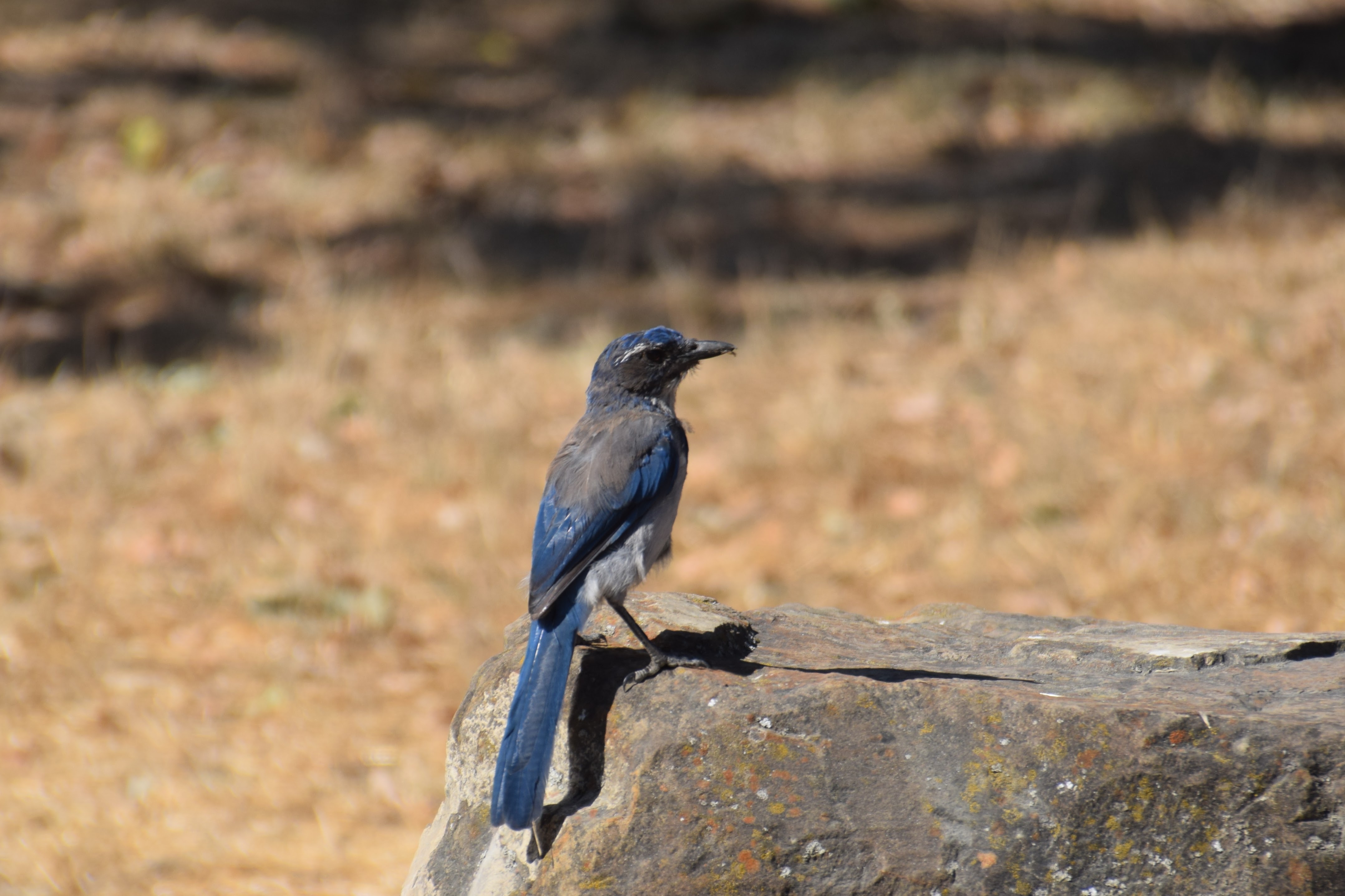 There were tons of California scrub jays around when I went hiking in Pleasanton. They’re one of two birds that Californians often refer to as “blue jays,” the other being Steller’s jay. Jays are close relatives of crows, and are similarly highly intelligent. Scrub jays frequently cache food in a variety of widespread places, and are able to remember over 200 locations, what item was hidden there, and how close it is to going bad. They also make sure to check if other jays are watching when they store something, and sometimes return later to find a new hiding spot if they suspect the original spot was compromised. That suggests that these birds have a theory of mind–that is, they can model the minds of other birds who may have different information than themselves.

Corvids (members of the crow family) have one of the highest brain to body mass ratios of any non-human animal, similar to that of chimps and dolphins. Bird brains, having evolved higher intelligence independently of mammals, are built pretty differently (instead of having a neocortex, which mammals use for most of our higher thought processes, they have a nidopallium, a similar but different brain region), so maybe brain to body mass ratio between mammals and reptiles is not an apples-to-apples comparison. Although raw neuron count is also a blunt tool for assessing cognitive abilities, it’s been shown that birds pack twice as many neurons on average into the same brain mass.

If you’ve ever gone hiking in California, you’ve probably heard the distinctive voice of a scrub jay, even if you’ve never seen one: a scratchy, rising “Rawwwk!” often coming from bushes just off the trail.

The page image at the top is a juvenile scrub jay that was perched just above the trail, and let me get right up underneath for a closeup. He looked a bit frazzled.

If you’re interested in learning more about bird intelligence, I’d recommend The Genius of Birds by Jennifer Ackerman. 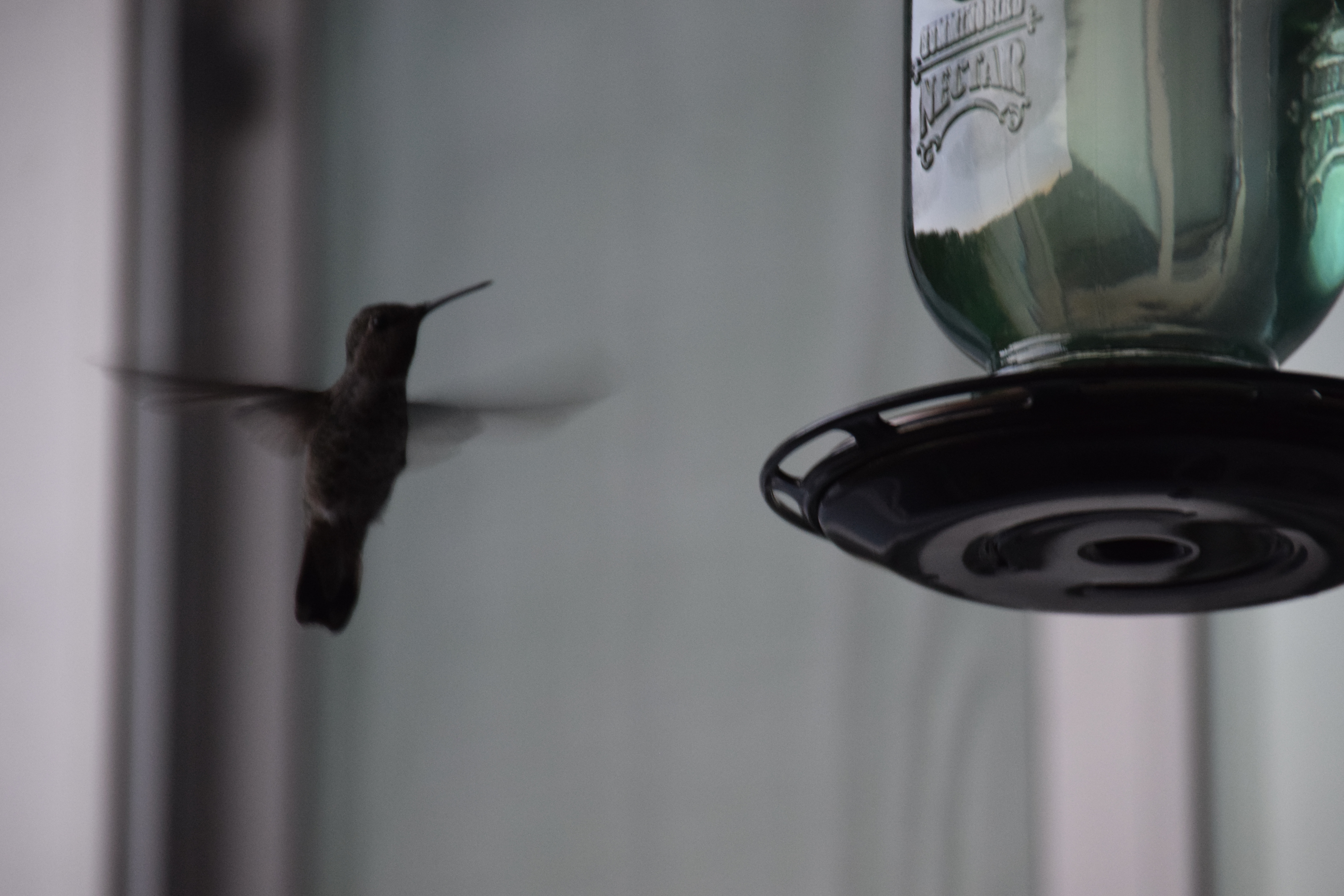 Here’s an Anna’s hummingbird that visits my aunt and uncle’s feeder, named Bub! She has a few preferred perches she rests at while scoping out if it’s safe to go to the feeder at the moment: first she sits on the very top twig of a big tree in the neighbor’s yard, then she flies down to a tomato plant’s wire cage before finally approaching the feeder. I saw her do this little ritual a few times, because every time she approached the feeder, the click of my camera would scare her off. She was tenacious though, and finally sat down to drink when we went in for dinner.

Hummingbirds are the smallest dinosaurs ever to live. Along with the tiger (largest cat ever) and blue whale (largest animal ever), it’s another of the exciting extreme animals we presently share the planet with! 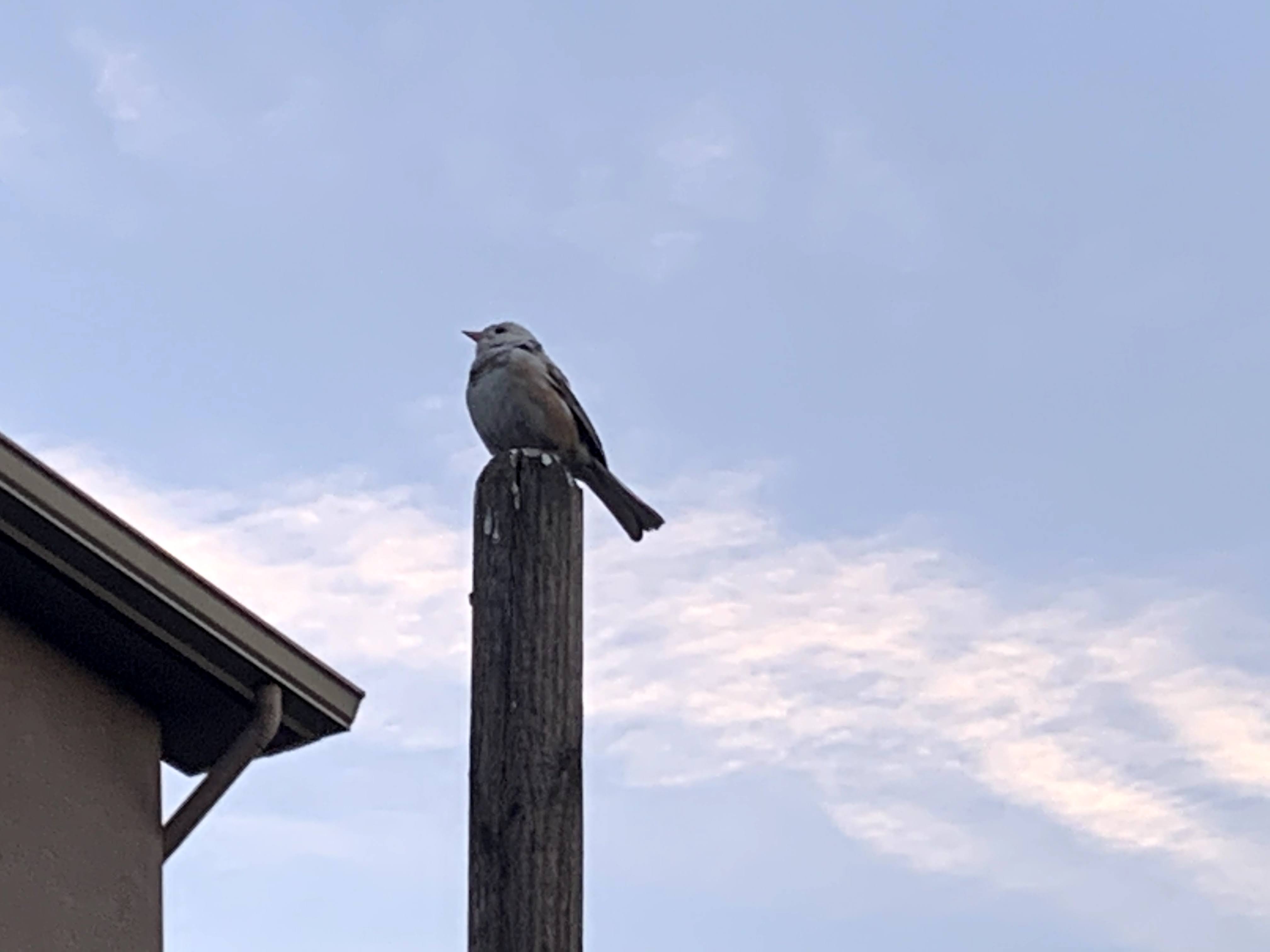 Last but not least, here’s a resident of my very own neighborhood: the leucistic Oregon junco, Bianca! Oregon juncos usually have dark heads and backs, but this one is leucistic–essentially, a partial albino. My first shiny! He/she was making a sound like a car alarm atop this pole. I wonder if the other juncos think he/she is more attractive, or less? Does he/she make up for his/her appearance through loud singing, or is the singing to call attention to his/her beauty?