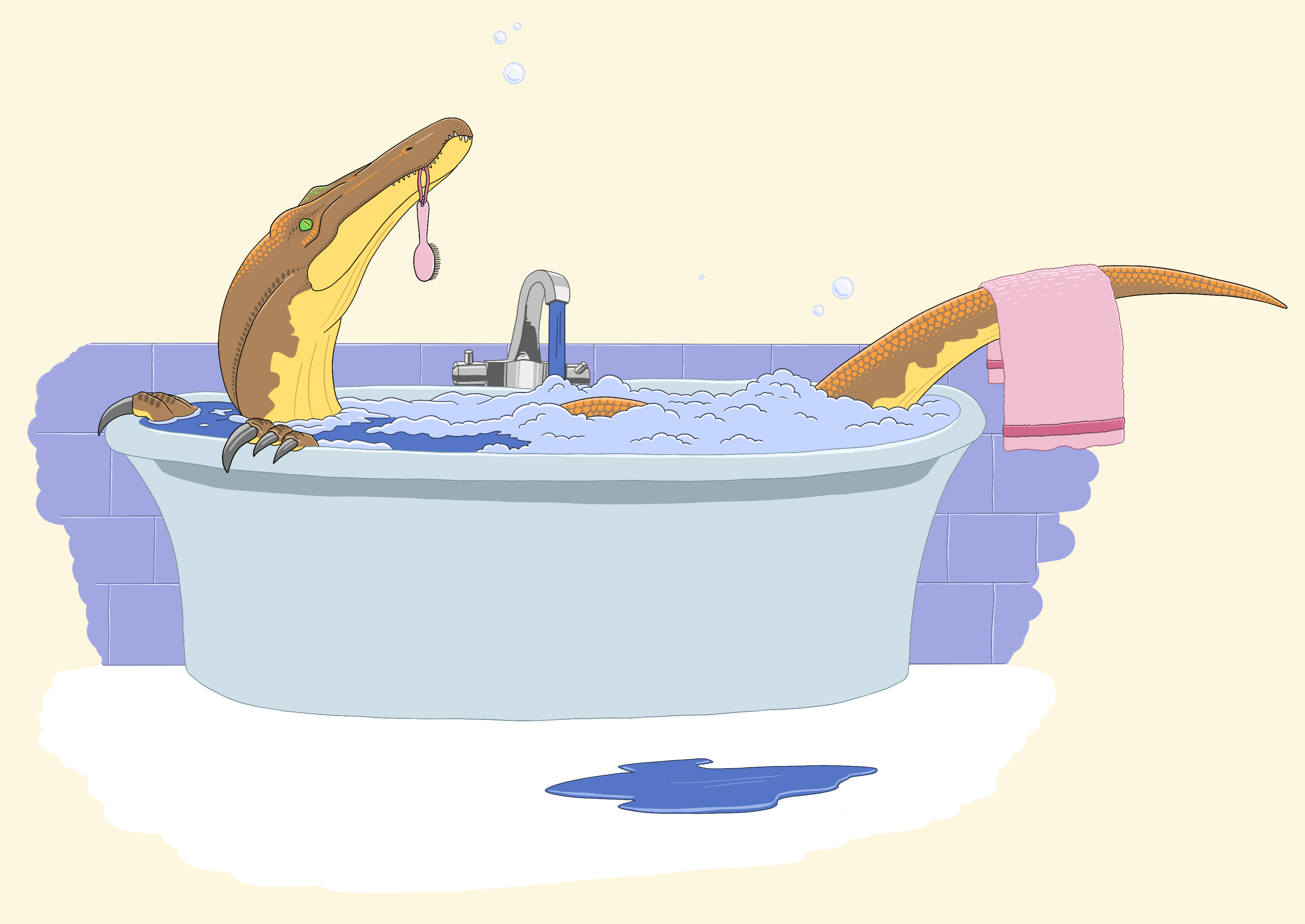 Renowned essayist/computer scientist/venture capitalist Paul Graham has stated that the more technically complex a field is, the simpler the language used in its publications. Conversely, the less technically complex a field is, the more people tend to use overly flowery, purple language to play up their scholarly reputation. Paleontology falls toward the more technical side of the spectrum, but paleo papers are still sometimes guilty of fluffing up the language for no real reason other than to sound smarter. In this post, I’ll give some examples from papers I’ve been reading recently, and translate some of the more egregious language into plain English. The funniest single example I’ve heard is “macromorphological examination,” which means “looking at it with our eyes.” Take note that I’m not trying to criticize these authors–the publications I discuss below represent legitimate science and most of the writing is relatively readable. Often, the more difficult to understand passages just represent attempts to be completely unambiguous by using precise, technical language, or to describe something in words that might be better explained visually. Also note that as an amateur, I haven’t read a vast majority of the paleontological papers that exist; the examples below are just papers I’ve been reading recently. I’m sure there are many more hilarious examples out there I haven’t read yet.

Greater Vulnerability to Warming of Marine Versus Terrestrial Ectotherms

This paper explores whether cold-blooded land animals or sea animals are more likely to be negatively affected by global warming, and at what latitudes. The conclusion is that sea animals at tropical latitudes are the most vulnerable, but land animals depend on shady areas to regulate their temperatures, so if for some reason those aren’t available, land animals would be out of luck. Read the original paper by Malin Pinsky et al here.

“Caution is warranted when interpreting TSMs [thermal safety margins]—in part because the effects of sub-lethal temperatures often drive mortality and population extirpations before thermal safety falls to zero” = Animals wouldn’t actually die of heatstroke; they’d die of other climate-change-related issues, or leave the area, before they overheated to death.

“High frequencies of extirpation (55%) among marine species with low adult mobility suggested that the movement of individuals alone did not explain high rates of extirpation at sea” = We know that sea animals are dying, not just leaving, because immobile animals disappeared from the same places as mobile ones.

This paper takes a look at the arms of the basal ceratopsians, Psittacosaurus, Leptoceratops, and Protoceratops to see how they might’ve been using them. The conclusion is that Protoceratops was probably facultatively quadrupedal (it was usually bipedal but sometimes went down on all fours), Leptoceratops may have been as well except it would’ve walked on the sides of its hands like a karate-chop, and Psittacosaurus was completely bipedal. Read the original paper by Phil Senter here.

“I used manual manipulations of bones and casts to determine the range of motion at available forelimb joints.” = I built life-sized models and moved their arms around with my hands.

“This method involves the assumption that at a given joint, the articular surface of the distal bone will not pass beyond the edge of that of the proximal bone.” = I assumed the bones wouldn’t come out of their sockets.

“The hypothesis of one-handed manual prehension” = Could it grab stuff with one hand?

“Acquire vegetation” = grab plants. This one gets to me, because the author is saying “acquire” when he doesn’t really mean “acquire,” he means “grab”. “Grab” just doesn’t sound smart enough.

Cope’s Rule In the Evolution of Marine Animals

This paper is more mathy than the above two, so one would expect its language to be simpler and less flowery. That’s sort of true–the language is very concise–but that conciseness comes at a cost of skipping steps and going straight to the conclusion. Each sentence could use some unpacking.

What Cope’s Rule (hypothesized by Bone Warrior Edward Drinker Cope) states is that animals seem to have been getting consistently bigger on average over time, but until recently not enough complete data was available to test that hypothesis. This paper concludes that Cope’s Rule is true, at least for sea animals, except during the Mesozoic (Age of Dinosaurs) they stayed the same size.

Note that this paper must have been super labor-intensive to produce! The authors compiled a huge dataset of the body sizes of 17,208 different genera of marine animals, drawing from a variety of different sources and manually measuring each one. I wonder how many undergrads they had slaving away with a book full of pictures of tiny shrimp fossils and a ruler… Read the original paper by Noel Heim et al here.

“Most of the size increase reflects differential diversification across classes, indicating that the pattern does not reflect a simple scaling-up of widespread and persistent selection for larger size within populations.” = There are two ways for animals’ average size to increase: animals could be getting larger, or large animals could be getting more numerous. The authors conclude that the second thing is more correct.

“In addition, it [the fact that average size increase is due to large animals getting more numerous rather than animals getting larger] suggests that the widespread bias toward selection for larger size observed in extant populations is unlikely to propagate into large-scale evolutionary trends observed in the fossil record.” = Today, we observe sea animals getting larger over time, but our observations from this deep-time dataset suggest that’s caused by something different.

Specialized Craniofacial Anatomy of a Titanosaurian Embryo from Argentina

This is a brand-new paper describing a new specimen of sauropod (long-necked dinosaur) embryo’s skull unearthed in Argentina. The skull has some unexpected features, including two snout horns sort of like a rhino, and forward-facing (stereoscopic) eyes. I did some art depicting a baby sauropod with these new features–head over to my summer art post to see it. Read the original paper by Martin Kundrát et al here.

“The new specimen…demonstrates that the specialized craniofacial morphology preceded the postnatal transformation of the skull anatomy in adults of related titanosaurians.” = The strange facial features this embryo has would have gone away as it grew up.

“The calcified neurocranial elements provide some morphological clues about their identity and potentially refine estimates of a prenatal stage of the titanosaurian skull.” = We can tell by the shape of the fossilized braincase pieces how close to hatching the embryo was (in this case, 75-80% of the way through development).

“Putative stereoscopy was suggested for Bajadasaurus, a sauropod from Patagonia; however, it was assumed based on a rather dorsal than anterior placement of orbits. The stereoscopy with “dorsally” projecting orbits became functional (e.g., in predator detection) either when the head was held with the snout facing ventrally on an erected neck or when the animal was grazing and the eyes faced anteriorly.” = Bajadasaurus (the sauropod with two nasty-looking rows of forward-raked neck horns) is said to have had depth perception, but its eyes were facing up rather than forward. This would have only been useful when looking down or when grazing.

“We do not know the exact in ovo position of the head of MCF-PVPH-874; however, given the curled position of extant reptiles of comparable ossification stage and dorsally projected egg tooth, it might be difficult to explain how the rostral process facilitated breaking the eggshell during hatching in titanosaurians.” = We don’t know this embryo’s posture while in the egg, but if it’s anything like crocodylians and birds, the upward-facing snout horn could have functioned like an egg tooth. But the forward-facing snout horn wouldn’t have been useful in breaking an eggshell, so we still don’t know what that one was for.

I think it’s unfortunate that there’s such a high barrier to entry that keeps folks from being able to read scientific papers, both due to jargon and due to complex concepts that it’s assumed the audience is already familiar with. Sci-news articles and press releases mitigate that problem somewhat, but since they’re a layer removed from the original content, you just can’t do the same level of research using only those as sources. Furthermore, some papers just don’t have any “translations” available. So, if any scientific authors are reading this–avoid sesquipedalian loquaciousness and purple prose! Write like you talk! Science should be accessible to all!