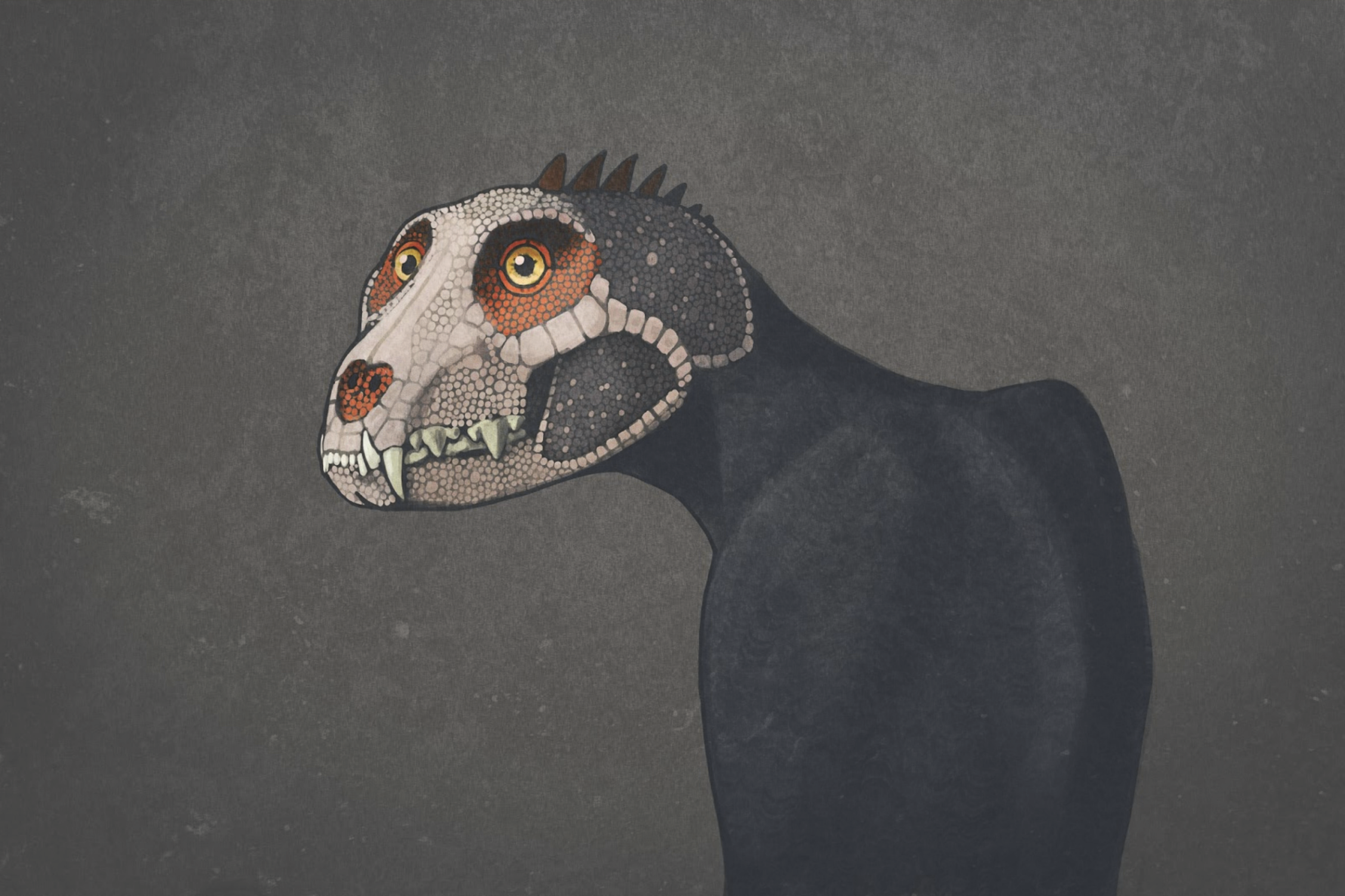 If you’ve spent time looking for paleoart on the Internet, you’ll probably have heard the name “All Yesterdays” and “The ‘All Yesterdays’ Movement” thrown around a lot. What this refers to is a little paperback by paleontologist Darren Naish (of Tetrapod Zoology fame) and paleoartists John Conway and C.M. Kosemen, published in 2012. It encourages paleoartists to think more creatively and to do their own research when depicting ancient creatures, and to avoid paleoart memes. You can read more about the methods and process of paleoart in my other post.

In addition to creative, speculative, but still scientifically rigorous depictions of prehistoric animals, the book ends with a section called “All Todays,” which features depictions of modern animals as distant-future paleontologists might reconstruct them, given just skeletal remains. The results are hilarious and nigh-unrecognizable. However, the captions provided in the book don’t fully explain the erroneous biological decisions, and why a far-future paleoartist might think that the animal looked that way. So in this post, I’ll go through some of the drawings that are available online and explain what paleoart trends are lampooned in each one. I’d still recommend you get the book for the full-size, real-life “All Todays” illustrations (the ones available online are pretty low-res), as well as for the beautiful speculative paleoart section. 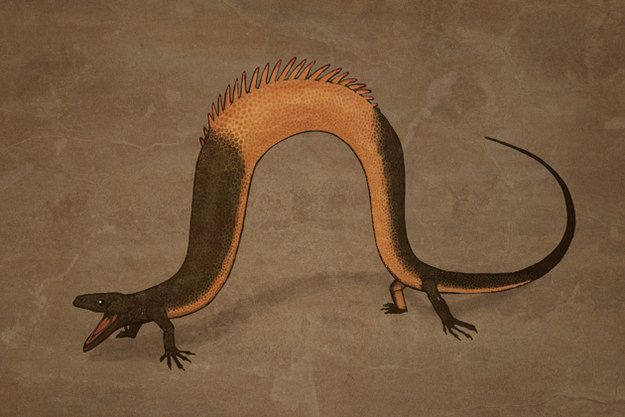 Fossils are often incomplete, and an artist has to fill in the gaps using what they know about closely related animals. Snakes and the various kinds of legless lizards have all lost their limbs independently, and are closely related to limbed lizards, so a future paleontologist uncovering the skeleton of a snake might just assume the legs didn’t preserve. 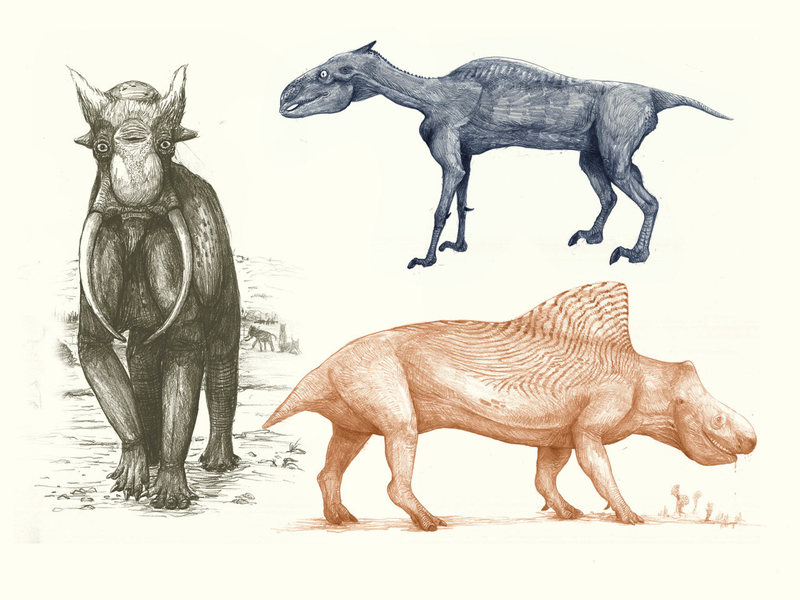 The elephant (left) is lacking its ears and trunk because, being soft tissue, they would be unlikely to fossilize. If no animals with giant ears and prehensile noses are living in the artist’s time, how would they ever dream of such a structure? The zebra (top) is super shrink-wrapped (not enough soft tissue, a common sin among older paleoart) but also appears to have strange clawed toes. This is because often when a fossil skeleton is found, the bones aren’t articulated, meaning they’re not attached to one another, which makes it hard to reconstruct how they fit together and how they would’ve been capable of moving or bearing weight. A zebra is unusual among animals for walking on the tip of one finger on each foot; if you didn’t know such a habit was possible, it’s not a bad assumption to guess that it walked on its foot pad and just had one weird toe sticking out front. The rhino (bottom) has a big sail on its back and no horn because–well, just check out what a rhino skeleton looks like: 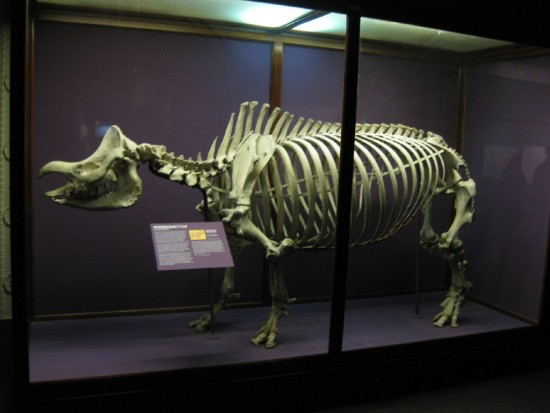 Those tall vertebrae are called neural spines, and many animals in the fossil record had similar structures, such as Permian edaphosaurs and pelycosaurs (early mammal relatives), dinosaurs including Spinosaurus, Acrocanthosaurus, Ouranosaurus, and Deinocheirus, and croc relatives like Lotosaurus and Arizonasaurus. Frequently, paleoartists depict such structures as a sail–essentially, just the neural spines attached to one another by skin–but in rhinos at least, they are covered by lots of musculature and fat, obscuring the shape of the bones. Horns and antlers are made of keratin, not bone, and thus don’t fossilize as often. Some animals’ horns have a bone core and a keratin sheath, such as cows, so their horns would preserve just as well as the rest of their skeletons. But a rhino’s horn is pure keratin, so the only traces it could be expected to leave on a fossil would be osteological correlates, or textures on the bone. If an artist doesn’t thoroughly research, they could end up with erroneously hornless rhinos. 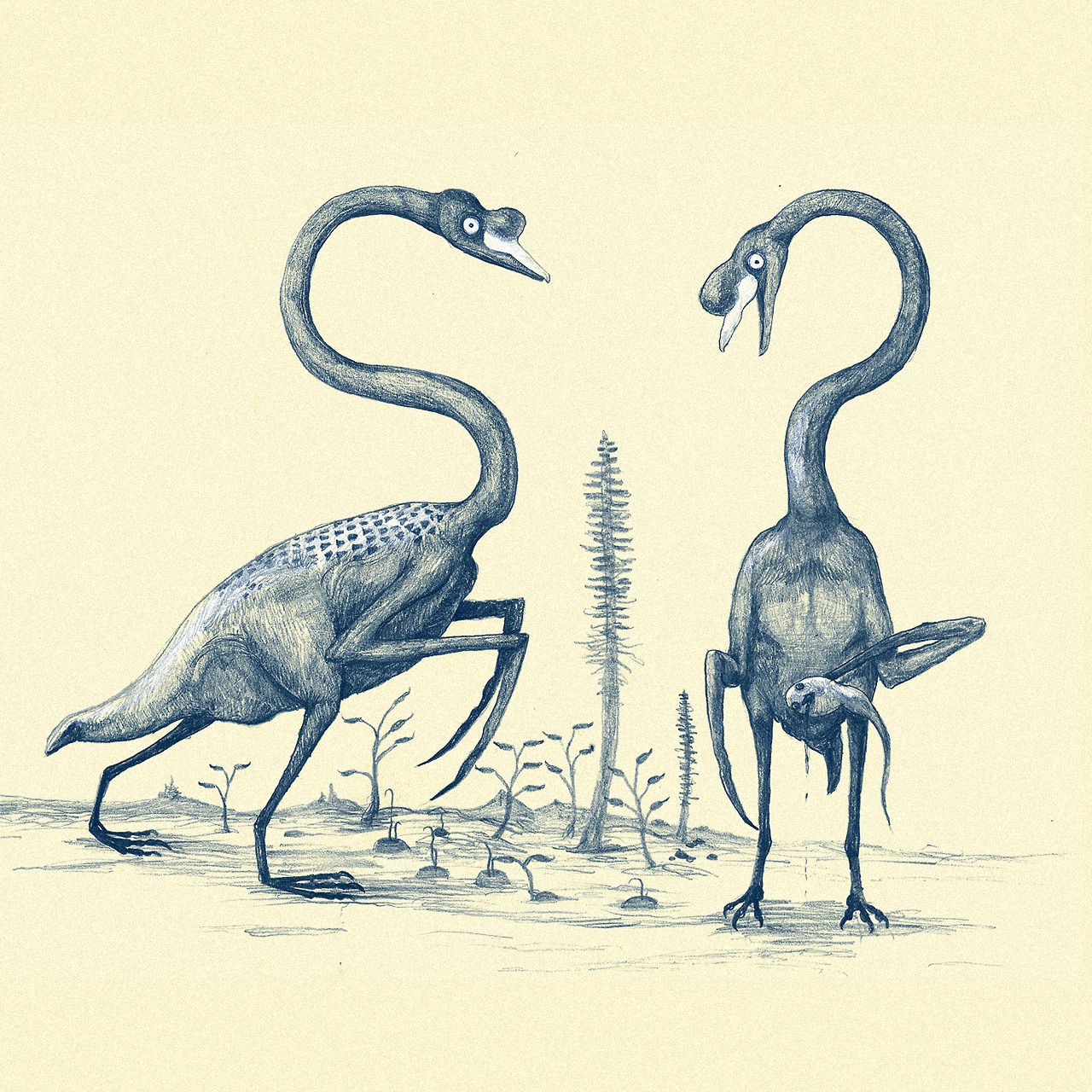 Do you know what a bird’s wing bones look like? They’re pretty pointy: 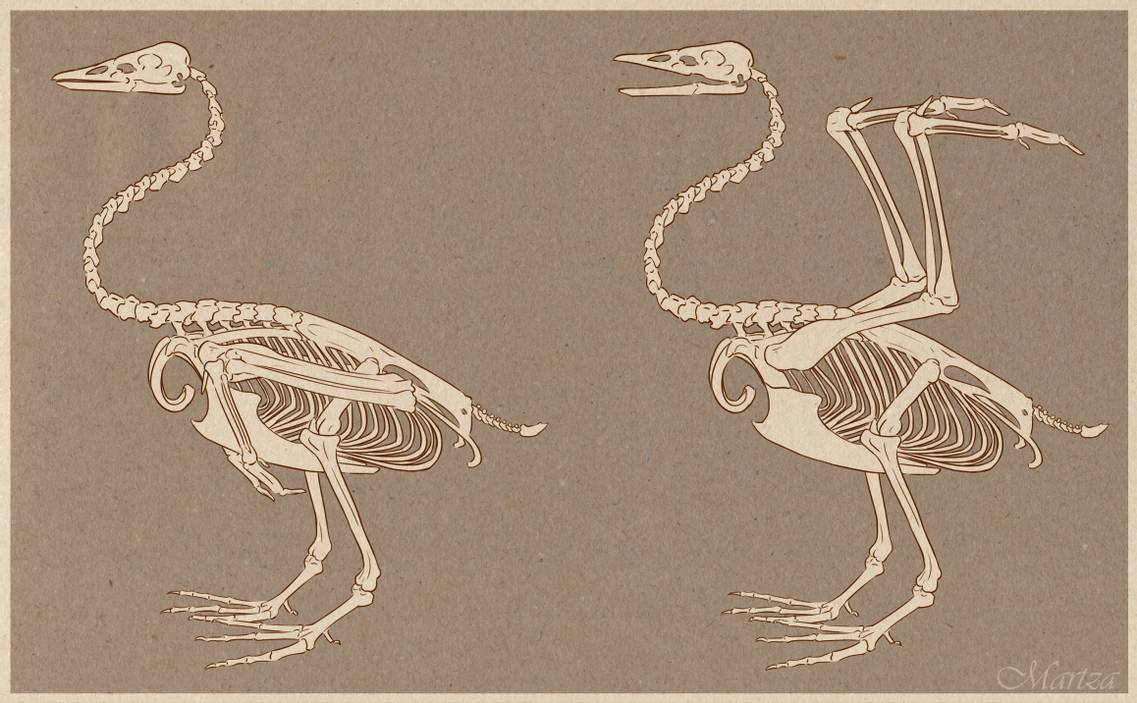 If you didn’t have any living feathered fliers to compare to, and if the swan’s feathers didn’t fossilize, you might be left wondering what those powerful pointy arms were for. Unlike a bat, a flying bird’s arm bones don’t even come close to reaching the edges of the wing’s external shape. Without foreknowledge of feathers, you’d think that this arm would’ve been too short to provide enough lift to allow the animal to fly. Having eliminated that hypothesis, you might suggest the animal used its arms as spears to hunt fish. 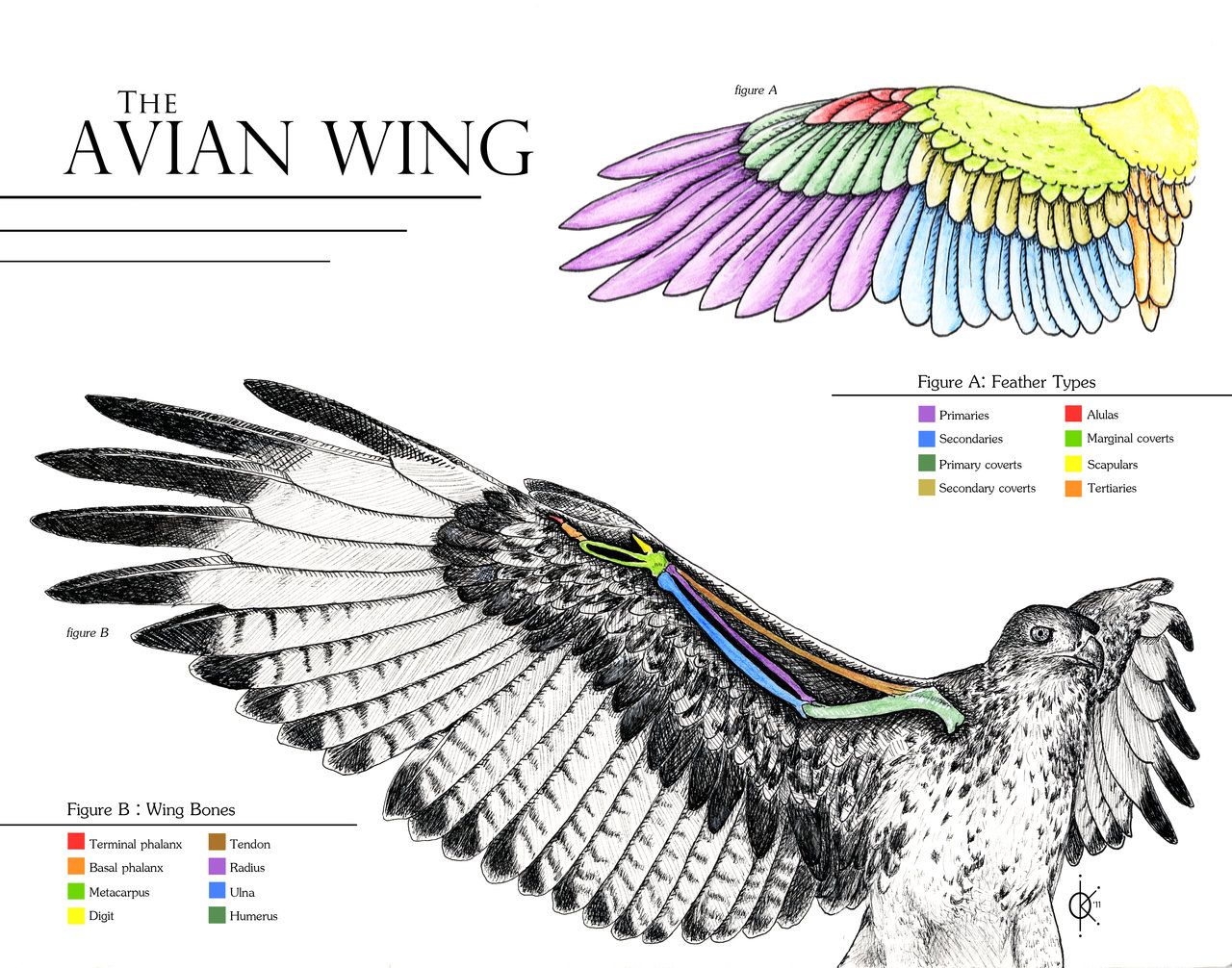 Unlike a bat or pterosaur, a bird’s wing bones form barely half of the length of the flight surface. 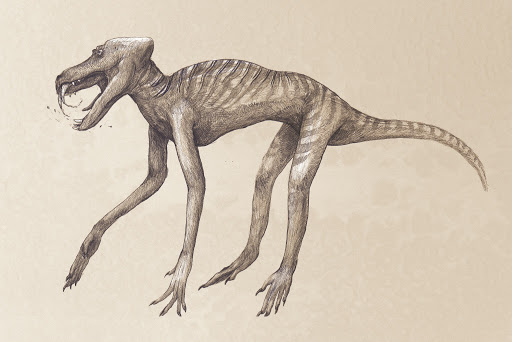 Not only is this baboon very shrink-wrapped, earless, and hairless, it’s also venomous! Baboons’ impressive canine teeth have strange grooves in them that look a lot like they could be used to inject venom. Even having access to living baboons, we aren’t sure what those grooves are for, if anything. They’re not unheard of in other living non-venomous animals though, so perhaps this interpretation is a little bit of a stretch.

Another paleoart meme worth mentioning here is the tendency to depict an entire animal in an isometric or lateral view, so that the anatomy is easily digested by the viewer. Artists’ aversion to giving a subject excess fat and hair also sort of stems from this idea–that obscuring the skeleton makes it harder for the viewer to figure out how the whole animal was put together. However, animals in real life often do have shape-obscuring integument, postures, and habitats, and showing them without those is probably unrealistic.

There is a follow-up book to All Yesterdays, called All Your Yesterdays, that contains fan-made art selected by the original authors and published in free e-book form, which you can find here. It’s much longer than the original, and contains tons of beautiful artwork covering all kinds of extinct animals portrayed in inspiring, creative ways. However, since All Yesterdays stuck mostly to depicting well-known dinosaurs in new ways, All Your Yesterdays ventures out into territory known from much less fossil material, and since it was published in 2013, some of the interpretations are a tad dated. Maybe I’ll do a post in the future explaining some selections from that.

For more thoughts on how paleoart can be less autocannibalistic and more creative, realistic, and even aesthetic, I’d recommend Paleostream 1 and 2, by paleoartist Joshua Knüppe. In addition to the commentary, there are hundreds of beautiful illustrations of obscure prehistoric creatures engaging in unusual activities under interesting weather and lighting conditions.

Note: The page image is supposed to be a super shrink-wrapped, scaly cat. It has no lips, or really any flesh at all, to make fun of the old trend of depicting dinosaurs with all their skull holes and teeth showing on the outside. I used it for the page image because it’s pretty colorful and eye-catching, but I’m not discussing it in much detail because the paleoart memes it’s satirizing are somewhat old and less prevalent today.