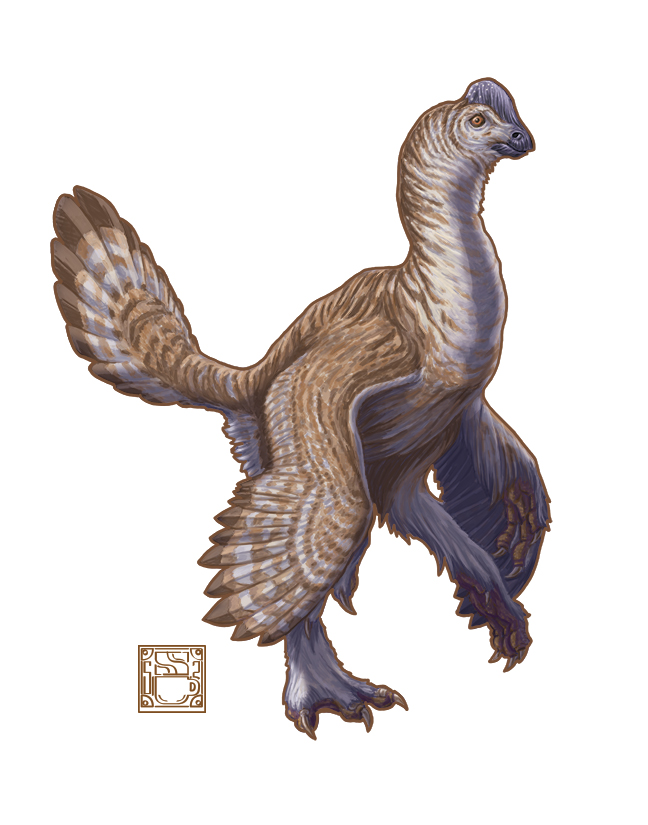 Above: Anzu, the “Chicken from Hell”. 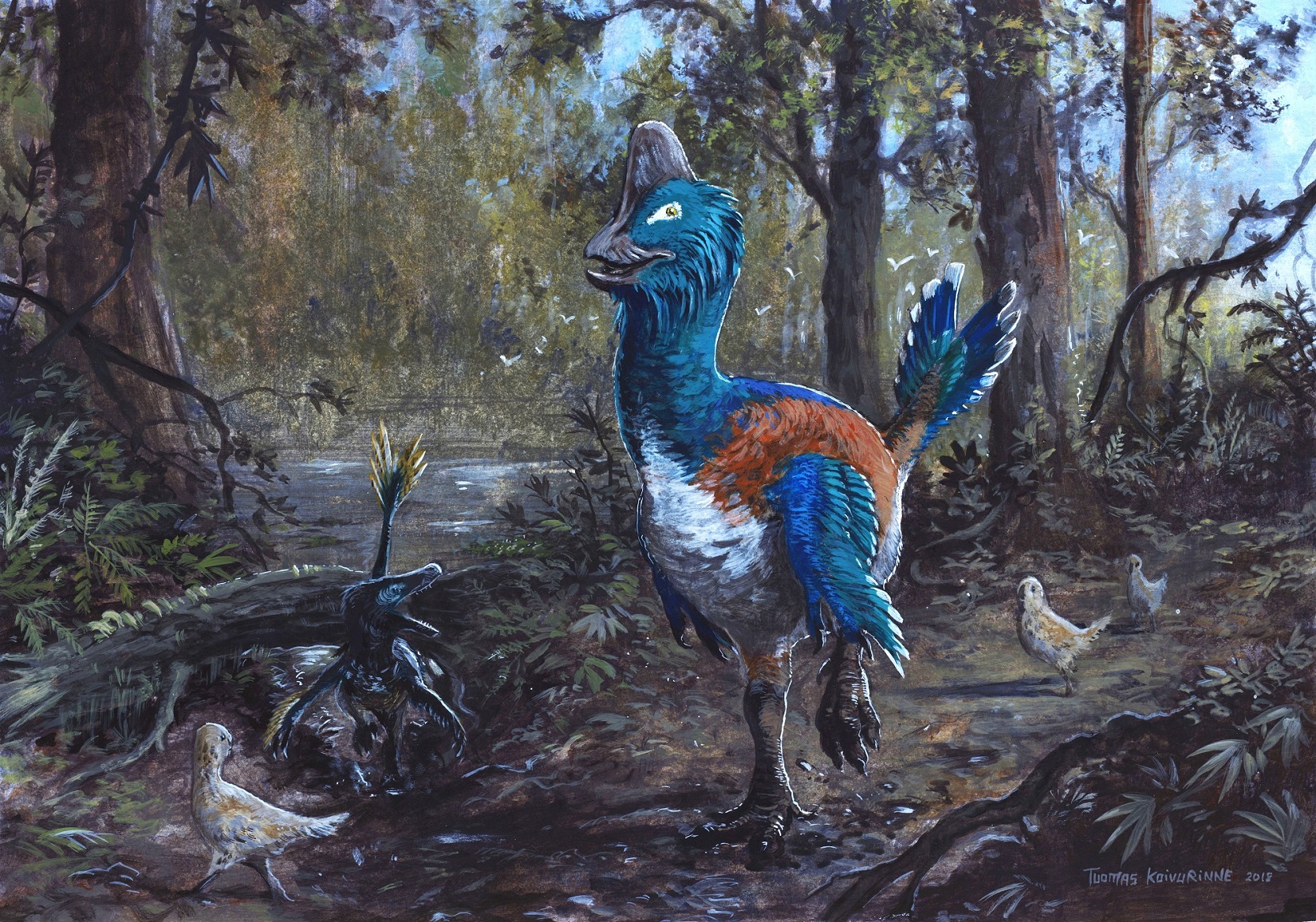 Above: Anzu and chicks are startled by a nasty Acheroraptor. 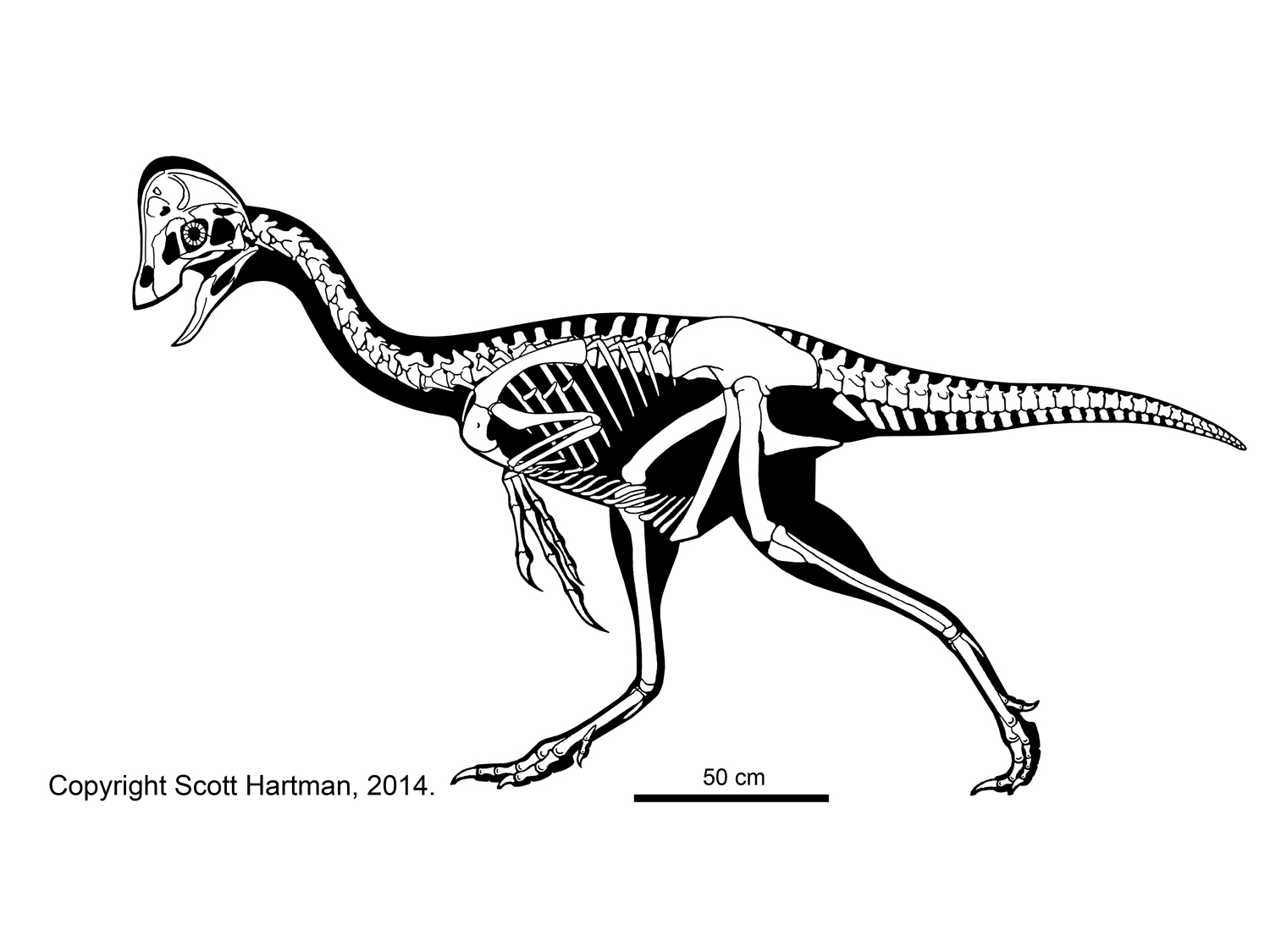 Anzu was a large oviraptorosaur with a toothless beak and an impressive head crest. It was North America’s largest oviraptorosaur (and by far the most well-known to science), and the third-largest in the world (Gigantoraptor, from a bit earlier in Mongolia, is a lot larger, and Beibeilong, though only known from a fetus, would’ve grown comparably huge). Anzu was probably omnivorous and not picky, and was a good runner. The crest was probably used for sexual display, leading some to speculate that Anzu may have exhibited sexual dimorphism, with major visual differences between males and females. Caenagnathidae (pronounced SEEN-a-NATH-id-ay), the family that includes Anzu, means “recently jawless” and is the sister clade to Oviraptoridae (which includes Oviraptor). Weird holes in caenagnathids’ lower jaws, along with their overall very birdlike appearance, initially made scientists think they were extinct ratite birds, like ostriches, before they realized they were actually non-avian dinosaurs.

Anzu was part of the famous Hell Creek biota alongside such fan favorites as Tyrannosaurus, Triceratops, and Pachycephalosaurus. Sixty-six million years ago, it was among the unfortunate direct victims of the Very Bad Day.

Anzu is named after a Sumerian mythological demon whom it somewhat resembles (center, below). 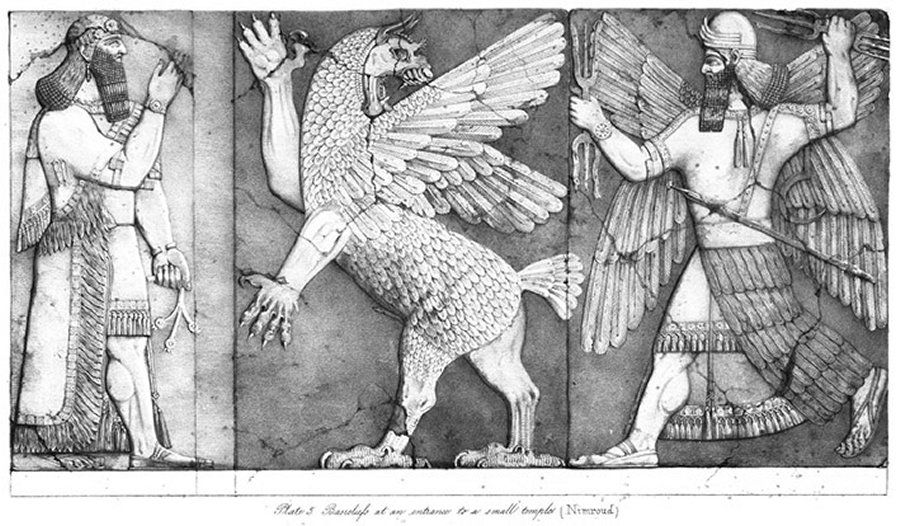 It’s called a sclerotic ring, a special bone that supports the eyeball, which is useful if it’s particularly large or not spherical. It’s common among all groups of vertebrates except modern mammals and crocodiles. Read more about it here (less technical) and here (more technical). 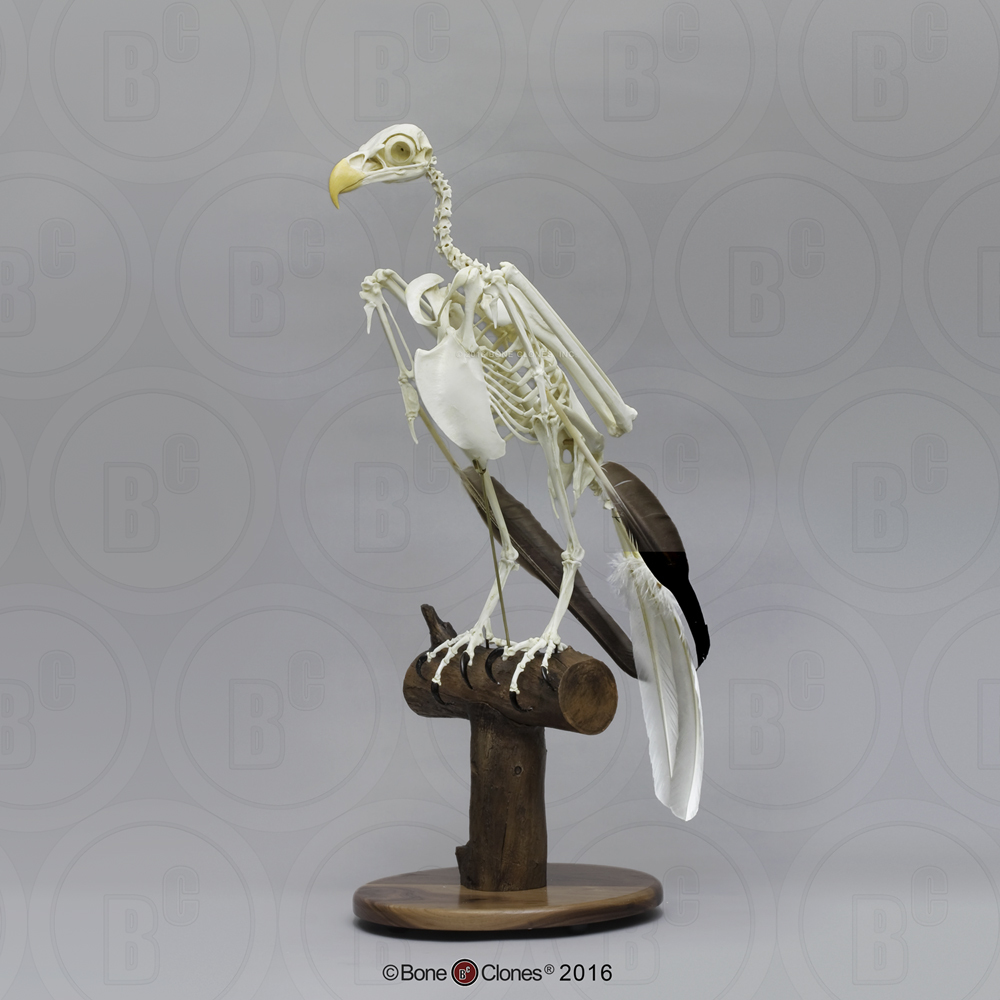 Above: A bald eagle skeleton with sclerotic ring visible. 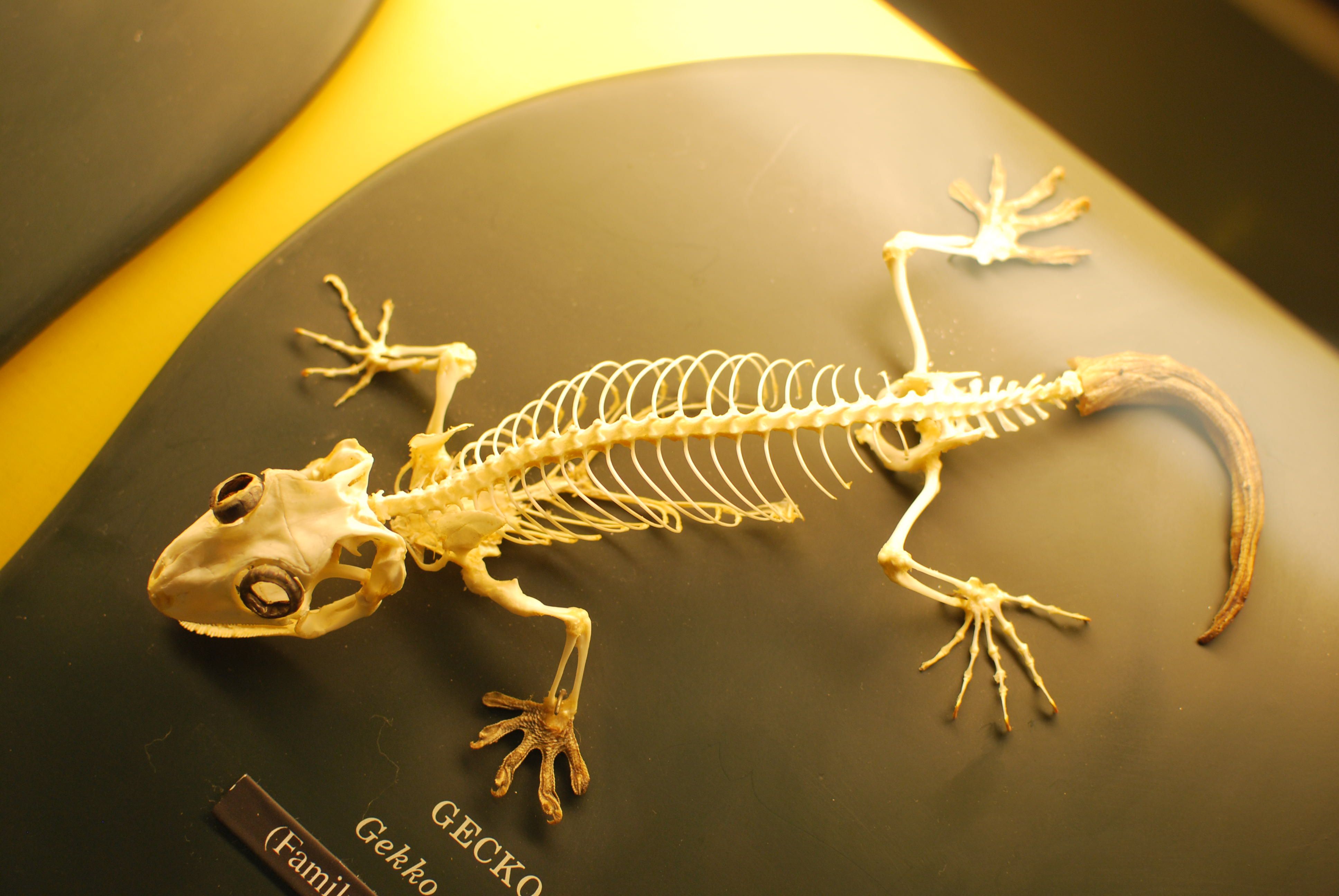 Above: A gecko skeleton with sclerotic rings visible.

Paleontologists often try to infer behavior and appearance based on properties of the sclerotic ring (nocturnal versus diurnal, good or bad eyesight, large visible eye or covered by skin) but so far the results have been somewhat questionable.

Note 2: How many times have beaks evolved independently?

A lot! Birds, oviraptorosaurs like Anzu, cephalopods (octopuses and squids), turtles, pterosaurs, monotremes (platypuses and echidnas), parrotfish, certain ornithischians, dicynodonts (a type of stem-mammal), certain pseudosuchians like Lotosaurus and Effigia (crocodile relatives), rhynchosaurs (early reptiles), therizinosaurs, ornithomimids, and even some ceratosaurs like Limusaurus all had keratinous beaks. And that’s not even a comprehensive list. Beaks are both very useful and very easy to make, evolutionarily–they are a very homoplastic trait. This is another example of convergent evolution. 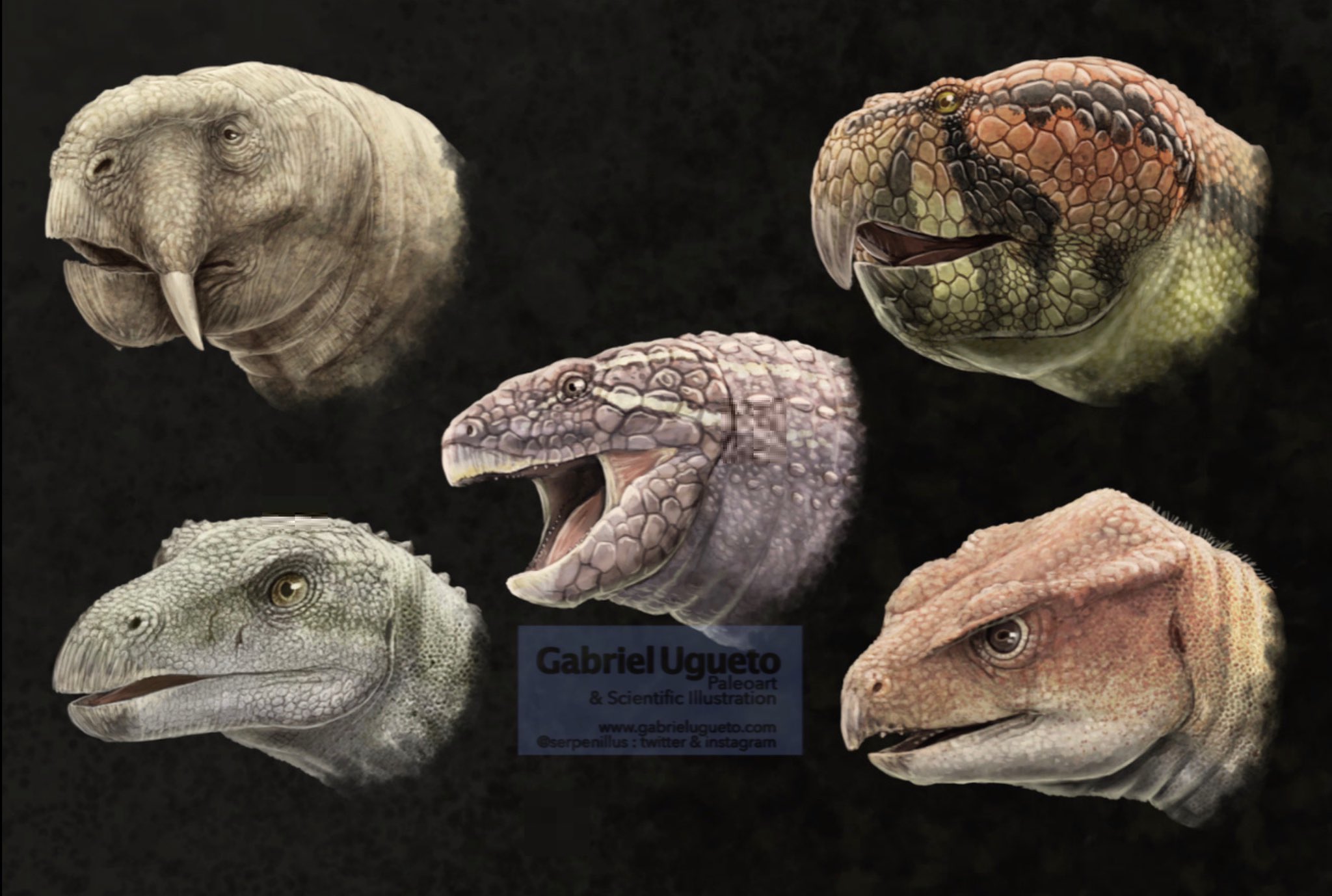 Above: Five of the many times beaks have developed among unrelated groups. Clockwise from top left: a dicynodont (mammal relative), a rhynchosaur (early reptile), a ceratopsian (horned face dinosaur), a shuvosaurid pseudosuchian (croc relative), and a turtle.