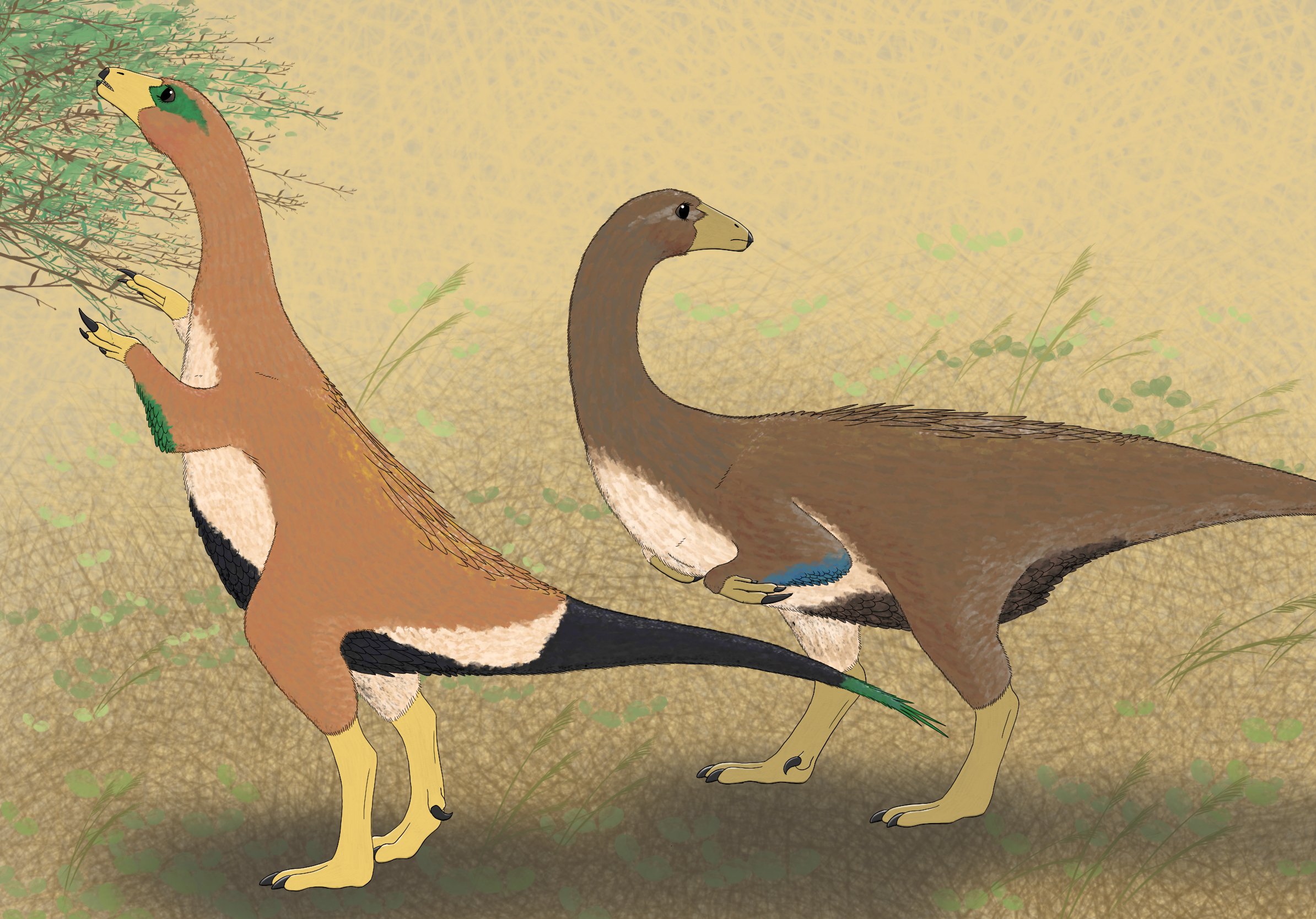 Chilesaurus was a small, bipedal, herbivorous dinosaur from Late Jurassic Chile, known from many well-preserved specimens from juvenile to adult. Its description was published the same week as the famous bat-winged dinosaur, Yi qi, so at the time of its announcement it was largely overlooked. However, Chilesaurus would go on to have much farther-reaching implications than Yi, supporting a complete re-writing of the entire dinosaur family tree.

To the original authors, Novas et al, publishing in 2015, Chilesaurus was clearly very weird. It seemed to have a chimera-like patchwork of features from all over Dinosauria: basal neotheropod-like shoulder blades, basal sauropodomorph-like limbs, ornithischian-like hips, and bird-like hands and wrists. (Thank goodness we found complete, articulated specimens, or else we might have named four or more different dinosaur genera based on the disparate body parts!) It had leaf-shaped teeth for eating soft plants, and possibly a beak on the very tip of its snout for cropping vegetation. At the time of its description, it was recovered as an aberrant basal tetanuran theropod–a strange relative of Spinosaurus and everything more birdlike.

Okay, before we move on, I’m going to introduce a timeline for major events in the history of dinosaur phylogeny:

What does all this discussion of pelvic bones mean? As you can see in the diagram above, saurischians’ pubic bones point forward and down, while ornithischians’ point backward and down. This holds true for all ornithischians and almost all saurischians, which makes it a useful heuristic for dividing the two groups. However, you may have noticed that birds are theropods, which means they’re saurischians: birds are not in the “bird hip” group! Why is it called that, then? Because birds secondarily evolved the same type of backward-pointing pubis, even though they’re descendants of the reptile-hipped meat-eating dinosaurs. Confused yet? It gets better: another group of theropods, the herbivorous therizinosaurs (“rake reptiles”), also secondarily developed a bird-like hip. So while the Ornithischia-Saurischia hip distinction is almost always accurate when identifying non-avian fossil dinosaurs, it’s not as robust as we once thought.

Returning to Chilesaurus–how does it stack up in the hip department? Chilesaurus has a classic ornithischian-type backward-pointing pubis. If it’s a theropod, this would be at least the third instance of this pelvic orientation evolving in this group; if it’s an ornithischian, that would be par for the course. So this, along with a bunch of statistical morphospace analysis that I won’t get into, led to the reclassification of Chilesaurus as a basal ornithischian by Baron in 2017. This has a few implications: that ornithischians evolved from theropods, supporting the Ornithoscelida hypothesis; that Chilesaurus is the end of a ghost lineage stretching back to the Late Triassic and there are lots more dinosaurs in this family waiting to be found; and that in ornithischians, the rear-facing pubis happened first, before the predentary bone appeared (a bone at the front of the snout that is also diagnostic to ornithischians, but which Chilesaurus lacks).

There are a couple other weirdnesses about Chilesaurus aside from its morphology. First of all, it’s endemic to (only known from) Chile, which is unusual for the Late Jurassic, in which most environments were cosmopolitan (the same animals and plants filled the same roles everywhere in the world). Second, Chilesaurus appears to have been very abundant in its environment, probably being the dominant smallish herbivore on the scene. Everywhere else in the world, small ornithopods (relatives of the “duck-bills”) like Camptosaurus, Dryosaurus, and Dysalotosaurus filled this niche. What made Chile different from the rest of the world at that time? We just don’t know. Maybe if we can find out, it will provide clues about where to look for Chilesaurus’s ancestors or relatives.

What else do we know about Chilesaurus? In November of 2017, Chimento et al took a closer look at the postures of four specimens of Chilesaurus, which were all preserved articulated in lifelike positions. They all showed wrists and hands bent at a sharp angle, between 20 and 60 degrees, a range of motion that would have been enabled in life by a birdlike semilunate carpal (half-moon-shaped hand bone that allows birds to fold their wings). The hands were also very derived and birdlike, with only three fingers, the first two being much more robust than the puny third. This is pretty unexpected for a dinosaur whose other body parts are all so primitive. All the skeletons examined in this study did not appear to be resting, but didn’t appear to have been moved around after death, either, indicating that Chilesaurus walked around with its wrists bent at this absurd angle all the time.

Modern birds bend their wrists like this using tendons found in the propatagium, the skin flap that connects their shoulder and wrist, and which is useful for flying. Chilesaurus, which certainly didn’t fly, probably had a propatagium as well, in order to bend its hands like that, indicating that the propatagium probably arose before flight and was exapted (repurposed) for an aerodynamic role later. Add that to the list of qualities dinosaurs had ready to go when they needed to start flying: feathers and hollow bones were also evolved long before flight, and just happened to combine in a fortuitous way. What lucky ducks.

One last note: the skeletal schematic published in the original paper describing Chilesaurus showed a very short-faced animal, hence the pug-faced reconstructions above. However, there’s often a big difference between schematic and realistic skeletals, and later skeletal reconstructions have shown a more normal long-snouted creature, inferring the existence of skull bones that were not preserved. My depiction of Chilesaurus (the page image at the top) combines this interpretation with the propatagium and arm-folding study into what is (I think) a more accurate reconstruction. My Chilesaurus couple are posed similarly to a gerenuk, a type of antelope that eats standing on its hind legs, while the colors are reminiscent of American wigeons (a type of duck).

I hope all this isn’t too arcane–please drop me a line if you have any questions!

3 Chilesaurus by Kaek on Deviantart.

4 Chilesaurus by Stygimolochspinifer on Deviantart.