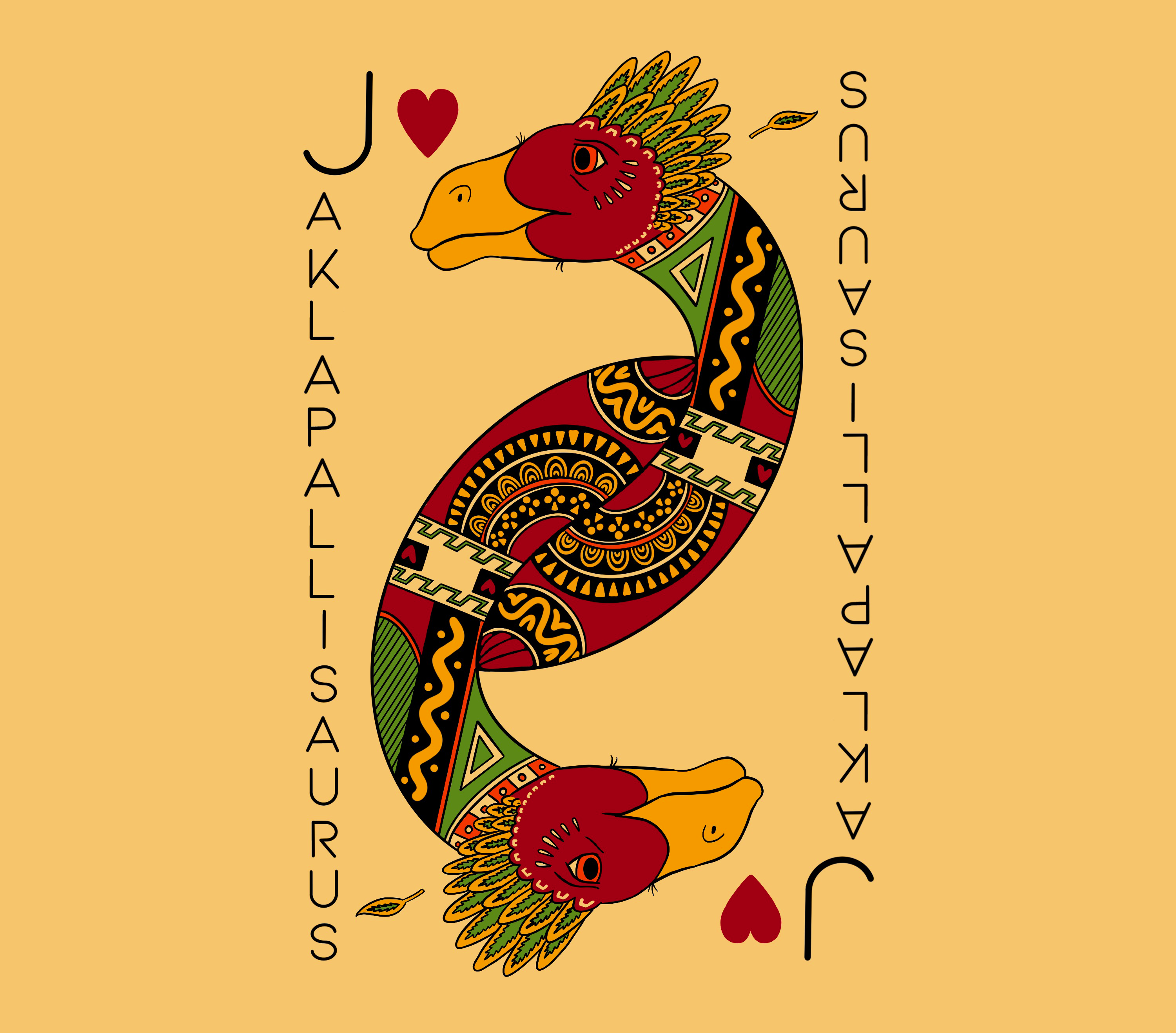 Wake up babe, new dinosaur just dropped. This dog-sized herbivore was just published on the last day of August and is making headlines as Africa’s oldest confirmed dinosaur. It hails from the Carnian, the oldest age in the Late Triassic, which is when dinosaurs were just beginning to diversify. Up until now, basically all dinosaurs from this time period were known from Argentina and Brazil, both because their badlands let fossils weather out of the rock naturally, which allows them to be found easily, and because success engenders more work done in the same area.

This isn’t to say that the Triassic fossil assemblages from South America aren’t valuable; but preliminary results from Zimbabwe mentioned in the Mbiresaurus paper indicate that there’s a huge wealth of information to be gained from African fossils as well, which were up until now neglected. I can’t wait for more animals from the Pebbly Arkose Formation (where Mbiresaurus was found) to be formally described!

Mbiresaurus was a lightly built bipedal herbivore or omnivore, thought to be a basal sauropodomorph (early relative of the later giant long-necked dinosaurs). Its body plan is pretty generic; at this point in time, all dinosaurs looked roughly similar, since they hadn’t had time yet to evolutionarily diverge. 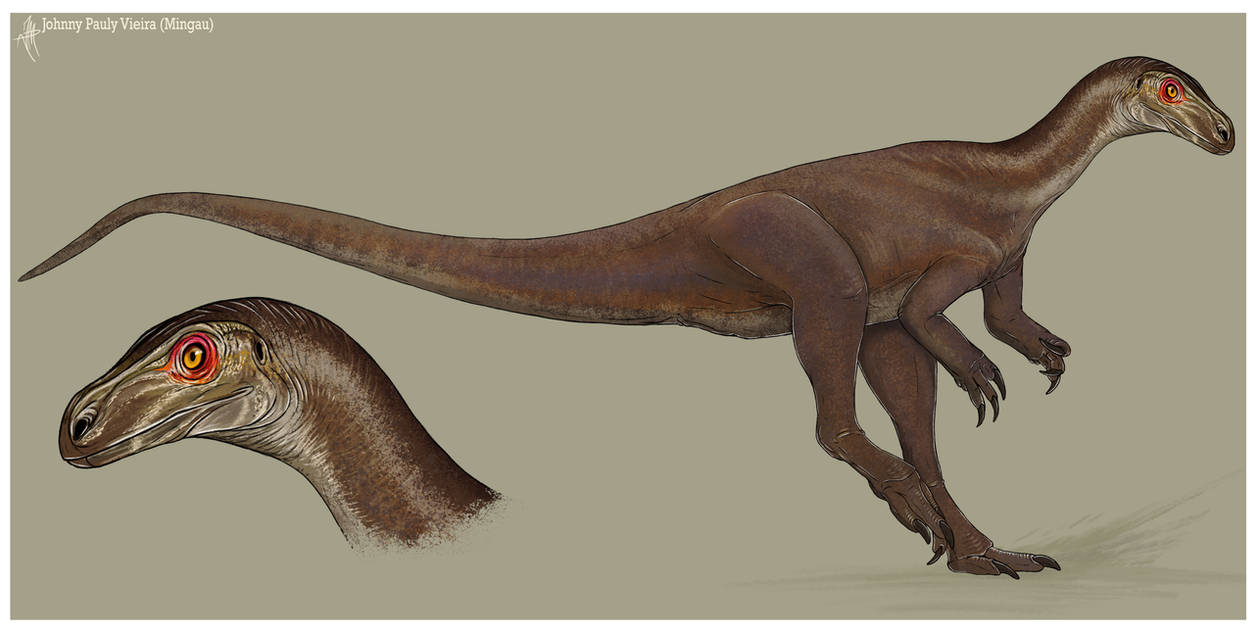 Known from two highly complete skeletons, its anatomy is well understood, and the wealth of material available for study will keep scientists busy for years. What a find! Usually, fossils of this age are fragmentary, and to reconstruct their approximate life appearance, paleoartists piece together known bits of lots of related animals. Here’s a rather extreme example of that:

This is Erythrovenator, a contemporary of Mbiresaurus from Brazil, known only from a tiny piece of leg bone.

The Mbiresaurus specimens were collected alongside lots of other fossils of Triassic animals, including rhynchosaurs (pug-faced herbivorous reptiles), aëtosaurs (armored herbivorous crocs, one of my favorite Triassic groups), cynodonts (early mammal relatives), herrerasaurids (large predatory dinosaurs), and other sauropodomorphs that might be the same as ones already known from South America. (More on those last two groups later.) 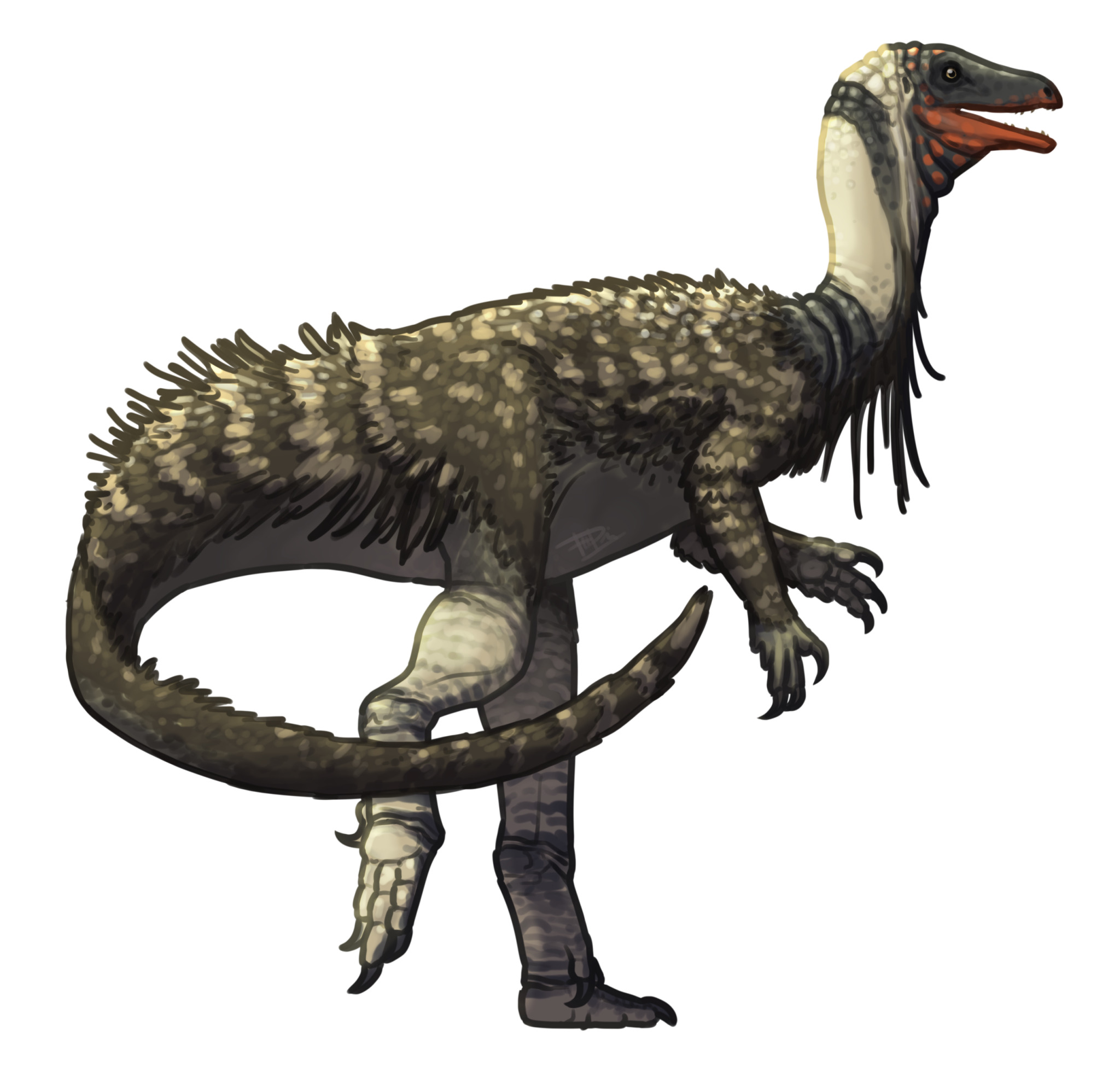 During the Permian and Triassic periods, all the major landmasses were joined together in the supercontinent Pangea (sometimes spelled Pangaea), which was shaped like a “C” that straddled the equator. It was surrounded by the Panthalassic Ocean (literally meaning “all the seas”), and enclosed the Tethys sea, which is really a bay. To get a sense of where the modern landmasses fit into Pangaea, try this interactive globe. In Mbiresaurus’s time, Zimbabwe was at about the same latitude as southern Brazil, and was connected somewhat closely, explaining why we find similar animals in both places. 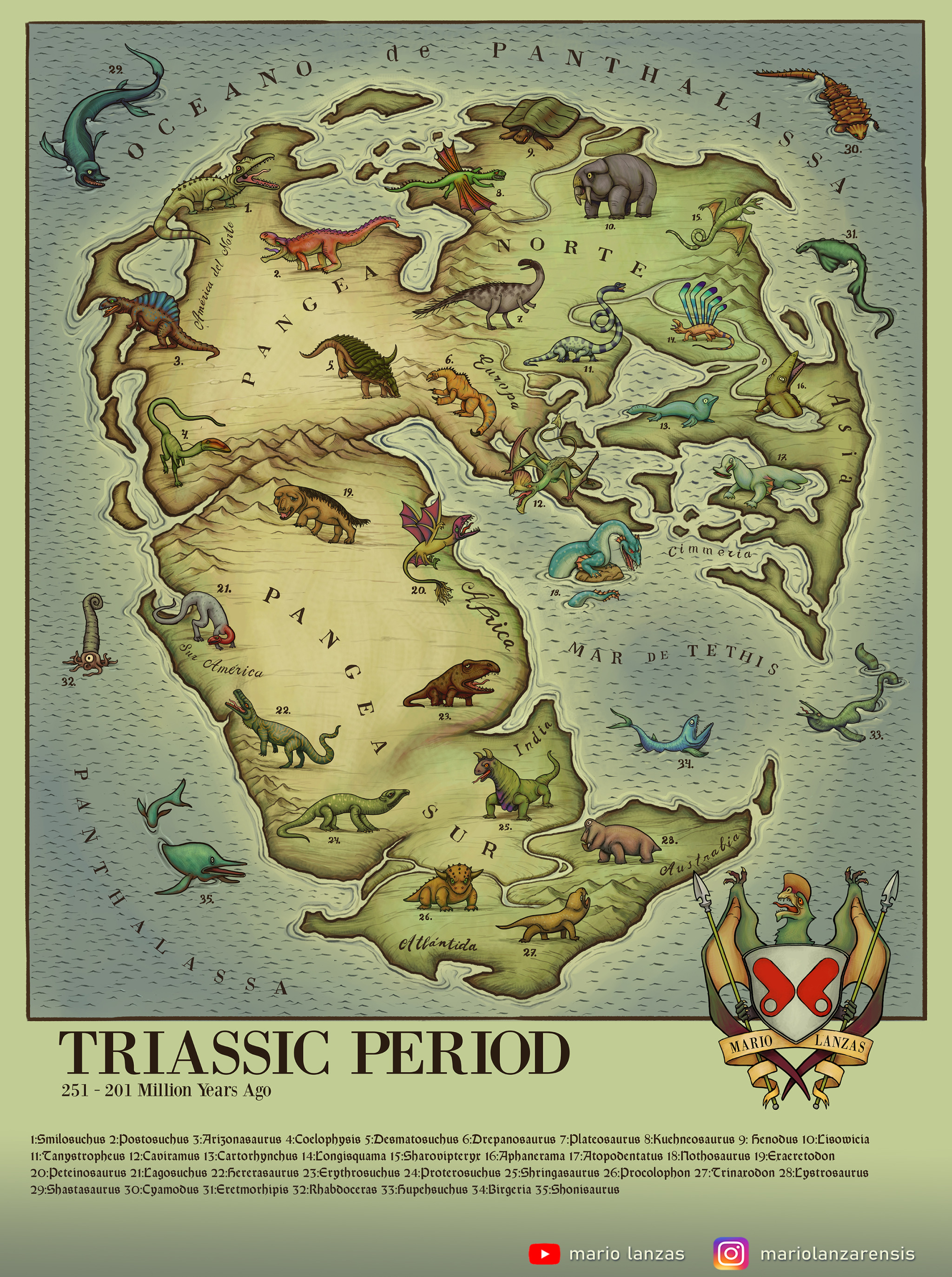 The enormous tropical Tethys bay was like the modern Caribbean on steroids. Water has more thermal mass than land, so the bay’s temperature remains high throughout the year, and since it’s bounded on three sides by land, it’s exposed to minimal currents that could equalize the temperature with the ocean outside. Because of the large temperature difference that shifted every half-year as the northern and southern parts of Pangea warmed and cooled, hot, moist air evaporating off the Tethys would be drawn alternately over each hemisphere in mega-monsoons, with brutal dry seasons in between. The middle of the “C” was dry year-round, forming an expansive desert. So while there were no major mountain ranges (though there was the moderate-height Central Pangean range, which included what would become the Appalachians and the Scottish Highlands), to hinder animal dispersal, they would still have been unable to walk from pole to pole.

This explains why early dinosaurs are only found on the southern continents–they arose there and weren’t able to disperse northward due to the desert. It also explains why the Carnian Pluvial Episode, a climatic shift that occurred between 234 and 232 million years ago (caused by Alaska’s right leg crashing into the rest of North America), was so important. The CPE brought warming and more evenly distributed rainfall across the globe, resulting in mass extinctions of many seasonal-adapted lifeforms, but also deleting the central Pangean desert. Once the dust settled, many of the plants and animals that would become major players in the rest of the Mesozoic and beyond, such as dinosaurs, corals, and conifers, had diversified and spread across the globe. 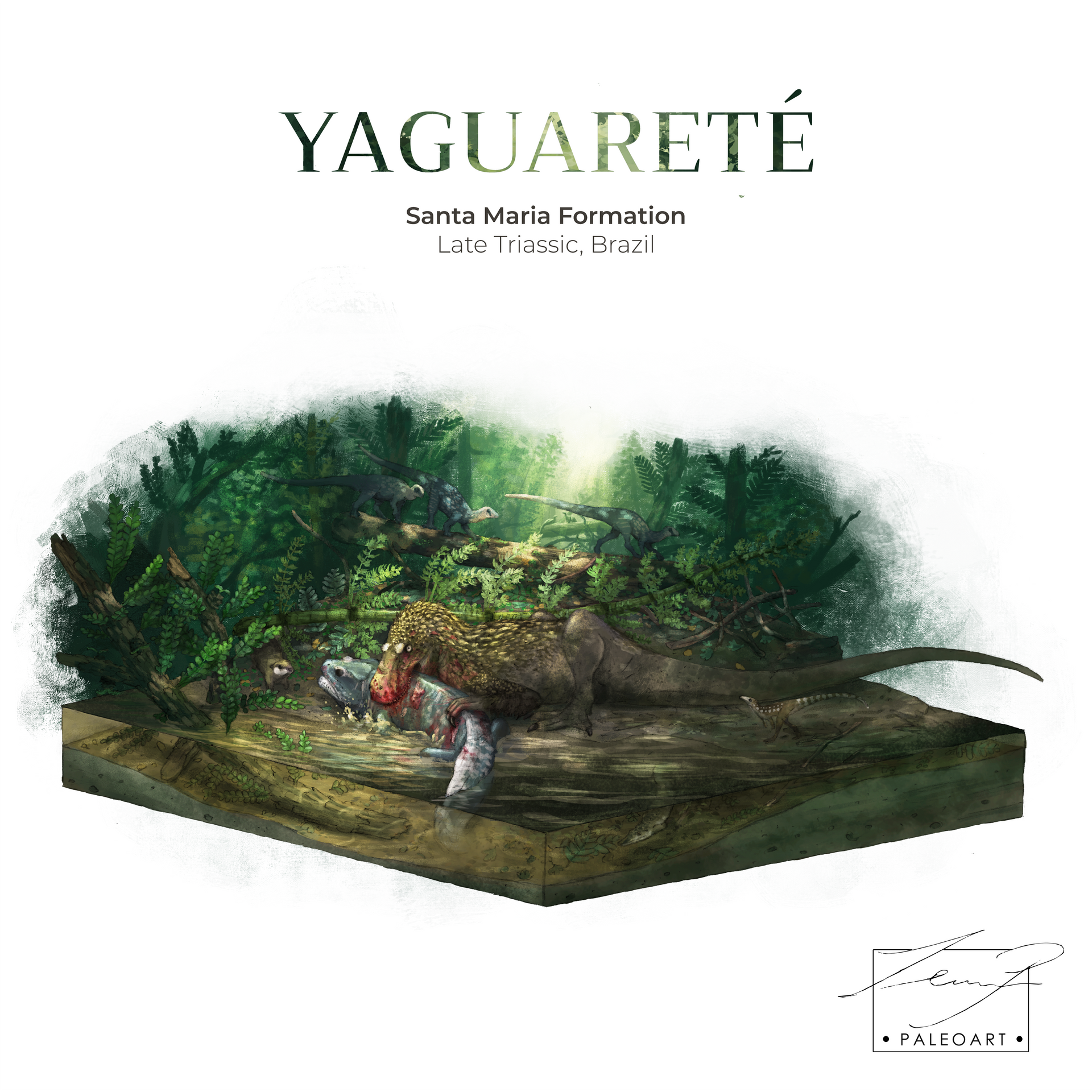 Above: Gnathovorax (center, yellow), a wolf-sized herrerasaurid (early predatory dinosaur) from Carnian Brazil, eating a temnospondyl in a fashion reminiscent of jaguars eating caimans. The bluish herbivores in the background are Saturnalia, another sauropodomorph, whose fossils tantalizingly might have been unearthed alongside Mbiresaurus in Zimbabwe. If true, that would be the first example of a genus known from both locations.

Herrerasaurids like Gnathovorax, which were the only large-ish carnivorous dinosaurs at the time, are thought to be very basal saurischian dinosaurs that left no descendants, rather than true theropods (the family including all other bipedal predatory dinosaurs, as well as birds). Like most dinosaurs of the Carnian, they had a very standard body plan, only slightly specialized for carnivory. Other contemporaries that represent important dinosaur families include Nhandumirim and Eodromaeus (below), which are early theropods, though they’re much smaller than any herrerasaurid and were probably insectivores; and Bagualosaurus, a larger, deer-sized sauropodomorph that seems to be more advanced than Mbiresaurus and Saturnalia. The very earliest ornithischians like Pisanosaurus wouldn’t show up for another two to four million years. 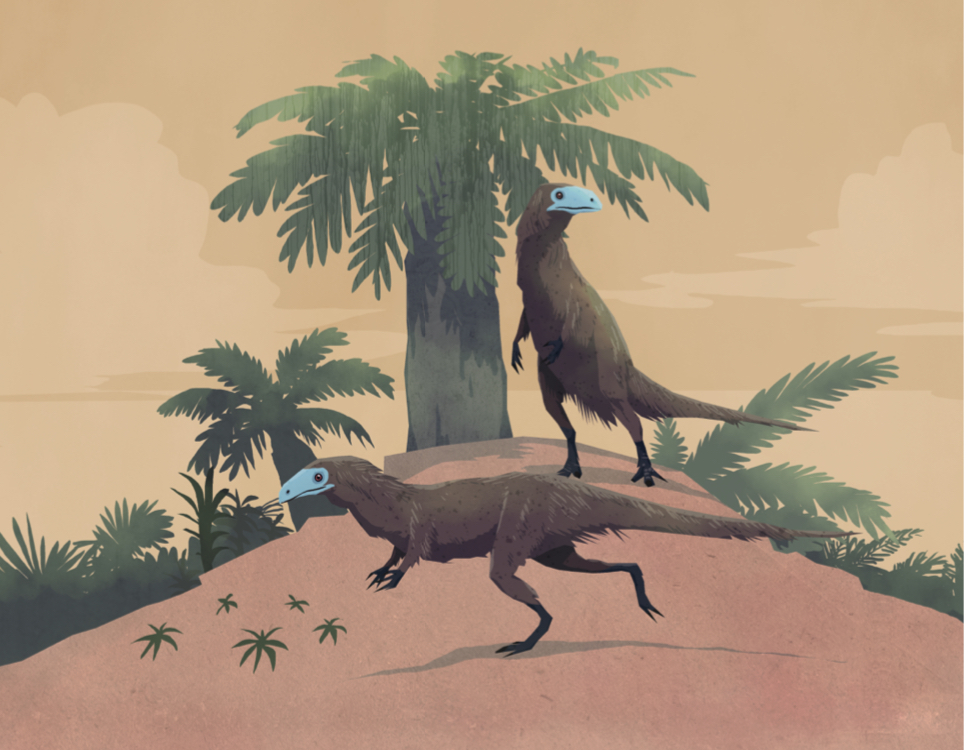 You may recall that I said that Mbiresaurus was Africa’s oldest confirmed dinosaur. There’s another candidate that might be a dinosaur, and is probably older, called Nyasasaurus, from the Middle Triassic of Tanzania, which is only known from fragmentary remains. It’s tentatively dated to 245 million years ago, which is at least ten million years older than any other known dinosaur, but recent dating of other, South American formations that are thought to be contemporaneous has moved the estimate closer to 237 million years old. This is still older than Mbiresaurus by two to seven million years, but due to the fragmentary nature of Nyasasaurus’s remains, it might turn out to be a silesaurid (a group of gracile quadrupedal herbivores closely related to dinosaurs). Above: Nyasasaurus reconstructed as a dinosaur, not a silesaurid. Rhynchosaurs joyfully eat plants in the background.

While researching this topic, I kept seeing Sterling Nesbitt’s name everywhere. I first heard about this guy as the intrepid grad student who was the first to notice–in over fifty years–that Effigia was a different animal than all the Coelophysis it had been buried with. That was in 2007; since then, Dr. Nesbitt has made a name for himself in Triassic vertebrates, especially having to do with the origins of dinosaurs. He was the lead author on not only Mbiresaurus, but also Nyasasaurus and a bunch of other famous Triassic reptiles like Tawa, Teleocrater, Aisilisaurus, and others.

I didn’t have time this week to make new art–too busy preparing for Halloween!–so the page image up top is the playing card I made of Jaklapallisaurus, a Late Triassic sauropodomorph similar in size to Bagualosaurus. However, it lived around 203 million years ago, around 30 million years later than the dinosaurs covered in this post. Thirty million years ago, our lineage still hadn’t diverged from that of Old World monkeys like baboons and colobus monkeys–a lot can change in that time!