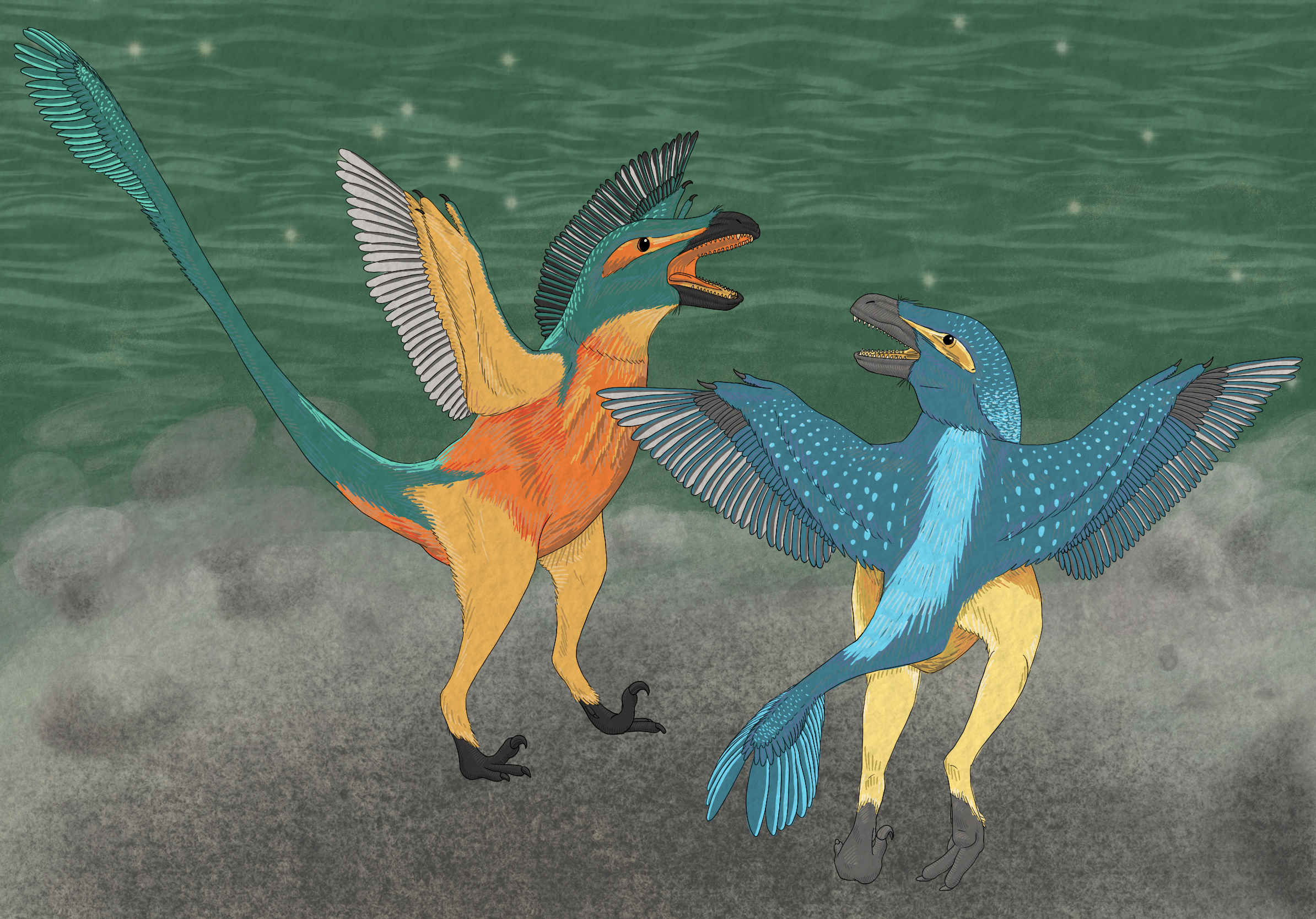 This post will be the first in a series of biome profiles, intended to depict an ancient time and place as a whole, comprehensive, living ecosystem. There are many impressive fossil localities that preserve tons of information about all levels of the environment, but most often, vertebrate fossils get an outsized chunk of the attention, and are observed in a vacuum. Hopefully this series will help to remedy that, and give you a better idea of how certain ancient ecosystems functioned, and what it would’ve been like to be there.

The Yixian Formation is a Lagerstatte (fossil location with exceptional preservation) in northeastern China containing fossils from the Early Cretaceous period (129.7-122.1 million years ago). Paleontologists only began studying the fossils from Yixian in the ‘90s, and the numerous examples of preserved feathers they unearthed helped to radically change the perception of dinosaurs during that time. Today, it continues to produce amazing new discoveries–it’s the home of such fan favorites as Yutyrannus the feathered tyrant, Sinosauropteryx the red panda mimic, and Liaoningosaurus the tiny semi-aquatic ankylosaur.

In the Early Cretaceous, Yixian was a lake surrounded by forest. The climate was temperate, with strong seasonal changes including snow in the winter. The lake was nutrient-rich and was full of plankton, and supported many types of filter-feeders, including the prolific little fish Lycoptera as well as ctenochasmatid pterosaurs (more on them later). Other fish present include ancestral cousins of today’s paddlefish, sturgeon, bowfin fish, and lamprey (fossil genera Protopsephurus, Peipiaosteus, Sinamia, and Mesomyzon, respectively). The invertebrate residents would also have looked familiar, with crabs, shrimp, snails, spiders, stick insects, wasps, beetles, and dragonflies living in and around the lake. 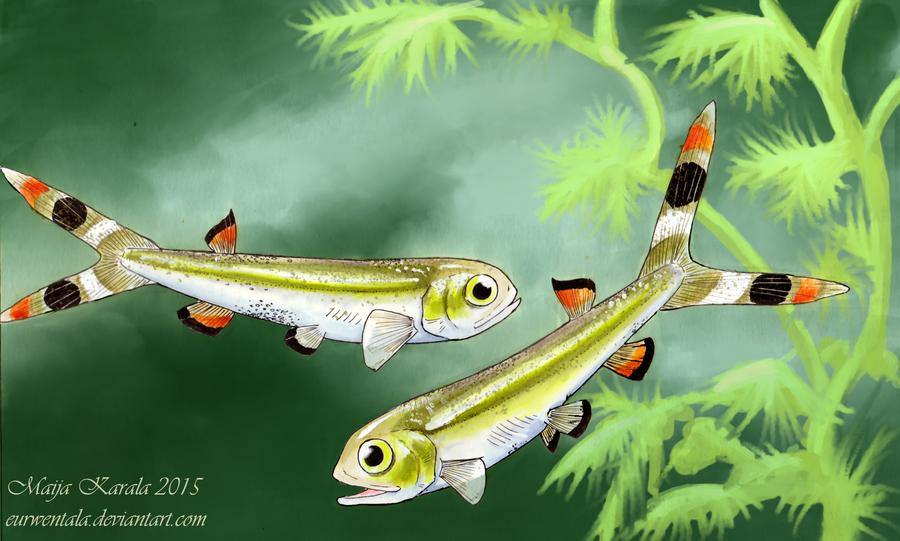 Above: The most common fossil in Yixian is the little filter-feeding fish, Lycoptera. It’s an important index fossil, allowing paleontologists to use its presence or absence to date other rocks of unknown age.

The forest was made up mostly of gymnosperms such as ginkgos, yews, cypress, and pines, including many living genera such as Brachyphyllum and Ginkgo. Horsetails grew at the edge of the lake, and ferns in the undergrowth of the forest. The first angiosperms (flowering plants) were getting their start here, such as Archaefructus, Leefructus, and Callianthus.

In addition to being the dawn of the plant revolution, the Early Cretaceous of Yixian was transitional for animals as well. There were three overlapping biotas–holdovers from the Jurassic, animals characteristic of the Early Cretaceous, and early representatives of lineages that would go on to be important in the Late Cretaceous–all living alongside one another.

It’s important to note that the formation spans 11 million years and is divided into many smaller bonebeds, so many of the following genera may not actually have overlapped in time. However, it’s likely that other, similar genera would’ve been around before and after, so the abundant diversity is not completely misleading.

Though not the most common animals at Yixian, there were a few large herbivores that filled a fair amount of different niches. Sauropods, which were the dominant herbivores of the Jurassic, had a few remnant genera in Early Cretaceous Yixian, while hadrosaurs, which would become very important in the Late Cretaceous, also had a few early representatives here. 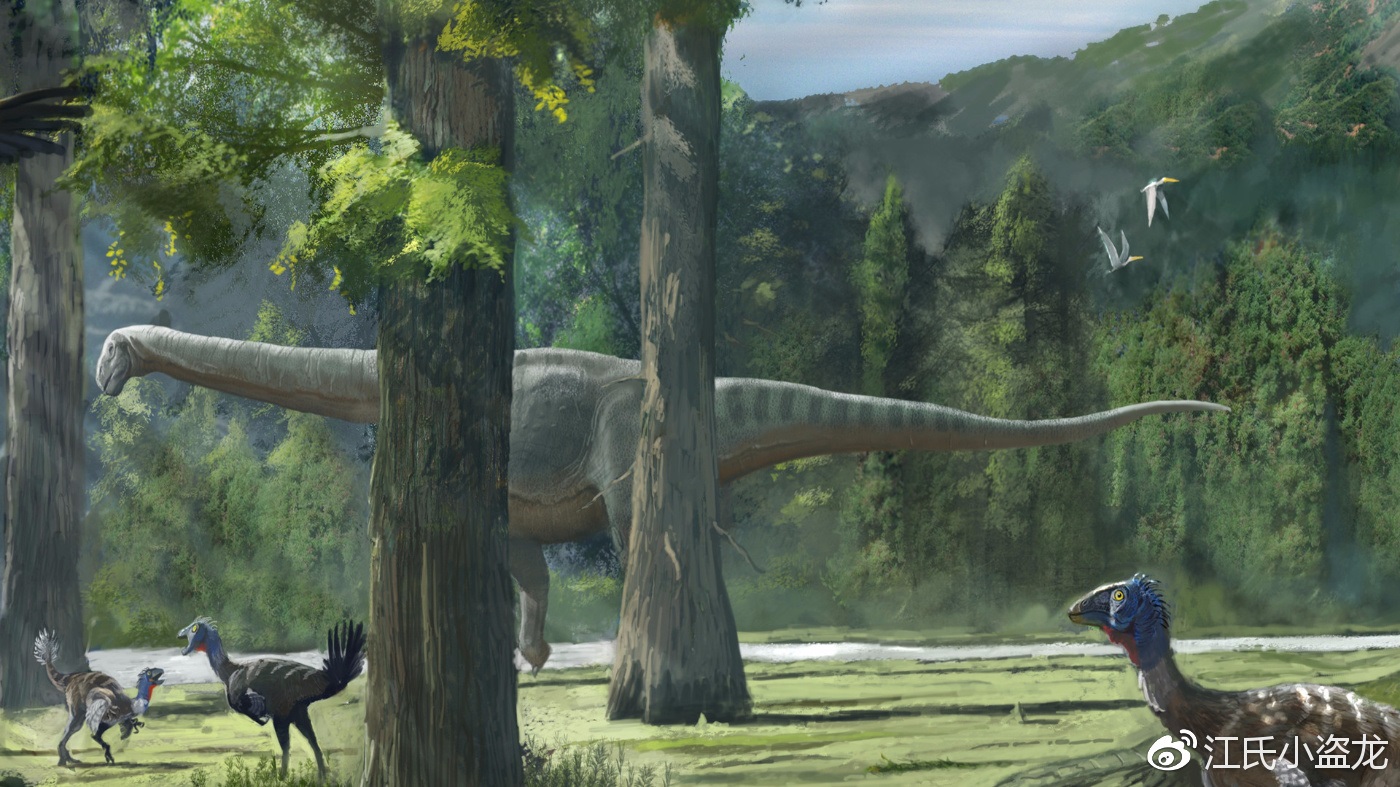 Above: Liaoningotitan was modestly sized compared to later titanosauriformes, but it and Dongbeititan, a closely related sauropod, would’ve been by far the largest herbivores in Yixian. Titanosauriformes are generally thought to have been high-browsers. 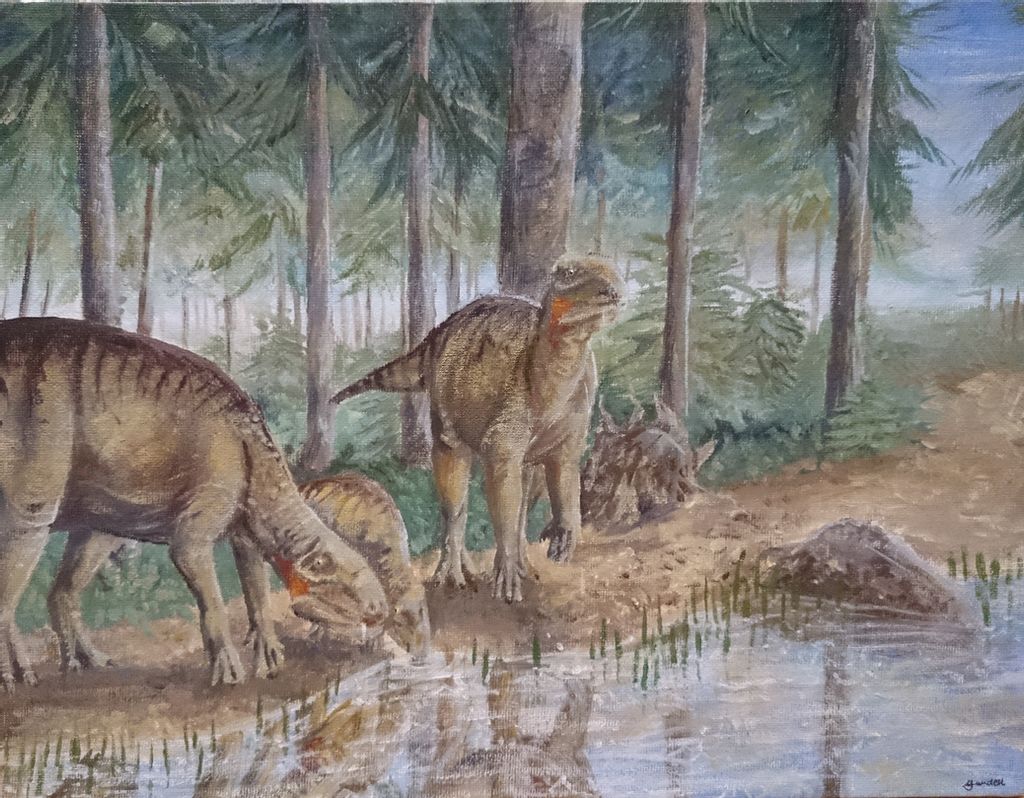 Bolong (above) and related hadrosauroid Jinzhousaurus were cow-sized grazers. Both are known from full skeletons, and while they both had the defensive thumb spike common to iguanodontians, Bolong was more quadrupedal while Jinzhousaurus was facultatively bipedal.

The role of small herbivore in Yixian would’ve been played by the basal ceratopsians (horned face dinosaurs), the cat-sized Liaoceratops and the famous, slightly larger Psittacosaurus. 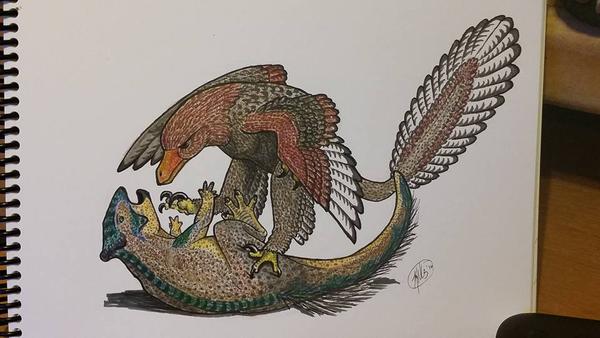 Above: An unfortunate Liaoceratops gets jumped by a hungry Zhenyuanlong (more on him later). 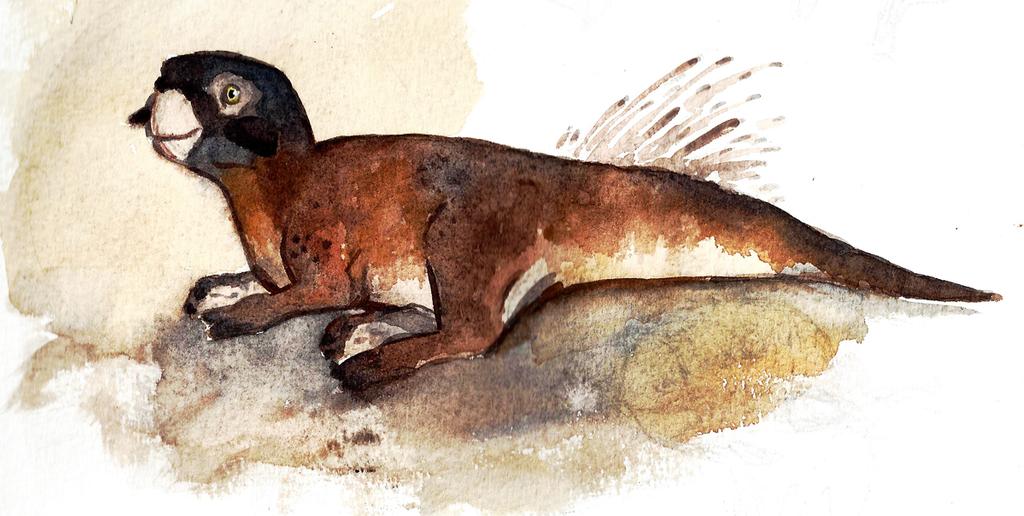 Above: Psittacosaurus, a basal ceratopsian known from a ludicrous amount of fossil material. It has the most named species of any non-avian dinosaur (12), is one of the few non-feathered dinosaurs whose color is known in detail, and many details of its lifestyle and ontogeny are well understood. Maybe I’ll do a dinosaur profile on it later (though it would definitely be a stretch to call this one “obscure”)! [Update: I did one; find it here.]

In addition to the herbivorous sauropods and ornithischians, there were also a couple of herbivorous theropods in the Yixian biota, including the small basal therizinosaur, Beipiaosaurus, the tiny basal ornithomimosaur, Hexing, and the rodent-like basal oviraptorosaur, Incisivosaurus. At the time of its discovery in 1999, Beipiaosaurus was the largest dinosaur known to sport a full fluffy coat, and through melanosome analysis we know that it was dark brown, at least on the back of the neck. 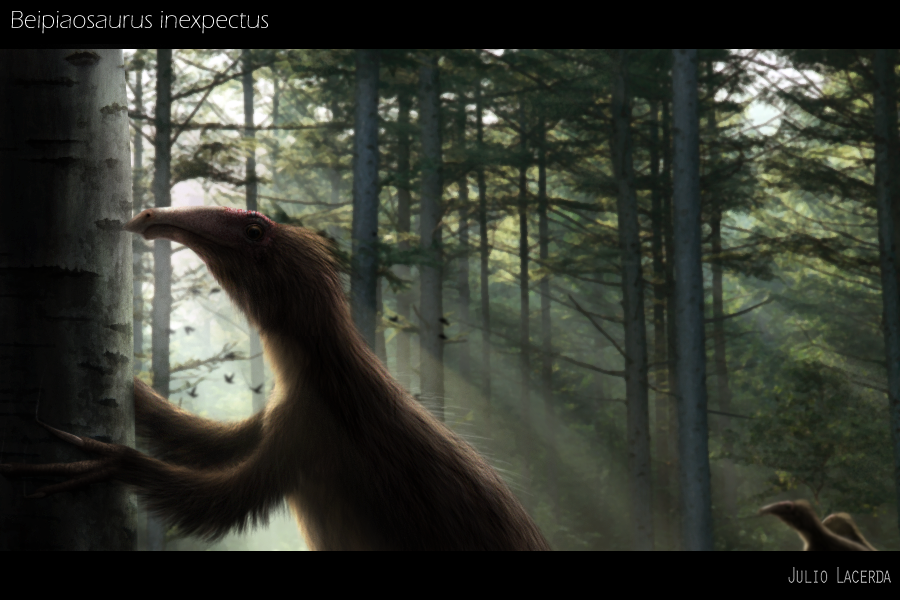 Above: Beipiaosaurus sharpening its claws on a tree. These strange beaked theropods filled a similar niche to giant pandas and ground sloths. 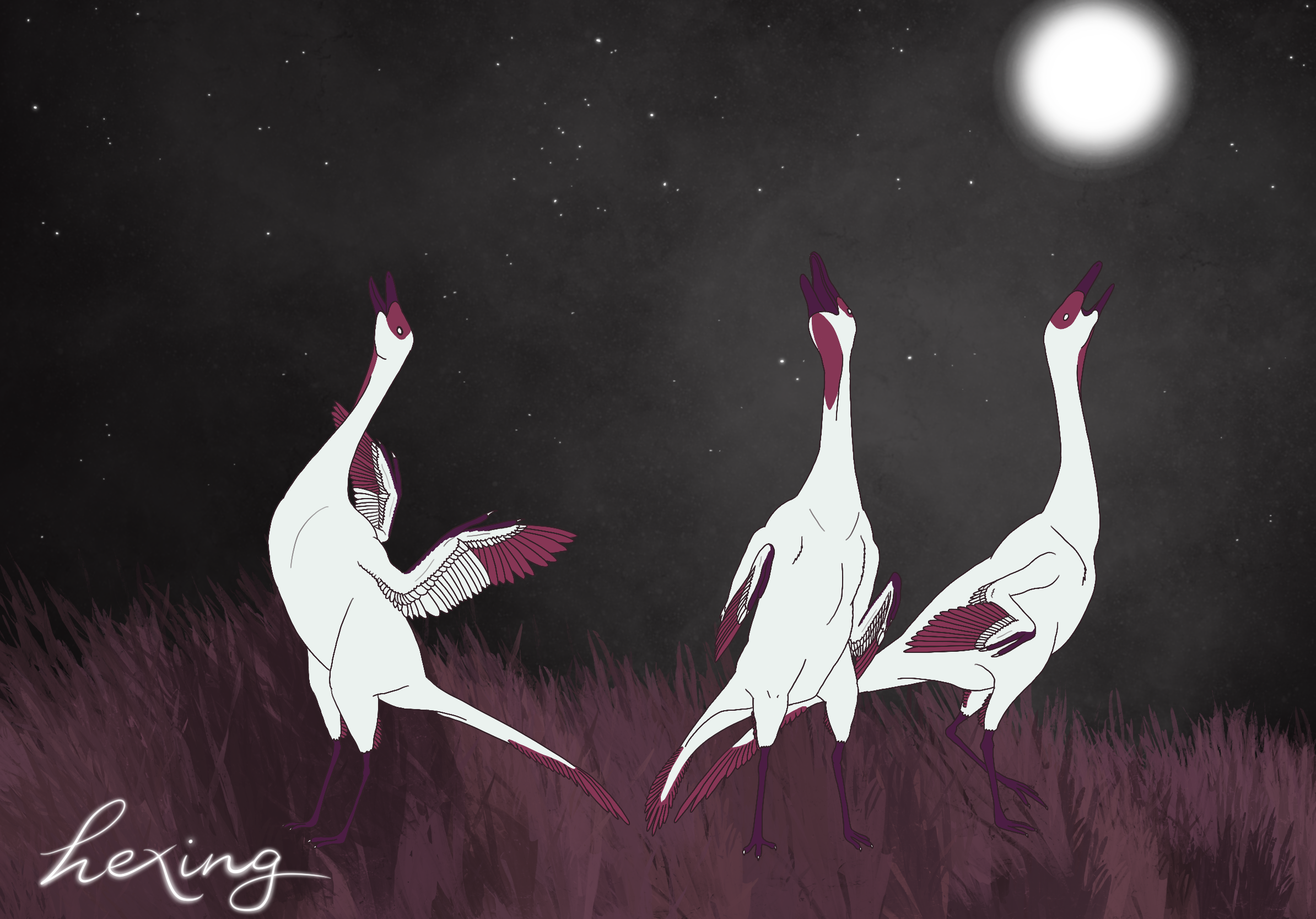 Above: Hexing, at approximately one meter long, is currently the smallest known ornithomimosaur. 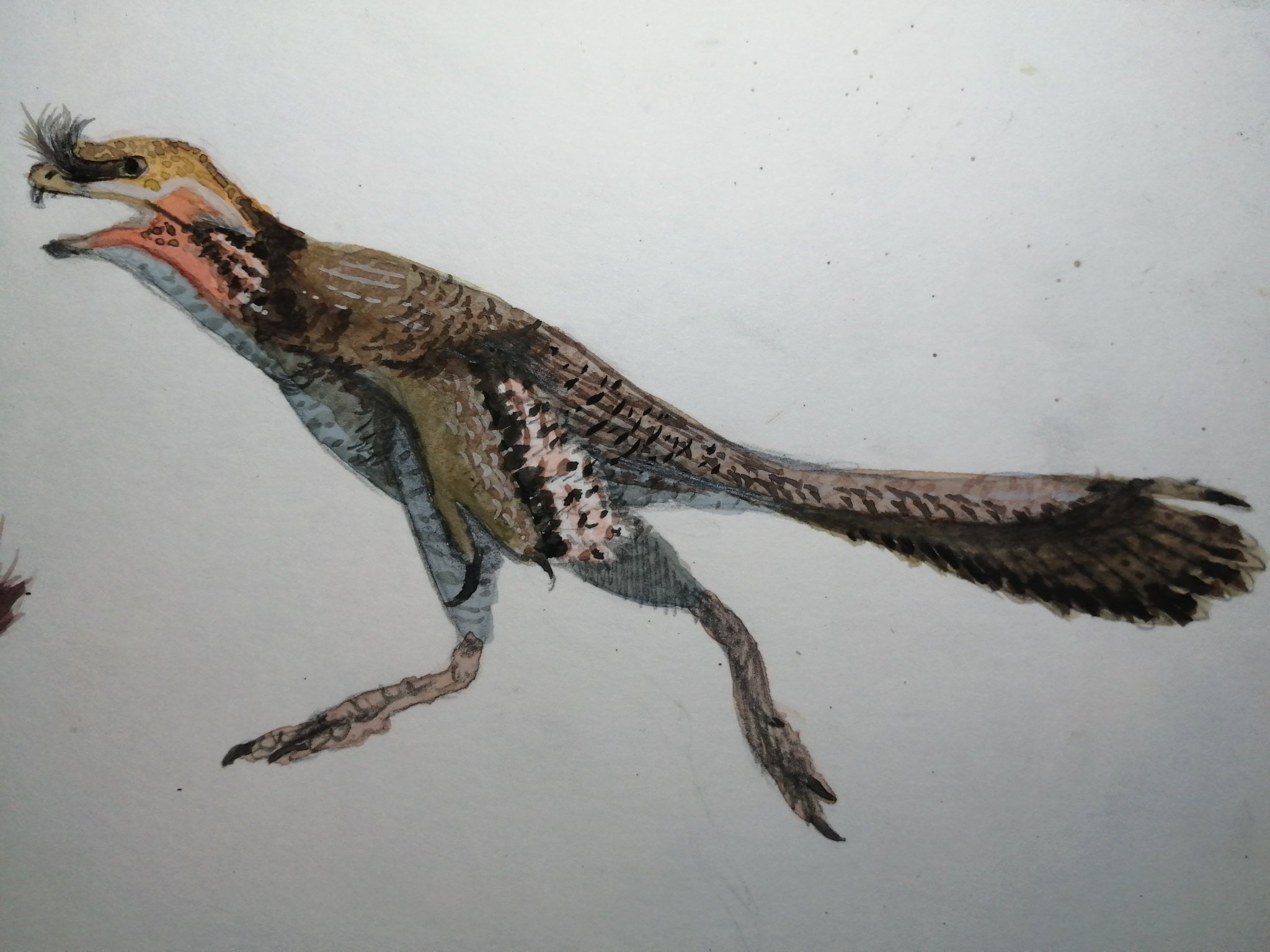 Above: Incisivosaurus was a turkey-sized herbivore with rodent-like flattened front incisors. A great deal is known about the way this dinosaur’s feathers grew, changed, and molted throughout its life!

Therizinosaurs, ornithomimosaurs, and oviraptorosaurs would all become much more diverse and abundant later in the Cretaceous period, so these three small theropods could be seen as heralds for things to come.

Many varied sizes of terrestrial carnivores, mainly theropods but also some early mammals, coexisted in Yixian. The apex predator of the ecosystem was the famous Yutyrannus, a basal tyrannosaur, which, at 4 tonnes is currently the largest known dinosaur to have had a full coat of fluff. 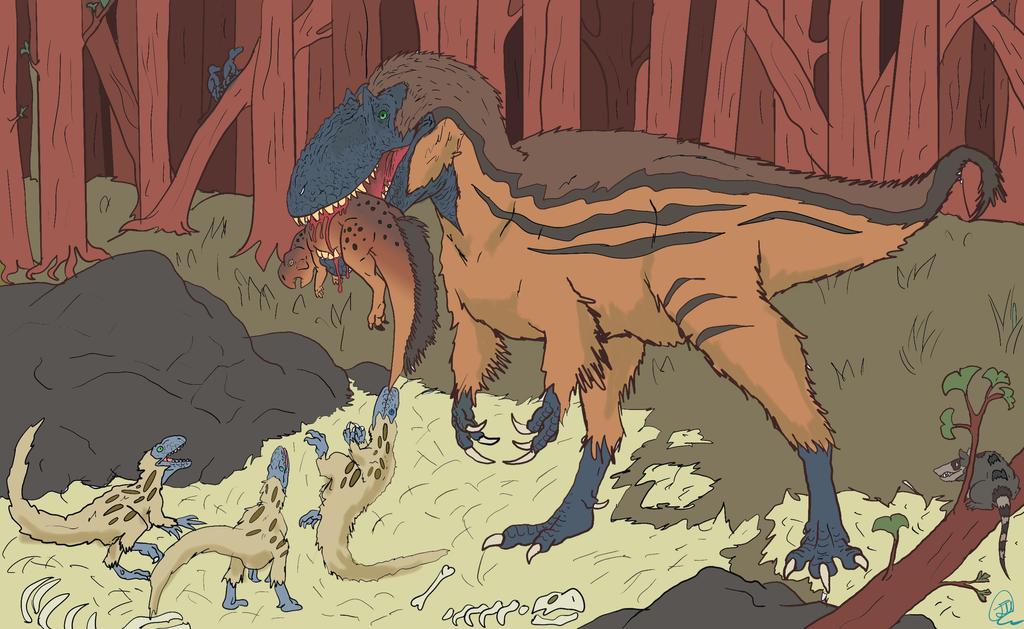 Above: a mother Yutyrannus brings home an unfortunate Psittacosaurus for her chicks, while an unnamed early mammal, possibly Eomaia, waits for leftovers.

The welterweight class of predators included the wolf-sized dromaeosaurs Tianyuraptor and Zhenyuanlong, the giant compsognathid Sinocalliopteryx, and the basal tyrannosauroid Dilong. Zhenyuanlong is notable for changing our understanding of the evolution of wings, and Dilong is notable for being an ancestral cousin to the giant tyrannosaurs of the Late Cretaceous, including Tarbosaurus and Tyrannosaurus. 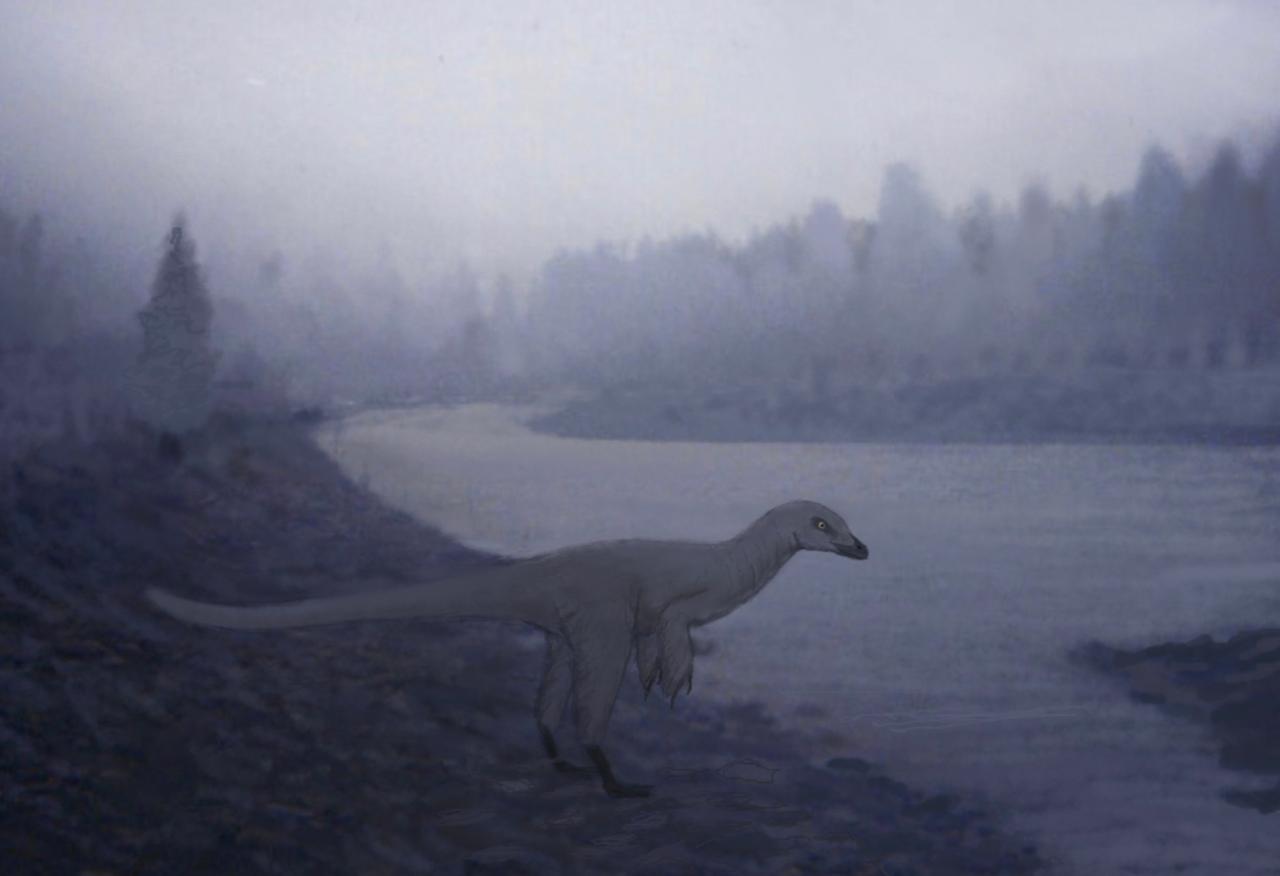 Above: Sinocalliopteryx, a very large compsognathid, getting an early start to the day. Compsognathids were more diverse in the Late Jurassic, and most genera were very small–closer to chicken-sized than wolf-sized. Two Sinocalliopteryx specimens have been found with identifiable gut contents: one had eaten the leg of a Sinornithosaurus, a small dromaeosaur (more on him later), and the other had eaten two Confuciusornis, a type of bird, and an unidentified ornithischian. 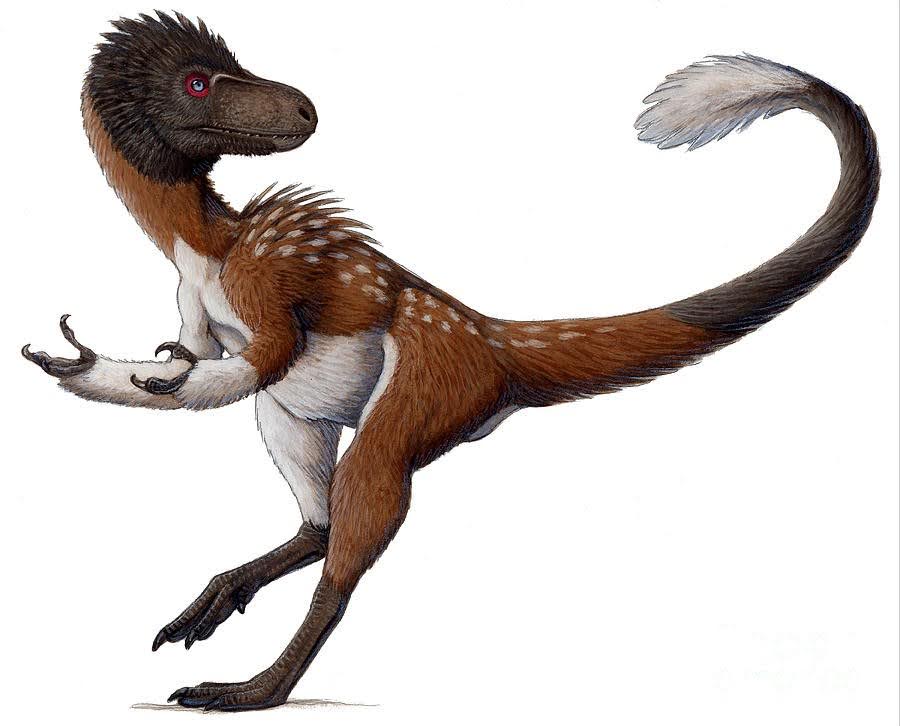 Above: Dilong, a small early tyrannosauroid more closely related to Tyrannosaurus than Yutyrannus. 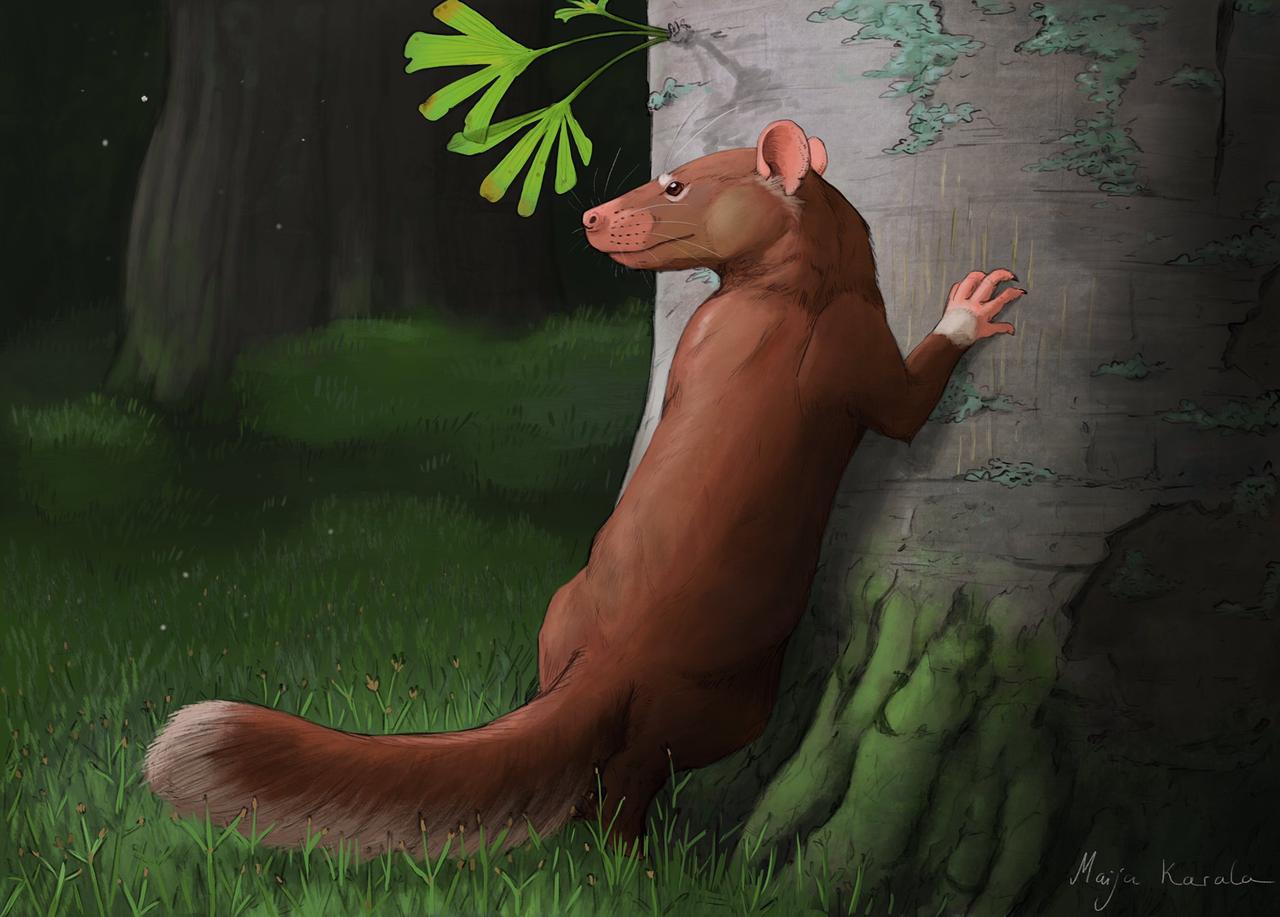 Above: the wolverine-sized Repenomamus, which is known from gut contents to have preyed upon small dinosaurs, including juvenile Psittacosaurus. Not all Mesozoic mammals were pushovers! 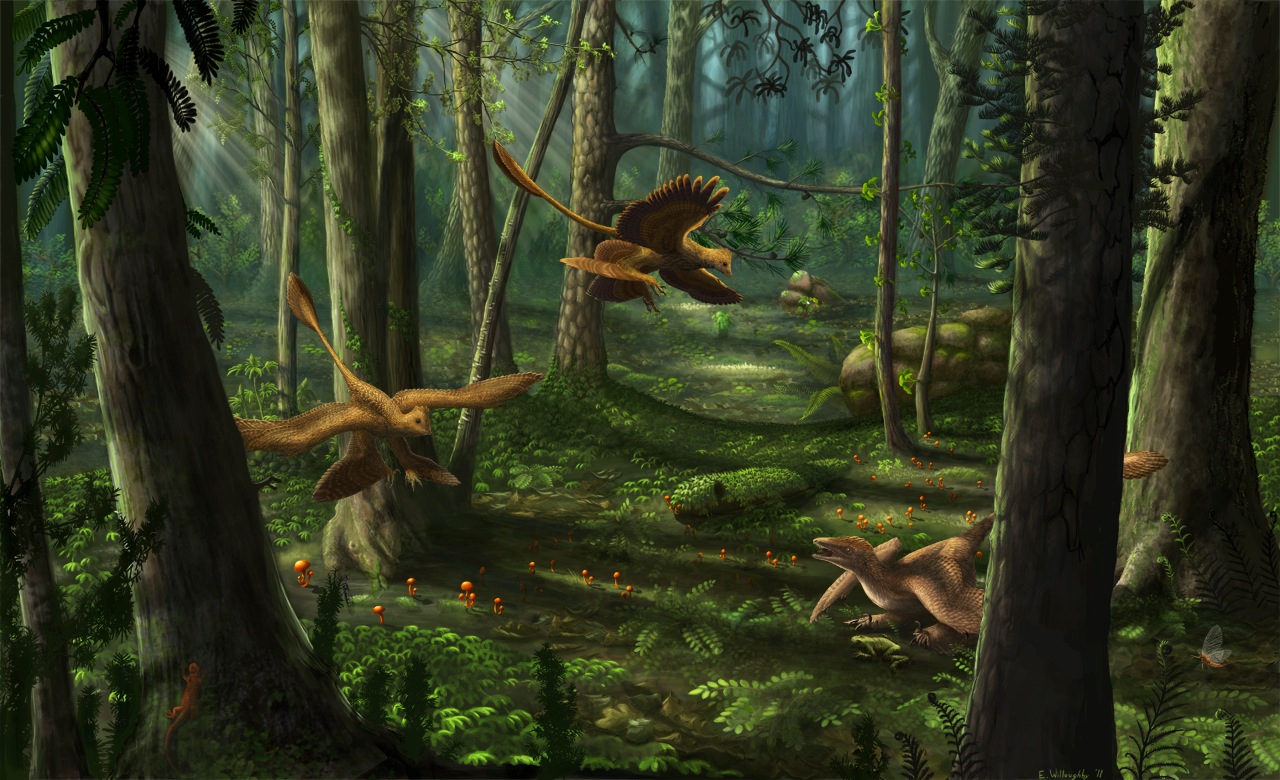 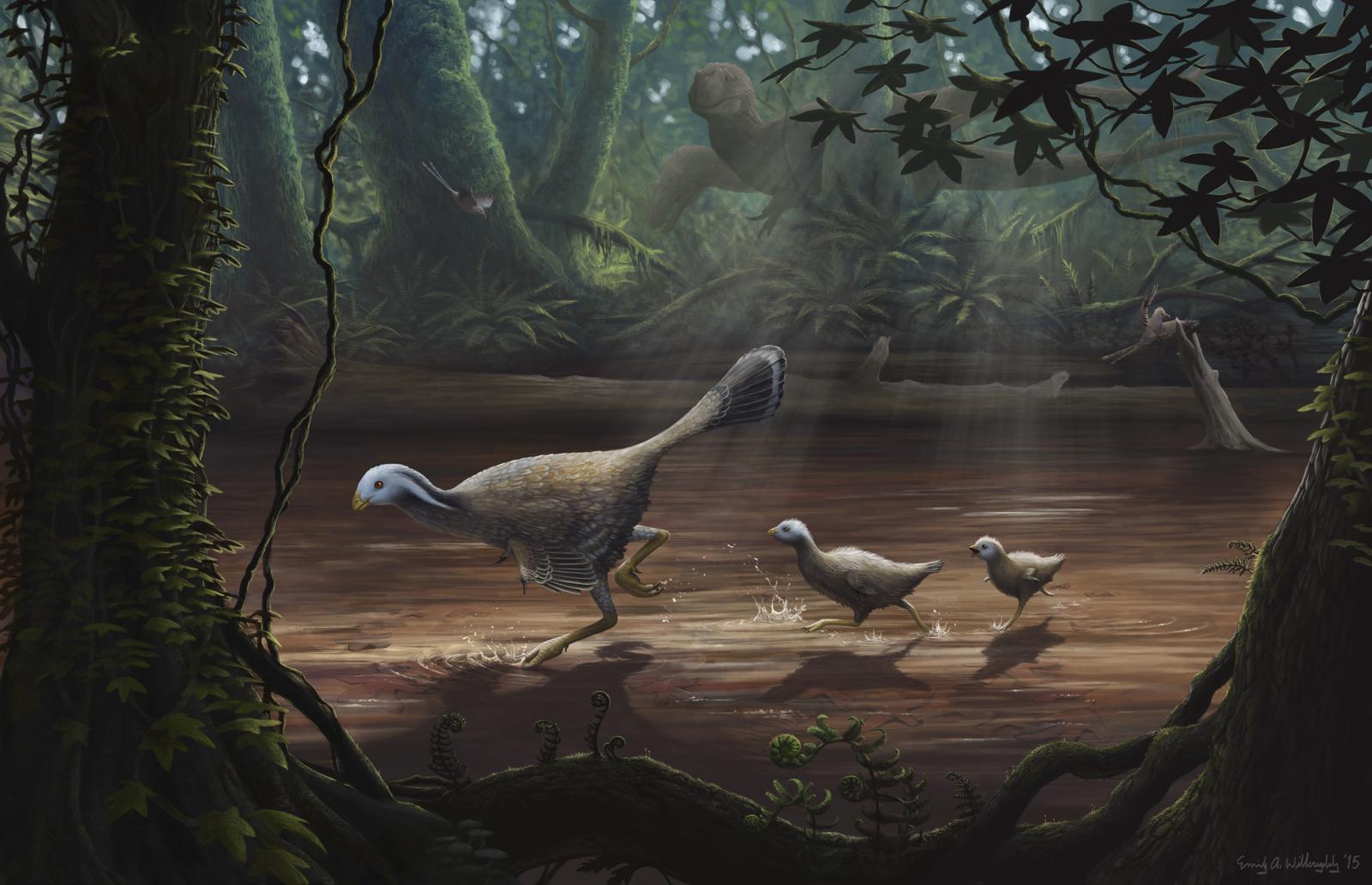 Above: A mother Caudipteryx, a small early oviraptorosaur, herds her chicks across a creek. 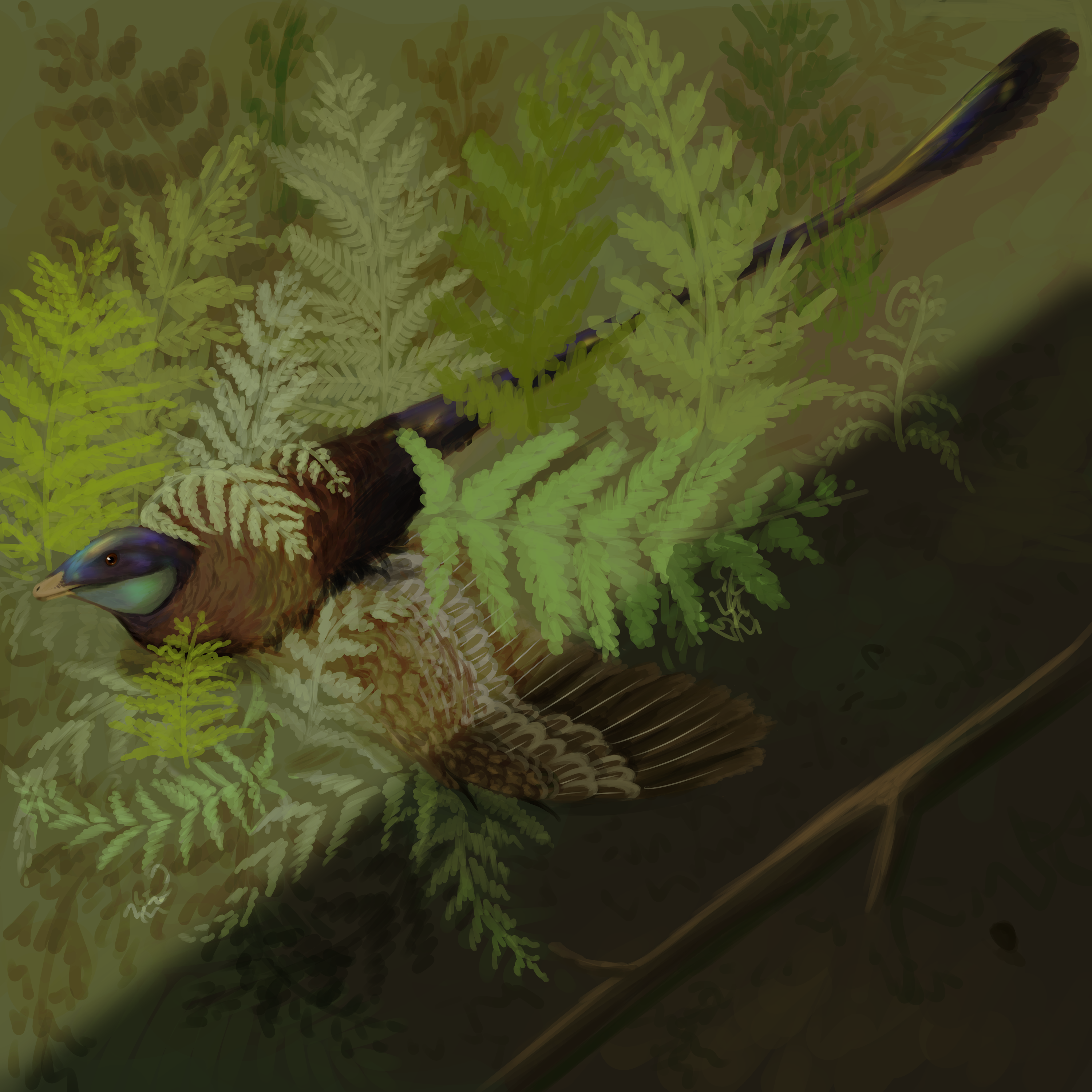 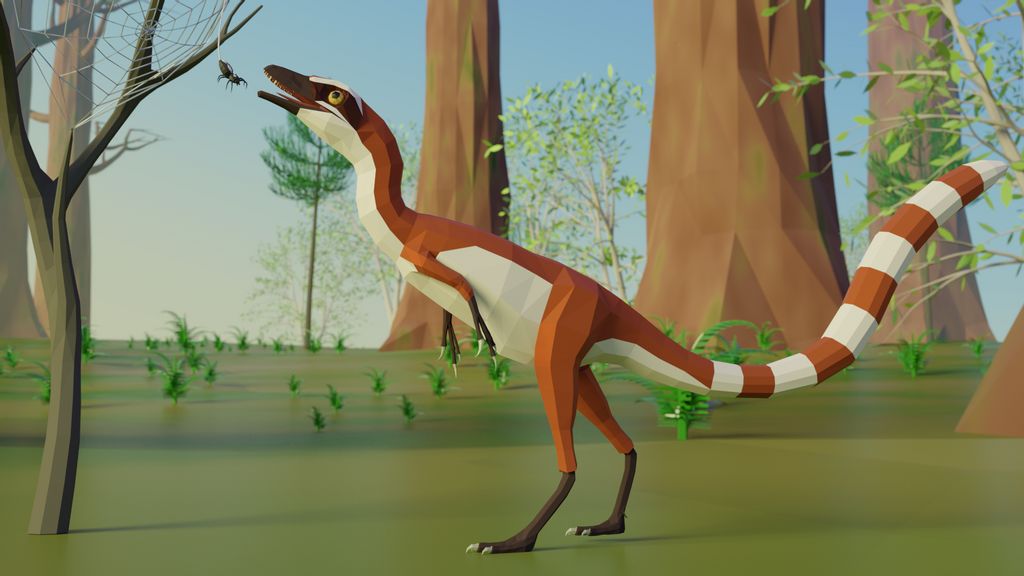 Above: the famous Sinosauropteryx, one of the few dinosaurs whose life coloration is known in detail.

While pterosaurs came in a wide variety of shapes, sizes, and ecological roles throughout their history, Yixian was home to just a few types: the filter-feeding comb-toothed ctenochasmatids, the piscivorous boreopterids, the terrestrial predatory tapejarids, and the opportunistic istiodactylids.

Ctenochasmatids (meaning “comb jaw”) were a group of basal pterodactyloid pterosaurs that had long snouts full of closely packed teeth. They would have waded in shallow water and strained water through their combs to get mouthfuls of tiny invertebrates, like a modern spoonbill. (One wonders, with a similar diet, if ctenochasmatids were similarly bright pink!) 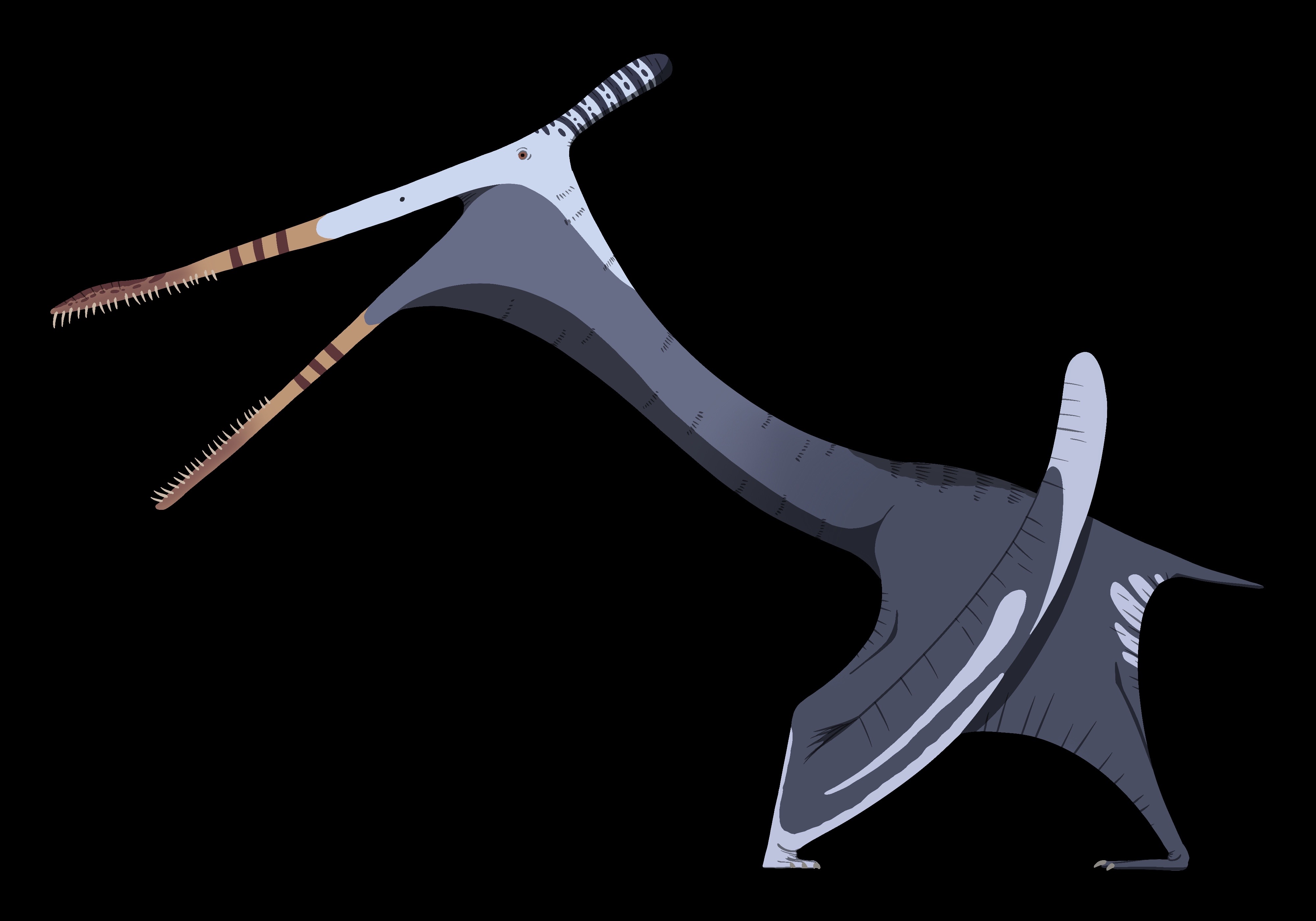 Above: the giant ctenochasmatid, Moganopterus, had a 5-7m wingspan. Funny how big a body one can support just by eating enough microscopic specks!

The boreopterids were another group of basal pterodactyloids that had long snouts full of teeth–but they used theirs for catching fish. The representatives of this group that lived in Yixian included the large Guidraco, Boreopterus, and Zhenyuanopterus (which may be synonymous with Boreopterus). 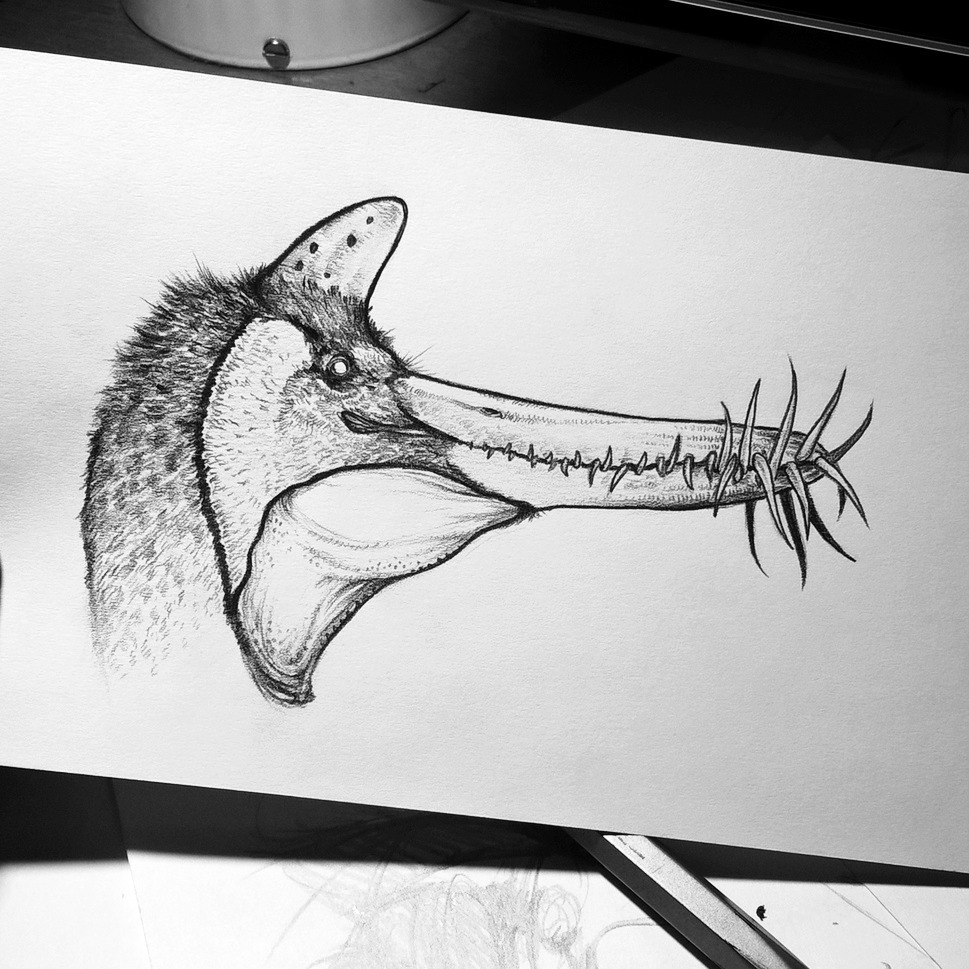 Above: Guidraco, meaning “evil ghost dragon,” was a large piscivore and the only known dual-typed pterosaur (just kidding!). Many animals throughout history had that style of wicked interlocking needle teeth, but since none do today it’s hard to imagine how exactly they were used.

Here’s another group that would become much more diverse and disparate later in the Cretaceous: the crazy-crested toothless tapejarids. While later forms like Tapejara and Tupandactylus had crests that were larger than the rest of their bodies, the only Yixian tapejarid, Eopteranodon, was small-bodied and had a modest crest by comparison. These toothless pterosaurs are thought to have been terrestrial stalkers that hunted small prey like lizards and small mammals. 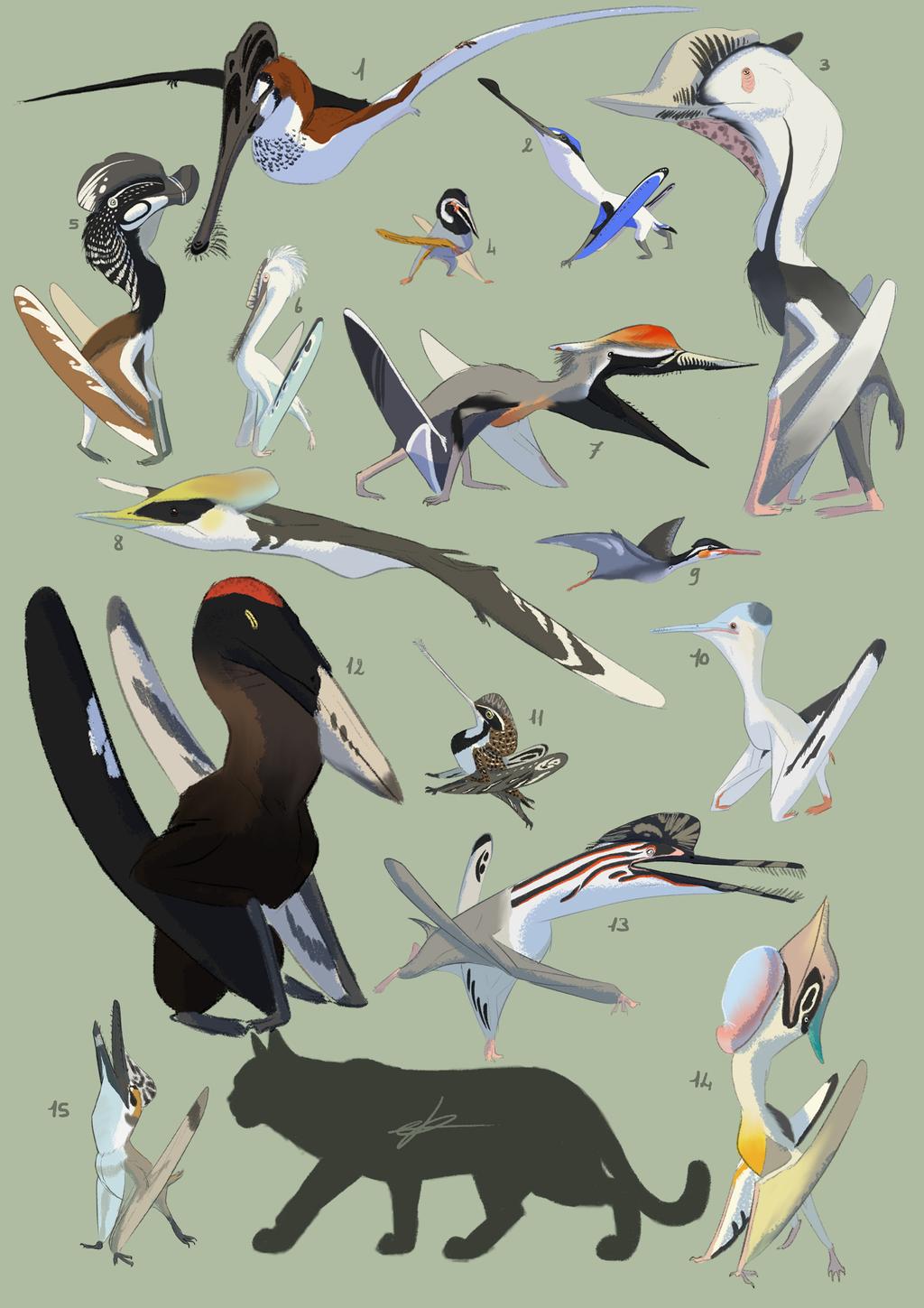 Above: A collection of cat-sized or smaller pterodactyloid pterosaurs. Eopteranodon is number 8, and Gegepterus is number 2.

The last main niche filled by pterosaurs at Yixian was the generalist role, played by the istiodactylids. These were small to medium crestless pterosaurs with rather unimpressive teeth, that sort of split the difference between the completely toothless tapejarids and the toothy boreopterids, and would’ve done both terrestrial stalking and fishing depending on the situation. These included Luchibang, Longchengpterus, Haopterus, and others. 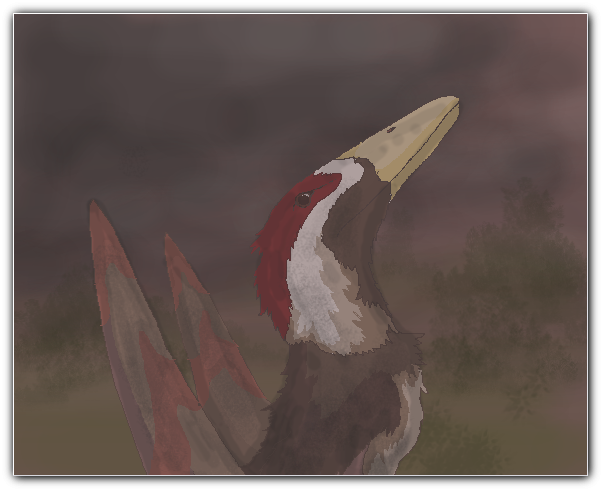 Above: An unnamed istiodactylid, possibly Haopterus. The coloration and scene sort of remind me of a raccoon.

The lake itself at Yixian also supported a number of charismatic residents, such as the strange aquatic diapsids known as choristoderes and a couple of turtles, including one relative of modern snapping turtles, Manchurochelys. Yixian was also home to the wacky little aquatic ankylosaur, Liaoningosaurus. 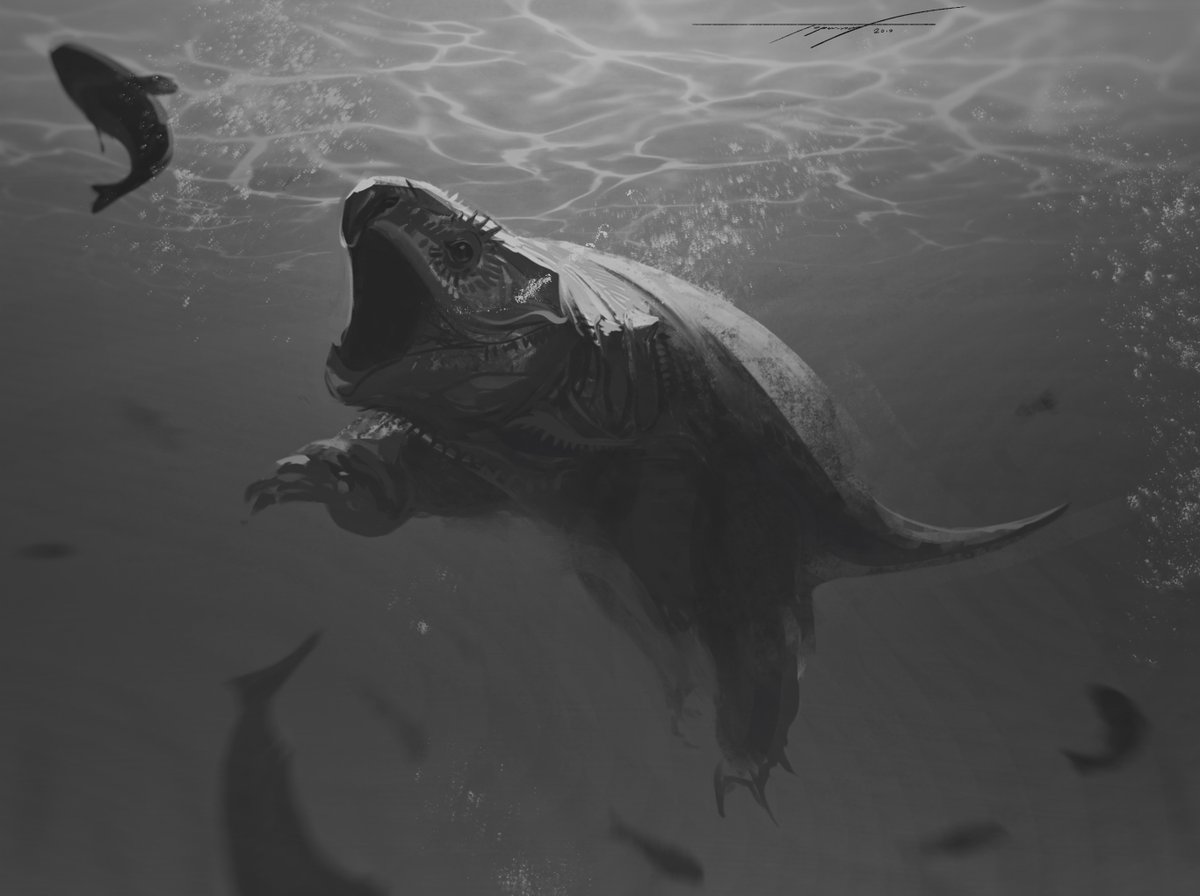 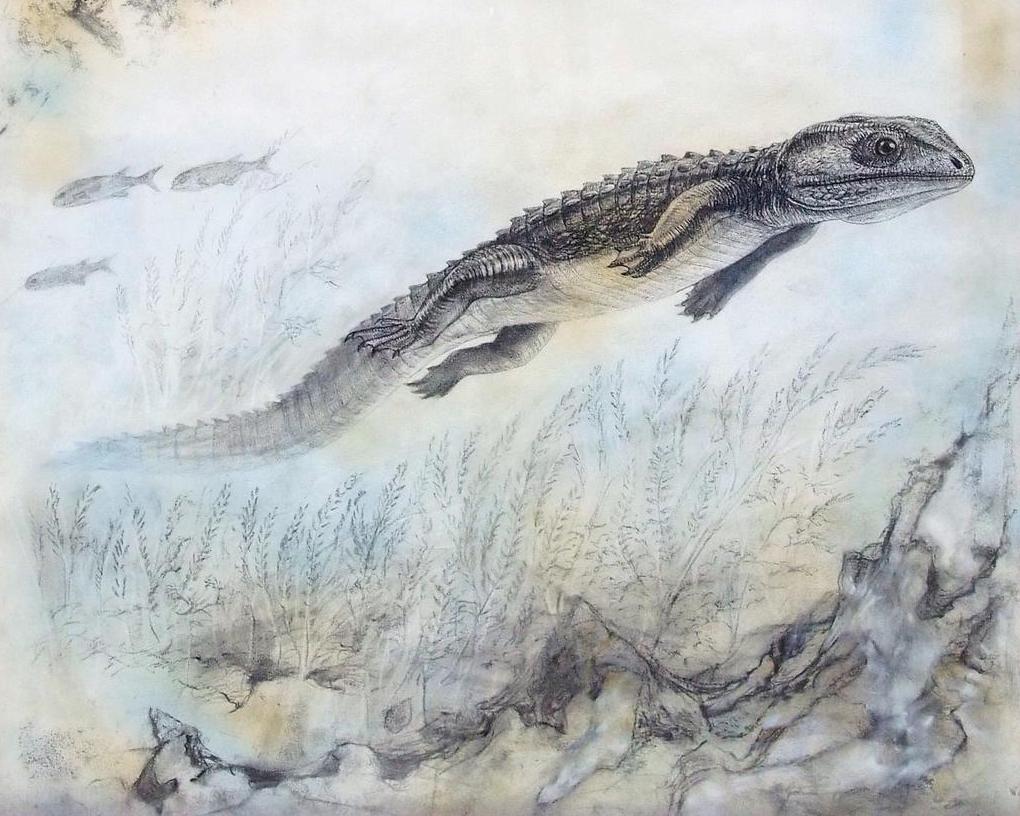 Above: The little short-necked choristodere, Monjurosuchus. It was only a little over a foot long. 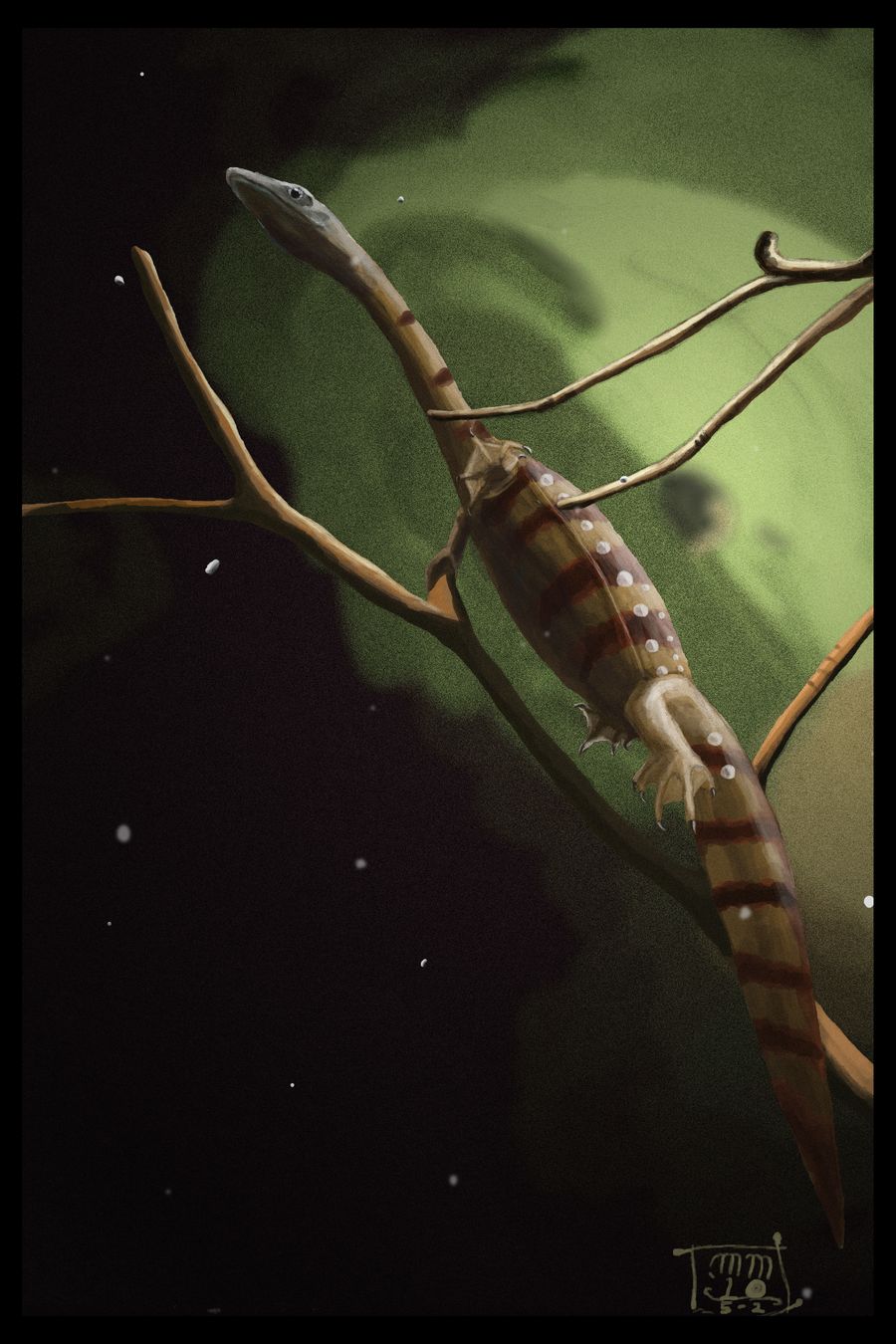 Above: The little long-necked choristodere, Hyphalosaurus, was also only about a foot long.

While so far we’ve only seen animals that look very foreign, many of the small vertebrates of Yixian–lizards, small mammals, amphibians, and birds–would’ve seemed familiar. Birds were just barely getting started, but were already pretty diverse, and though many of the small mammals weren’t closely related to modern mammals, they would’ve looked quite similar to rats, squirrels, and chipmunks, since they lived a similar lifestyle. Some notable mammals include Eomaia, Gobiconodon, Jeholodens, and Sinodelphys; amphibians include the frogs Callobatrachus and Liaobatrachus, and the salamander Sinerpeton; and there was a gliding lizard known as Xianglong.

The bird population at Yixian consisted of an interesting conglomeration of very primitive and more advanced types. 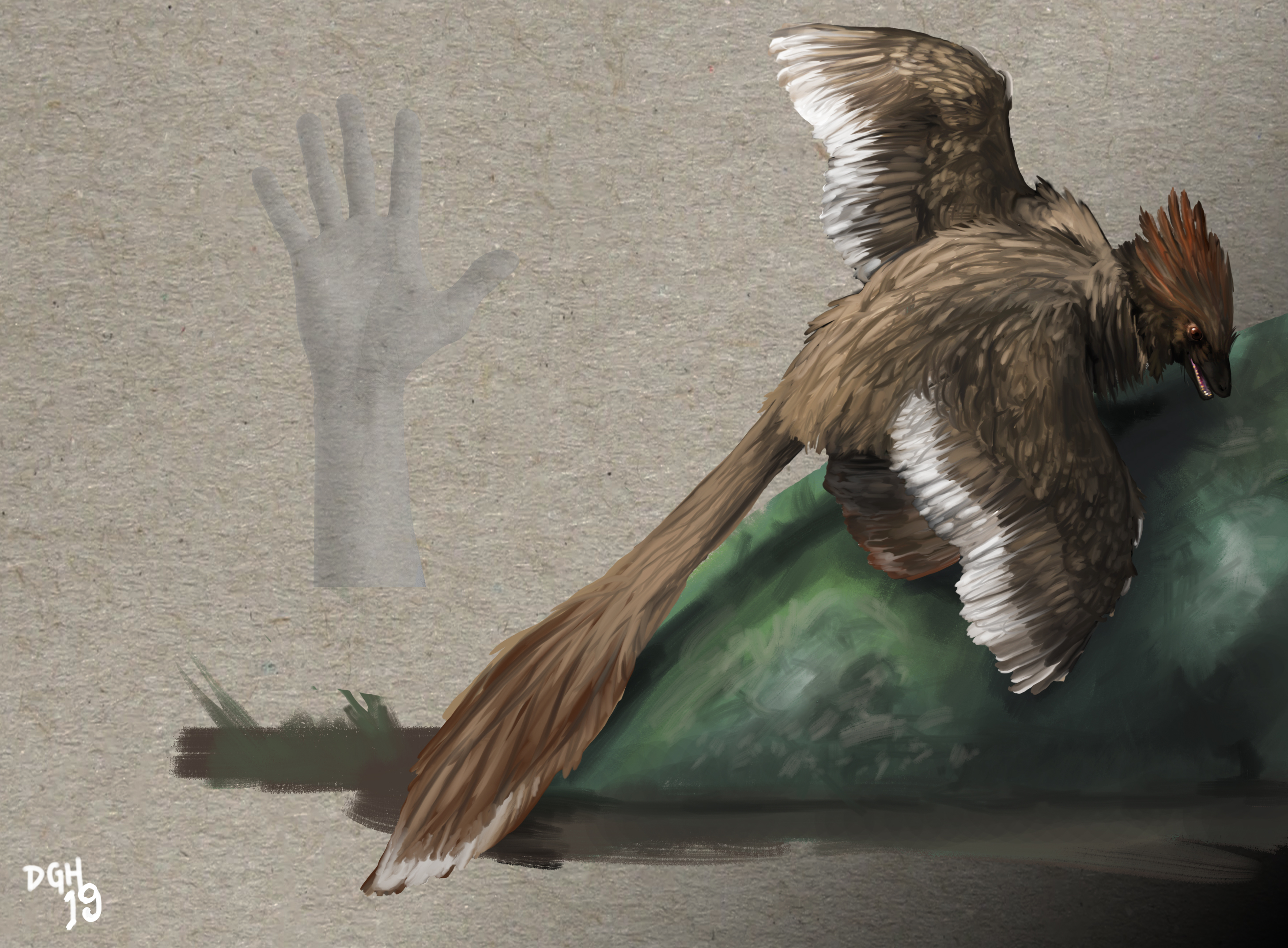 Above: Yixianosaurus was an anchiornithid, a representative of a group of avialans more primitive than Archaeopteryx, which had dense, messy, fur-like feathers that wouldn’t’ve been very effective for flying. They also retained the long tails and toothy snouts characteristic of non-avian dinosaurs.

On the other extreme, Eogranivora would have looked almost indistinguishable from a modern bird–it had a toothless beak and a crop, or an expanded portion of the esophagus for storing food common among modern birds. Its name means “dawn grain eater,” since its holotype fossil had seeds preserved within the crop, making it the oldest known seed specialist. 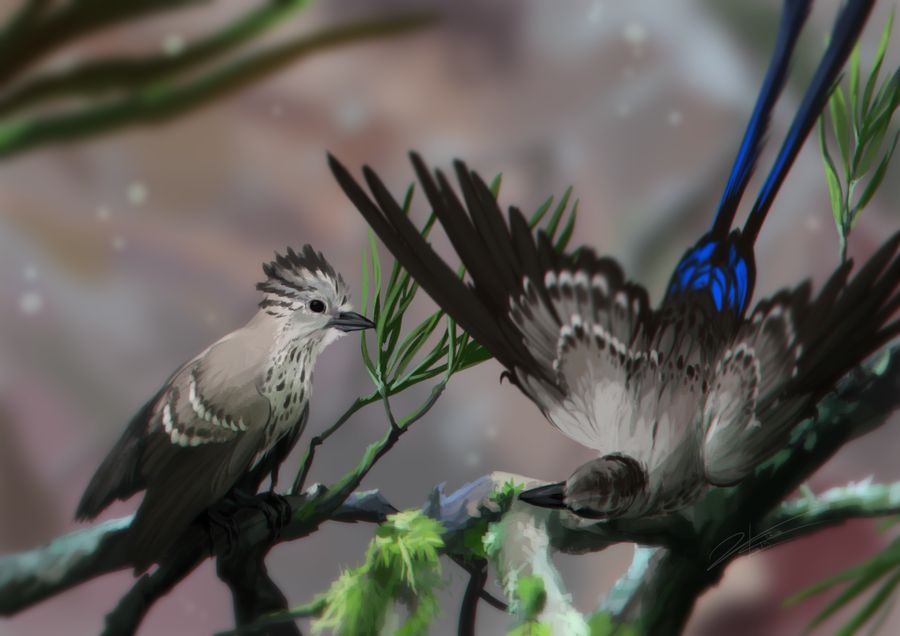 Another relatively modern-looking bird was Confuciusornis, known from hundreds of fossils, many of which preserve the two long ribbonlike tail feathers thought to be a sexually dimorphic characteristic.

Other birds at Yixian would have fallen in between in terms of obvious basal and derived traits–many, such as Hongshanornis and Shanweiniao, had beaks on the front of their snouts but teeth in the back, and there was much experimentation with different tail types among various groups of birds. 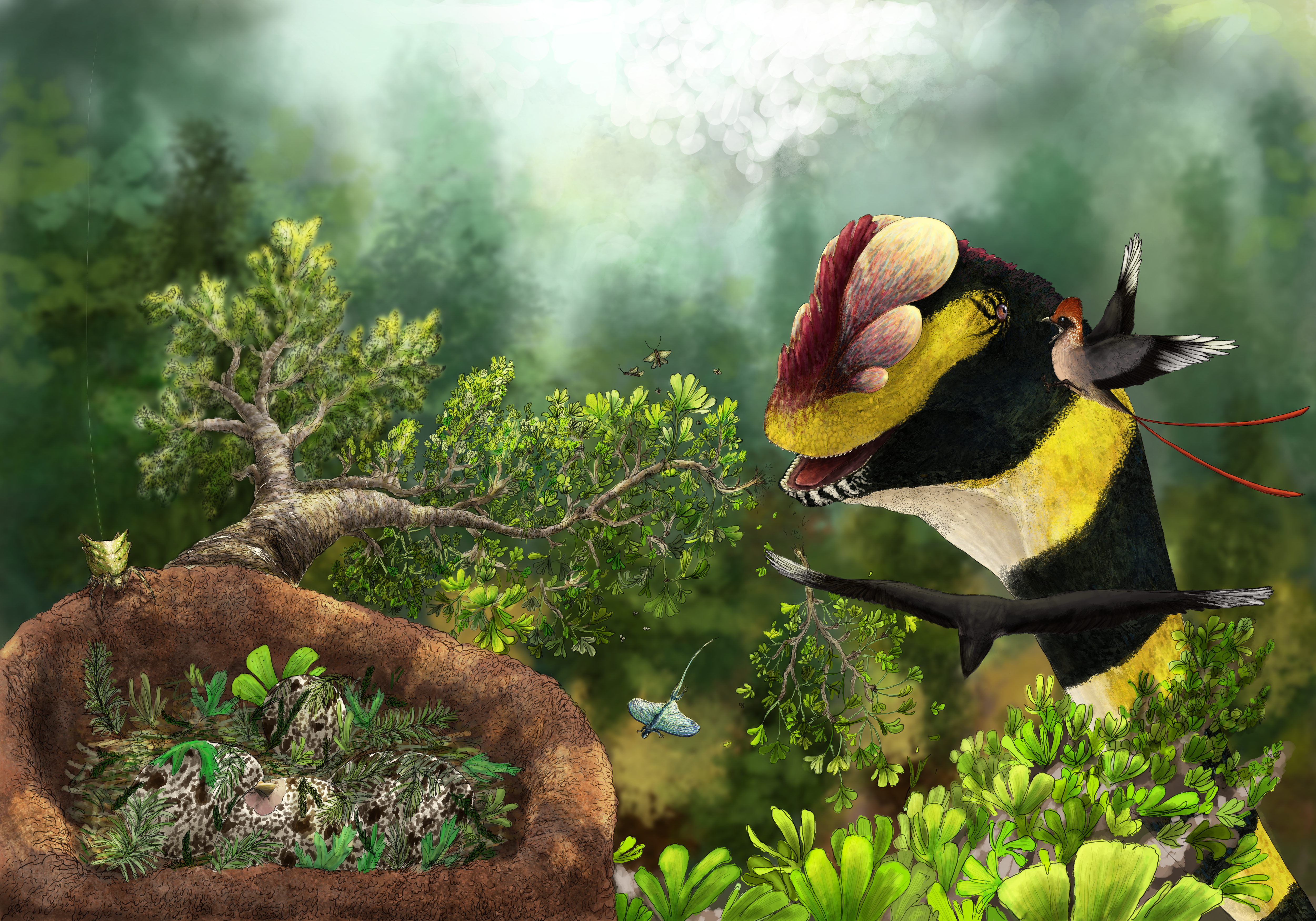 Above: a Yixian scene featuring the gliding lizard Xianglong, the confuciusornithid bird Changchengornis and their nest, and the sauropod Euhelopus.

Good job making it to the end! Even if you don’t remember all the names I spewed at you, I hope you have a general idea of what this ancient environment was like. The Early Cretaceous was an important transitionary period for a lot of animal groups, and we’re ridiculously lucky that the Yixian Formation preserves such a high-resolution window into that time.