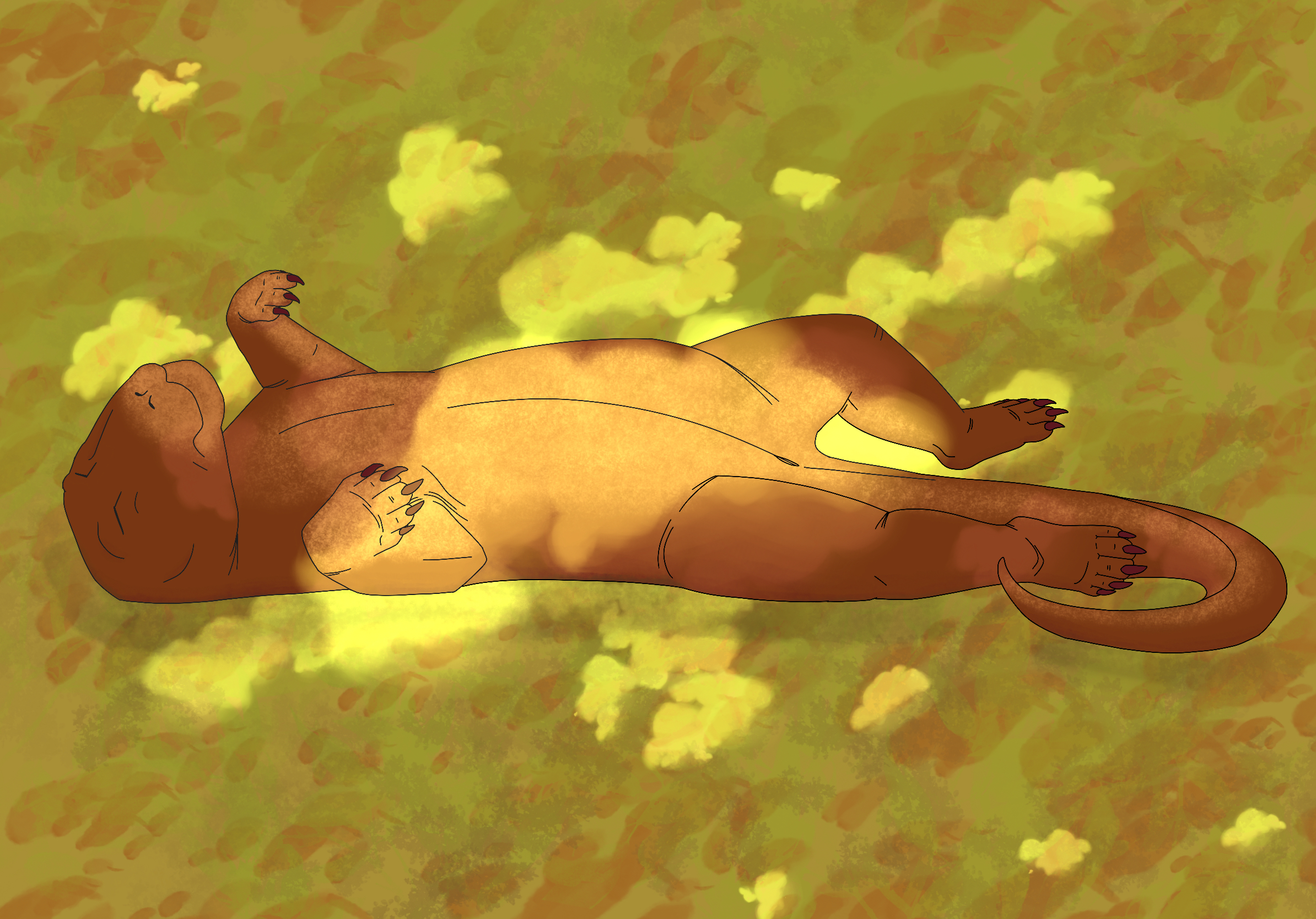 Thermoregulation, or animals’ control of their body temperature or lack thereof, I’ve discussed before in my posts on dinosaur fuzz and the physics of the very large and very small, but only in relation to particular phenomena and not as a concept in itself. In this post, I’ll discuss the different strategies animals employ to thermoregulate, which groups tend to do what, and trends over evolutionary time.

The best place to start is at the two extreme ends of the spectrum: endothermy (warm-bloodedness) and ectothermy (cold-bloodedness). “Endo-“ means “inside,” indicating that the inside of the animal controls the animal’s core temperature, and “ecto-“ means “outside,” indicating that the environment dictates the core temperature. Notable endotherms include most mammals and all birds, while ectotherms include most non-bird reptiles, all living amphibians, and most non-tetrapod fish. (Note the “most” modifier on many of these groups. I’ll get into the exceptions later.)

At a high level, there are tradeoffs to both strategies. Ectotherms can get by on much, much less food: a growing young crocodile needs only 4% of its body weight in food per week, while an adult human needs around 19%; a common lizard needs 6 to 11% of its body weight in food per week, depending on the weather, while a mouse needs 112%! (Small animals are less metabolically efficient than large ones, since they lose more heat to the environment.) However, they become sluggish in cold weather, and can’t exist at high latitudes. Even when warm, ectotherms can’t exert themselves for extended periods of time, and are better suited to an ambush hunting or herbivorous lifestyle. Endotherms are equally active in all types of weather, and can fill niches that ectotherms can’t, such as high-latitude living, endurance hunting, or flying, but require proportionally much more food and oxygen to function. Endotherms also have an extra tool in their toolkit for dealing with disease: fever.

The first animals were ectotherms, and endothermy developed independently in the ancestral relatives of mammals and dinosaurs at the end of the Permian period, around 259 million years ago. Before that–for around 406 million years–the world was populated solely by ectotherms. Even now, over 99% of organisms are ectotherms. It would have been a sleepier world than today’s, with the only nighttime action perpetrated by insects or gecko-like sit-and-wait predators, and no terrestrial animals would have inhabited cold regions, when they existed. On the mammal side of the tree of life, endothermy evolved twice: once in dicynodonts such as Lystrosaurus and Lisowicia, and once in eutheriodonts (the lineage containing modern mammals) as far back as Glanosuchus, a wolf-sized therocephalian from the Late Permian.

In reptiles, endothermy arose just once, in archosauromorphs (ancestors of dinosaurs, birds, and crocodylians). An early example is Azendohsaurus, a wolf-sized herbivorous Middle Triassic allokotosaur, which we think was warm-blooded based on its bone histology.

Since endothermy is the archosaurian ancestral condition, modern crocs are secondarily ectothermic–that is, they descended from warm-blooded ancestors. And they’re not the only branch of the croc family tree to go back to ectothermy: teleosaurs, a branch of the croc lineage from the Jurassic that looked a lot like modern crocs but were a bit more adapted for swimming in open water, were cold-blooded, while the closely related metriorhynchids, which lived fully aquatic lives, were warm-blooded.

So, why do animals slow down when their body temperature is low? It comes down to biochemistry: the chemical reactions that make up metabolism work best at certain temperatures, and generally (up to a point), hotter is just better. Temperature is actually a measurement of the average speed of molecules in a substance, and faster-moving molecules collide with one another more often, allowing more chances for a reaction to happen. Ectotherms can react to temperature on various size and time scales. At the very smallest, they can encourage reactions to occur at lower temperatures more often than they normally would by producing more enzymes (biological catalysts), or they can slow their metabolism by producing less. At the next level, they can change their cell membrane thickness and viscosity, which changes how resources are transported to and from cells, and they can increase the number of mitochondria per cell, so even if each mitochondrion is working at low efficiency, the power output is higher. Another level up, they can change the shape, speed, and strength of their muscle fibers to work better under cold or hot conditions. And at the most macro level, they can move into areas of warmth or shade, shiver, sweat, or engage in other thermoregulating behavior. Even though ectothermy arose first, modern ectotherms are just as highly derived as modern endotherms, and modern ectothermy is a complicated business!

The direction in which an ectotherm compensates for temperature can also vary depending on other variables, such as food availability and predation risk. If all the predators you need to worry about are also sluggish in cold weather, you might as well decrease your metabolism to save energy, but if you have to stay vigilant through the cold, you would want to increase it. Another variable that affects acclimatization and thermoregulation is time. How quickly can an animal make a physiological change relative to how quickly the environment changes? How long are the animal’s generations compared to days or seasons? In this way, the same environment can make different or even opposite strategies optimal for animals that operate on different time and space scales. For example, the Alaskan wood frog allows itself to become completely frozen for seven months every winter, while crocodiles acclimate to colder temperatures and can swim equally fast year-round.

If you’re a tetrapod biased person, like me, you’ll have been thinking in terms of reptiles and amphibians up until now. But fish are also ectotherms, and they live in the cold cold water! How do salmon muster enough energy to jump up waterfalls?

Well, if you’re smarter than me, you’ve realized that that was a trick question. Water just feels colder than air to us endotherms because its high specific heat sucks our heat away more effectively at the same temperature. So the water the salmon is in is the same temperature as the surrounding air, and the salmon’s body temperature is the same as that of a lizard on the bank. That’s not to say the salmon are warm though–they’re highly adapted to be active in low temperatures, using many of the strategies I mentioned earlier. Some fish, famously sunfish, bask in the sun, similarly to lizards. However, since water tends to be very homogeneous in temperature compared to terrestrial environments, fish are often best suited to one temperature, and generally don’t physiologically acclimatize or behaviorally thermoregulate as extensively as terrestrial ectotherms.

Insects can be considered ectotherms as well, and employ many unique behavioral thermoregulatory strategies. Flying insects often have to warm up by shivering before they can take off, since flying requires a high sustained energy output that works better at higher temperatures. Bees regulate their hive temperature by shivering, and can even kill threatening hornets by surrounding them and shivering until the local temperature reaches a blazing 46C (115F). Mosquitoes, which heat up too much when they drink an endotherm’s blood, excrete a little drop of blood, which then evaporates off, cooling the mosquito.

You’ll often hear endo- versus ectothermy described in terms of constant versus fluctuating body temperature. However, many endothermic animals hibernate, estivate, or enter a temporary state of torpor, during which their metabolism slows and their body temperature drops, sometimes approaching environmental levels even among animals that are normally warm-blooded. Animals that do this are called heterotherms (“different heat”), and ones that don’t, including humans, are called homeotherms (“same heat”). In mammals, heterothermy is actually the ancestral condition, and the ability to hibernate has been lost multiple times across the family. In birds, homeothermy is the ancestral condition, and only certain members of Strisores (hummingbirds and nightjars) and Columbiformes (pigeons and doves) have developed the ability to enter a state of torpor to conserve energy. Did you know that certain lemurs can hibernate? I sure didn’t until I started researching this. Culturally, hibernation is associated with cold weather, but in fact many tropical animals do it too. It’s because of science’s northern hemisphere bias! Southern hemisphere = most underrated hemisphere.

As an endotherm yourself, you’re probably already familiar with the various physiological strategies endotherms employ to thermoregulate. To conserve heat, we shiver, fluff up our hair or feathers, contract capillaries in our extremities, and process brown fat. To cool down, we sweat, pant, wallow, and expand capillaries in our extremities. Animals that routinely experience cold temperatures, such as moose and wading birds, have highly insulated trunks but poorly insulated extremities–they keep their core warm while allowing their legs to approach ambient temperature. To prevent the cold blood from the legs from cooling their core too much, they have special arrangements of blood vessels in the legs that act like heat exchangers: cold blood going toward the heart is warmed by warm blood going the opposite direction, keeping each temperature zone isolated.

Over geologic time, the endothermy ceiling just keeps getting higher. We live at the same time as the hottest, most energy-wasting animals ever to live: hummingbirds and bats. They both run at a constant 40C (104F) and require half their body weight in food every day. While hummingbirds are to other birds as crackheads are to normal people, maybe in the future an even more extreme organism will evolve that makes hummingbirds look like they’re standing still!

Some other terms that are relevant to endothermy are mesothermy and gigantothermy. Mesotherms are animals that maintain a body temperature higher than ambient, but often don’t have the same battery of thermoregulatory processes as animals usually considered endotherms, such as shivering or processing brown fat. And as mesotherms get larger, their body temperature gets higher, which is known as gigantothermy; this relationship isn’t seen in endotherms (for example, a 250-pound man and a 100-pound woman can take the same temperature check to be allowed into the office). Notable mesotherms include many non-avian dinosaurs, monotremes (platypuses and echidnas), and leatherback sea turtles. Of course, as with everything in nature, there aren’t sharp lines delineating borders between these categories.

Now for the fun part: exceptions! Every family has a black sheep. For mammals, it’s the naked mole-rat. I mentioned this in one of my earliest posts, and it makes perfect sense when you think about it: the naked mole-rat is naked for the same reason a lizard is naked–because it’s cold-blooded! Body insulation would only hinder an ectotherm’s ability to bask or shed heat.

For non-dinosaur reptiles, it’s the aforementioned leatherback sea turtle, which maintains a body temperature above 25C (77F) even in near-freezing waters. And, like other warm-blooded marine animals, it has a thick layer of blubber!

In fish, there are two notable examples of endothermy: lamniform sharks, including makos, threshers, and the great white, and billfish such as sailfish, swordfish, and marlins. Many lamniform sharks are pursuit hunters, which requires a sustained high level of energy output, which favors endothermy. Great whites, the warmest of the lamniforms, can reach body temperatures of up to 14 degrees C (25 degrees F) above ambient water temperature. Billfish have a stranger strategy: they have a special heater organ near their brain and eyes that keeps their head at an elevated temperature while the rest of their body is essentially ectothermic. Endothermy, ectothermy–por que no los dos!

The page image depicts the wolf-sized Middle Permian (267 Ma) therapsid (ancestral relative of mammals), Biarmosuchus. While it looks similar to the above pictured endothermic Glanosuchus, Biarmosuchus was cold-blooded, and would probably have engaged in thermoregulatory behavior like basking.

I hope you learned some cool stuff about animal thermoregulation after reading this! I certainly did while researching it. It’s a topic that’s often oversimplified, but actually has so much depth and diversity!