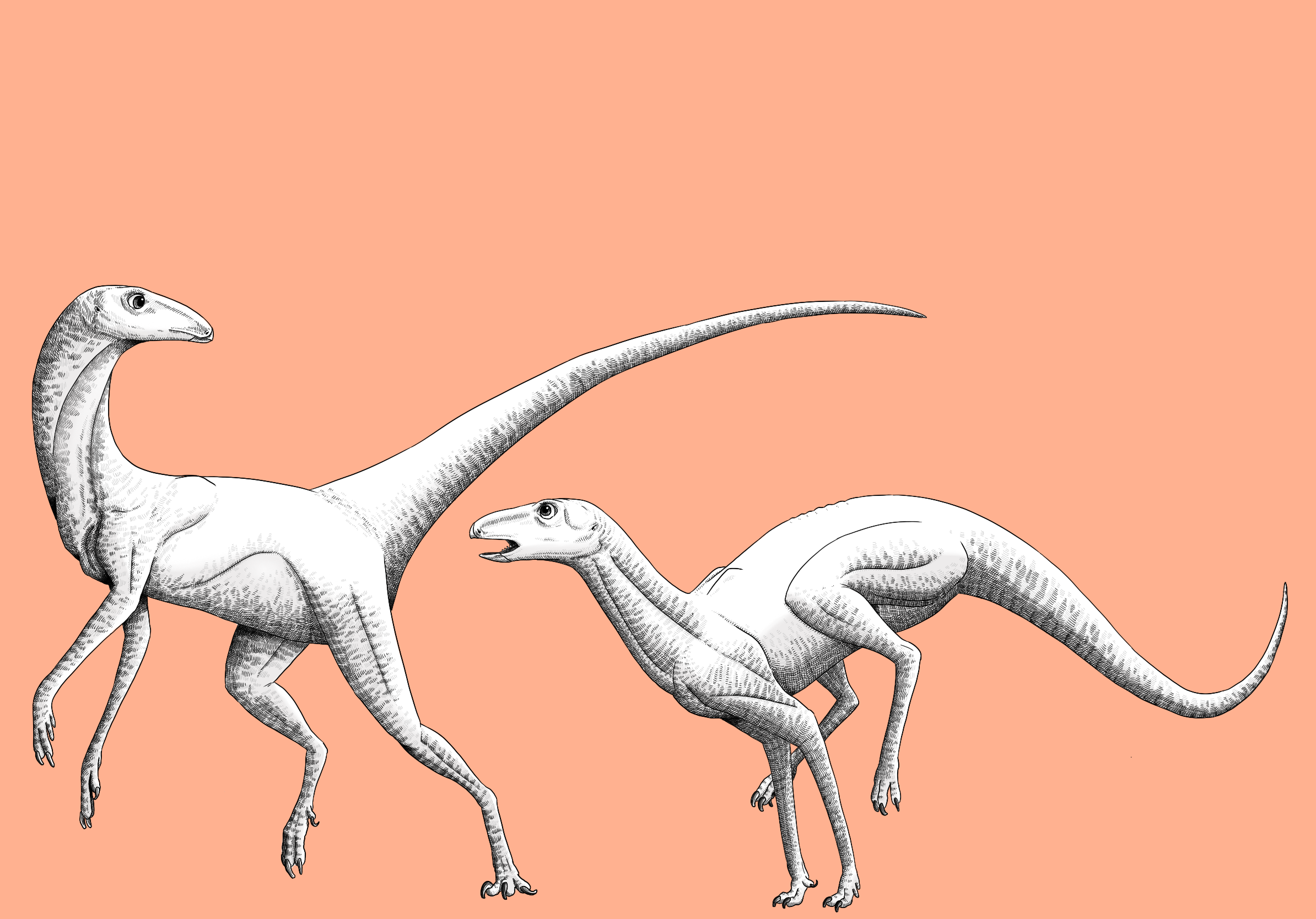 I guess it makes sense that after halving my posting schedule in 2021, it would take twice as long to compile enough art for an art post.

Dickinsonia was a very well-known Ediacaran animal closely resembling a tablecloth. It lived by anchoring itself to a spot on the hard, thick bacterial mats that covered the sea-floor, and doing…something…to cause the bacteria directly beneath it to die, so it could absorb the juices before moving to a new spot and repeating the process. However, while un-anchored it would’ve been vulnerable to water currents, leading to lots of fossil specimens that have been folded, stretched, torn, or otherwise deformed.

Interestingly, Dickinsonia is not exactly bilaterally symmetrical: instead of its left and right halves being mirror images, the segments are staggered like footprints. This, along with its general weirdness, sparked debate as to whether it was an animal, a plant, a fungus, or a member of some other ancient kingdom with no living members. Recently, scientists were able to identify cholesterol molecules in a Dickinsonia fossil, indicating that it was probably an animal. We still don’t know what kind of animal though.

This was a speculative evolution thought experiment in which I tried to create a future “terror bird”. Real terror birds, formally known as phorusrhacids, lived in South America from the Paleocene, with some surviving all the way into the Pleistocene (62 to 1.8 million years ago). They were related to the modern seriema, a long-legged snake-killing bird, and filled the niche of apex predator in their environment shortly after the K-Pg extinction before they were mostly displaced by the rise of cats and dogs.

An obvious candidate for re-evolving a terror bird would be the seriema, but I wanted to go a slightly different route, and chose as my starting point the Kori bustard, the heaviest modern flying bird. Here’s my scenario: a couple million years after the sixth extinction left huge vacancies in global ecosystems, a descendant of the Kori bustard coevolved with a descendant of the dik dik (a tiny deer) in a predator-prey arms race, with both achieving huge sizes. Since the terror bustard is quite large, it has lost its plumage for thermoregulation purposes.

The lineart for this was actually done by u/SandHanitizer55 on Reddit. It was just a quick pencil sketch, but I loved the concept and the dynamic poses, so I cleaned it up and colored it. It looks kind of like a postcard from an alternate universe Kansas.

This was one of the pieces I did for my post on the paleontological merits of fossil Pokémon. Desmatosuchus was the largest known aetosaur, a family of pig-nosed, low-slung, armored, herbivorous croc relatives from the Triassic, and it, crossed with a tabular iceberg, was the inspiration for the sixth-generation Pokémon Avalugg.

This was the other piece I did for my Pokémon post. Amargasaurus was a rather short-necked sauropod from Early Cretaceous Argentina, whose most conspicuous feature was the double row of rear-pointing elongated neural spines along its neck. While it was previously thought that the spines may have supported a skin sail, osteological correlates show that they were more likely keratin-covered, like a cow’s horn.

I did this for my Obscure Dinosaur Profile on Shuvuuia, which was in the limelight due to a new study that came out suggesting that this little dinosaur had owl-like night vision and hearing.

I drew this bird because I was looking for art for my post on the Messel Pit, and this bird had been drawn literally once before, so I felt I should help to remedy this severe underrepresentation.

Falcons are more closely related to songbirds and parrots (in the clade Australaves) than they are to eagles, hawks, and owls (which are in the clade Afroaves); they just look similar due to convergent evolution. In broad strokes, eagles tend to be fish specialists, while hawks are small-mammal hunters and falcons prey on other birds. The falcon method is probably the coolest–they attack the wing of a flying bird, which spirals down like a crashing WWII plane, and is killed by impact with the ground. Thus, falcons can take down animals larger than themselves, while eagles and hawks go for prey much smaller than themselves.

Secodontosaurus was a sphenacodont pelycosaur (primitive mammal relative) from the Early Permian. It was related to the much more famous Dimetrodon, but was a tad smaller and had a much longer face, with slicing, rather than conical, teeth. The teeth in the front of its mouth faced outward, kind of like certain plesiosaurs or like Masiakasaurus; clearly it was doing things differently than Dimetrodon, but it’s debated whether Secodontosaurus was a fish specialist like a croc or a spinosaur, or a burrowing-animal specialist like a fox. Pelycosaurs were cold-blooded and thus would not have needed a full coat of fur, but I’ve given them whiskers, which would be useful for either hunting style. Interestingly, pelycosaurs would not have had any externally visible ears, not even ear holes or ear drums, but they did have a very primitive internal ear, which would have allowed them to dimly sense vibrations conducted through the ground.

Before the Mesozoic, mammal relatives hadn’t yet lost their tetrachromatic vision and pigment-producing abilities, so it’s possible that these creatures were much more brightly colored than mammals are capable of being today. Bright colors today are such a non-mammalian thing that the male here looks almost amphibian, while the female looks much more mammalian. Perhaps that’s also due to his more sprawling posture and her upright posture; I’ve hedged my bets and given them some postural flexibility, like modern crocs, which are capable of both sprawling and high-walking locomotion.

I just love the Triassic period. Situated between two mass extinctions, there are tons of creatures endemic to the period that are very specialized and cool, but have no living descendants. One of those was Silesaurus, a quadrupedal, leggy dinosauromorph, or close relative of dinosaurs. It had a small beak in the front of its mouth and teeth in the back, and would have foraged for leaves, bugs, and small vertebrates by pecking, kind of like a chicken crossed with a greyhound. I think it’s really interesting that while this body plan is common among mammals, it never again occurred among reptiles after the silesaurids. The closest things would be the protosuchids (like my triathlon creature, Velosuchus), which lived from the late Triassic until the Cretaceous, but protosuchids had much longer hind limbs than front, and their front limbs were plantigrade, indicative of a less cursorial lifestyle. Silesaurus walked on two toes on its front feet, an adaptation for swift running similar to cloven-hoofed mammals.

Yes, these Silesaurus are pretty shrink-wrapped. I was going for a shorthair look like an antelope or greyhound, but it kind of just ended up looking like weird skin.

Biarmosuchus was a wolf-sized ancestral cousin of mammals that lived 267 million years ago. It was cold-blooded, and thus would probably have engaged in thermoregulatory behavior like basking. Interestingly, nearly every genus of biarmosuchian exce[t for Biarmosuchus itself is monotypic, or known from only one specimen. Were they rare in their environments, or did they just not preserve, or are we looking in the wrong places?

For this one, I was trying to combine aspects of cats and lizards.